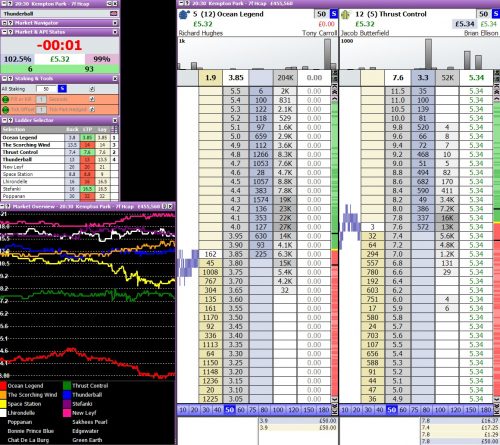 Ok so after all my mind-set changing antics it occurred to me that I might have some emotional attachment to the colours on the ladder.

This could be wrong of course, but I’m going to mix it up!

Mainly on the lay side of the book (probably through being shafted in the past). So a subtle change from that evil pink was on the cards. Hopefully anything I might have subconsciously ingrained in me, telling me its dangerous may be toned down. Along with a nice purple finish to calm me down? Will it impact on the agressive reactions I sometimes make? I hope so…

I can’t say it’s worked as this week I’ve had a few £30 blips (a right pain in the arse). Bringing the average down. Who knows if it’ll help in the long run, it can’t make things worse surely.

The most recent poll I put up is over and the results are in. Thanks a lot to all who took the time to vote!!

So given the circumstances and the question, the results look about right if were to believe that a small percentage of traders are successful due to their perception and mindset of trading. Further more its the minority.

So what is the right answer? Given all that I’ve learnt if the question was read properly then the correct answer is in fact ‘I don’t know’ this is probably confusing to about 17 people who voted right now so I’ll explain…

Given the question and the picture there really is a small amount of information on offer. I mean for a start you haven’t a clue what the favourite is doing which is often influential and just because there’s £5,600 sat on the lay side above a price band it means sod all. There’s 3 minutes to the off so the live coverage might not even be talking about the race were trading.

Whats more: 3 minutes is a long time for the price to be held! The last traded price (LTP) is still near the top of its traded volume range. This is probably the reason some voted ‘Good’ and while I can see why they did, I wouldn’t really go as far as feeling good about the situation. I mean anything can happen in the markets. Depending on liquidity, it really doesn’t take a lot to move a price.

I think the point I’m trying to make here is; it’s quite important to accept you don’t really know what will happen next and shouldn’t really ‘feel’ about anything. I would be keen to know if the other 4 that voted ‘I don’t know’ were either FT on Betfair or relatively successful? Obviously not that many following the blog at the moment!