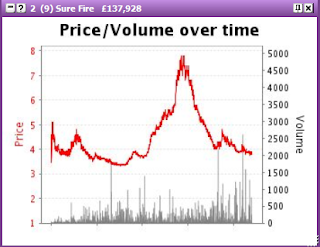 This Barney Curly runner had my pants down today. Gutted.

You can see: Around 5.6 it would seem some cash was mounting up for this horse. I duly backed for £400….

And then BANG! All the money vanished, heaps appeared on the lay column. Leaving me scrambling for cover at around 7.0, that hurt. …..Absolutely gutted in fact.

I feel completely mugged off. I should have known better and seen this coming to some degree or another. I’m going to have a few days off after a frustrating week and today’s tiring experience. At least I managed to stop myself from going in-running. If that’s a positive even. This has been one of my toughest losses pre-race (-£72). At this point in time, it’s a fair chunk of money to me.

Today on the whole was really stressful for me.

I found and it showed up in the results too. Up until the national, I was having a good day. In fact the best I’ve had in a while. After the national I suffered a -£43 race which pissed me off. Possibly because of this I was starting to lose focus, and control. Managing to lose in 5 markets consecutively afterwards. From about £75 up prior to the national back into -£20 for the day some 5 or 6 races later.

I counter this a little by having a break. Shook myself out and come back with a better attitude to get myself back in the green. But only by £10 before the last at wolves. And then that on the Curly runner above. What a dick.

All-in-all, 41 markets later and I’m down by £62. Worn out, wound up… distraught. Such is life, I suppose if theirs a positive to be had in between my bouts of loosing this would be it:

I learnt quite a lot today. My mindset and getting caught out, not redefining risk properly. I did make something like £105 today. Just a shame I lost £167 through being a twat. (that’s not including all the +/- races in between, just an overview). On wards and upwards I guess!

2 thoughts on “Absolutely Distraught… What a C***ly”