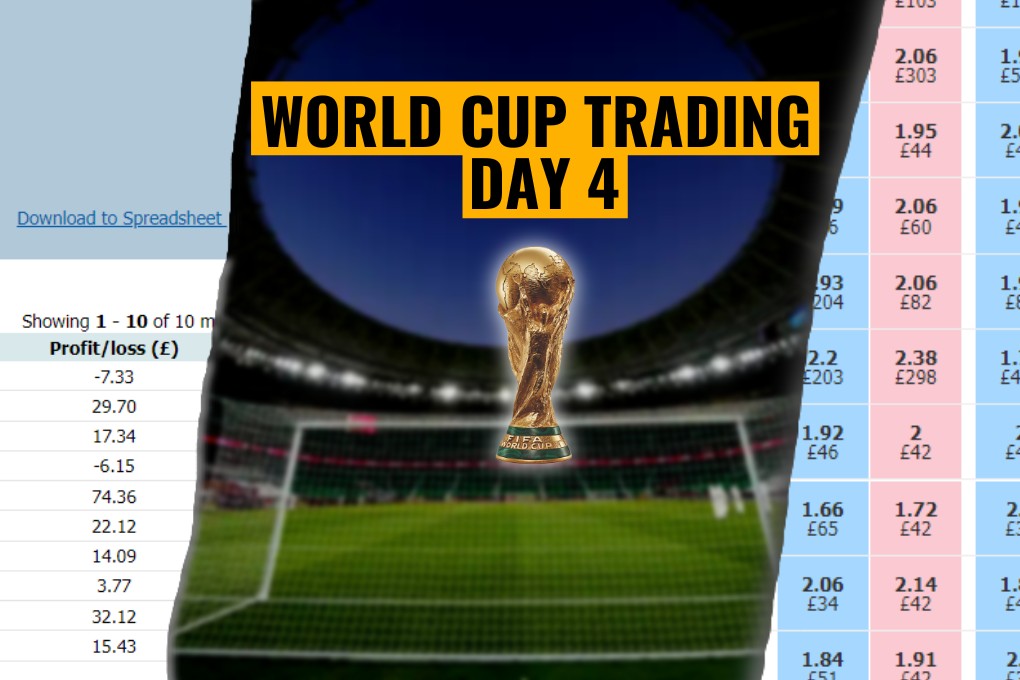 We’re full steam ahead at the Qatar World Cup now. Wednesday is headlined by Spain, Germany and Belgium. Will we see any shocks I wonder..

Belgium are decent value in the outright market in my opinion. Probably don’t expect them to win, but I don’t see them being bigger than Germany and Netherlands (even though I like the Netherlands). I reckon Belgium are a decent trade. They are a top class side with a superb squad, but obviously they do lack balls in the big games.

The schedule for Wednesday is:

Are Croatia a team to take on? They will have plenty of layers at around 2.08/2.1 here in my view. They have been average since reaching the 2018 World Cup Final, but did top their Nations League group this year. France were woeful in that though, and they did still lose to Austria. I have to say Croatia are a team to take on for me, and I’ll be looking to get against them in the match odds market at some stage. Keen to keep stakes small though because obviously we’re relying on Morocco here. 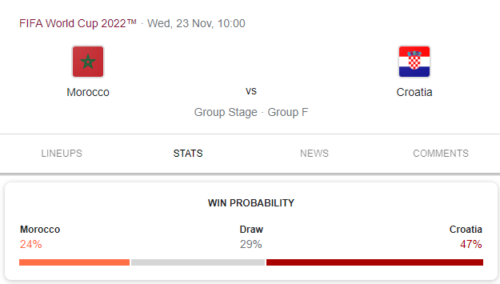 Morocco have brought in a new manager who seems to have calmed the dressing room and made players return. Morale in the squad will be high, but let’s not get ahead of ourselves here. They are still pretty average. I expect them to put eleven men behind the ball and play for a 0-0 draw. Croatia have an excellent midfield, but if Morocco can stop them there, they will get a result. Croatia are average at the back, and haven’t got a natural goalscorer. Like I said I’m keeping stakes small, but I’m keen to take on Croatia for the most part and the aim will be picking points of accelerated time decay to get max value, and then I’m also keen trading Under 2.5 goals down early, along with a very cheeky small interest on 0-0 in the Correct Score market.

Group E is going to be an interesting one with Germany and Spain in it, but the chances of either of them getting knocked out are very low with Japan and Costa Rica in the group with them. Germany has been unreliable in many ways recently. They exited Euro 2020 early and then lost to Hungary in the Nations League, for example. I reckon Spain will top the group, but I also feel Japan won’t challenge Germany here. They have been losing to the likes of Saudi Arabia and Oman in their qualifying. They could have still topped their group except their drew with Vietnam in their final game, but it’s very weak qualifying at the same time. Germany are worth keeping on side at around 1.5. Again it’s going to be about finding the right moments to get on, wait for stalling points and times they are well on top rather than have the market working against you. Germany plays an open game in general, but with Japan limited up front, I’m going to skip the goals markets here.

Depending on the half-time score, could be one for a few second half strategies from the Football Course. Not a game for big stakes though.

I look at this game and feel it’s best to take it off. We’ve a tonne of football, and with Spain very short favourites, I just don’t see a major edge here. Another reminder that you don’t have to trade every game at this World Cup..

I’ll still be watching the game because Spain are definitely an interesting side, and I’ll gain knowledge for the Germany game later in the group, which will be very high profile with high liquidity. The plan here is to do nothing in the first half, and see where we stand at half-time. Let’s see if the market gets interesting, but I expect Spain to win easy. Could be worth getting on some fancy handicaps if Spain lead at half-time; I’d expect more goals in the second half if Costa Rica open up, but with Spain 1.19 nothing jumps off the page before the off.

Interestingly, Germany and Belgium are very close in price together. Which one would you prefer? I’d go Germany I think because Japan look weaker than Canada. Belgium has a superb squad, but do a little research, and you can see the cracks. The defence is ageing and of course who knows how fit the likes of Hazard and Lukaku are. Canada came through the CONCACAF, but they were known for being solid at the back. Again, it has to be said it’s hard to judge the standard of CONCACAF, and it looks weak, so we can’t just assume Canada are rock solid at the back; however I do like the Under 2.5 goals early trade here.

We are going to be starting at odds again, so we might see a nice quick move from around 2.1 into odds on quite quickly, should Belgium start slowly. Belgium has a tonne of goals in them, but I can’t see them opening up the game very early, and Canada are going to be very negative to start with. I don’t see any angle in the second half here, so I’m just going to stick with the Under 2.5 goals early trade and keep an open mind for the rest of the game.