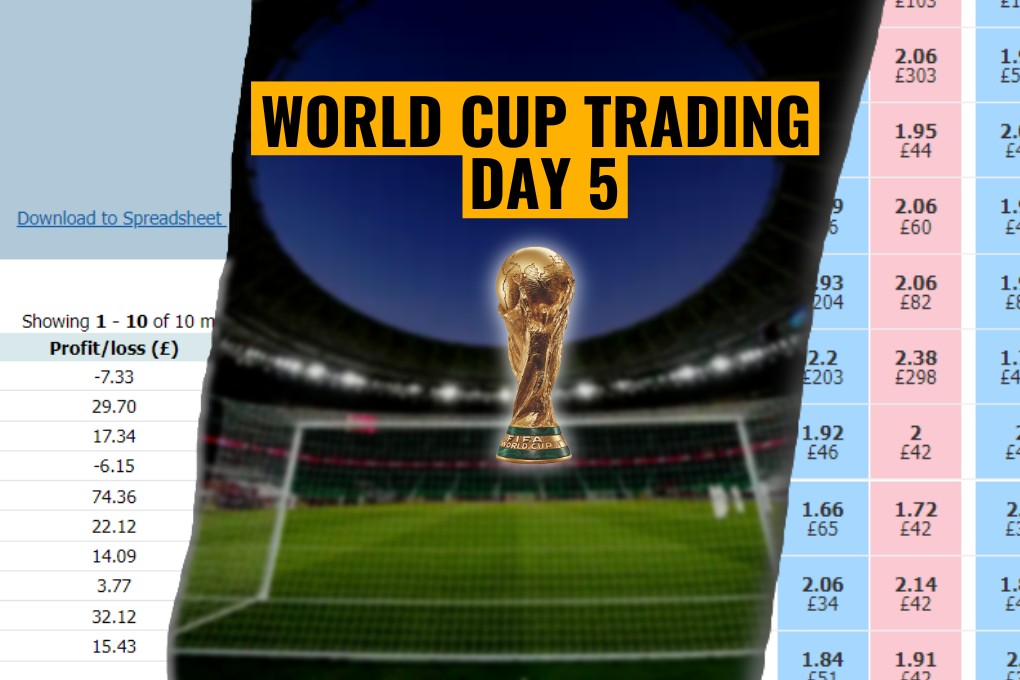 The Samba Boys finally arrive on Day 5 at the Qatar World Cup! All the headlines will be focused on Brazil, but they don’t play until 7 pm and we have a full day of trading to get through…

Liquidity and trading has been enjoyable so far at this World Cup. How have you been finding it? Let me know in the comments below!

After today’s games, we’ll have finally seen everyone play, and we can probably get a little more confident with performance levels etc.

The Schedule for Thursday is;

If you read my Outright market preview, you’ll know I’m a big fan of Switzerland. Especially from a trading point of view in the Outright market. I just think there’s a lot in their favour for a decent trade. Obviously, you’re looking at odds north of 120.0 so stake accordingly. I just feel the draw will be kind to them. They have a difficult group, but things can open up a path to the Quarter-Final from there. Brazil will top their group, so Switzerland v Serbia will be a massive game, but we have to get through Cameroon first.

Switzerland was unbeaten in qualifying, sending Italy to the playoff and eventually meaning Italy weren’t on the place to Qatar. They did really well in the Nations League too, improving as the group went on. They beat Spain and Portugal towards the end. Cameroon very nearly missed out on the World Cup. Their qualification was one of the most dramatic against Algeria in a playoff. They are solid at the back and will mainly focus on defending, as we saw at the AFCON. I am a fan of Switzerland, but the prices like right at 1.78. I’ll be looking for compression points and try to get on them at some stage. The trade that stands out here is our old friend under 2.5 goals early. Cameroon will set up quite negatively, and Switzerland won’t attack early. This game is made for the early Under 2.5 goals trade. If that doesn’t go well then my view of the game will be completely thrown off from there, and I might need to reassess, but I’m bullish on this one.

You have to say Uruguay has some cracking options in their squad. Bags of talent, I fancy them to do reasonably well. Wouldn’t be surprised if they came close to topping the group, maybe. They have to deal with Brazil and Argentina in qualifying, and they are always unlikely to finish ahead of them over a long league period. They’d give them a good go in 90 minutes!

All the focus for South Korea will be on Son from Spurs. He had an injury leading into the tournament, latest reports are he’s training, but that’s one to watch. We’ll see a big market reaction if he’s not starting.

Nothing stands out in the goals market to me here, so I’m skipping that. Happy to sit on my hands in the first half in those markets and maybe play some time decay in the second half. I really fancy Uruguay to win, but it’s that age of problem of the market working against you. Finding the compression and stalling points will be key, but my plan here is basically support Uruguay (hopefully at the right times) in the match odds market. Outside of that, I don’t see much value. Uruguay looks very big at 1.85+ IMO.

Good old Ronaldo. What an interview with Piers Morgan. He’s no future at United now, but surely it’s caused issues with Portugal too. I’ll be keeping an eye on him and Bruno and see how that goes. Ghana were useless at the AFCON. Their group looked shockingly poor too. I don’t have a strong opinion on this game. Only thing I would say is although Ghana are bad, Portugal drew 0-0 with Ireland who are woeful and had to go through the playoff to get here. I wouldn’t be comfortable with them at odds on. I’ll keep an eye on the market, but this looks like a good chance to take a game off.

Brazil and Serbia are quite attacking, so I’m going to stay away from any Under 2.5 goals trade or scalping any goals market here. Could be an idea to keep the Outright market open during this game for any Lateral Thinking options there, which we’ve discussed in the Football Course.

Brazil looks a little short at 1.48 or thereabouts. I don’t have an opinion on the match odds, I just want to stay away from the goals markets, really. Maybe with that in mind, because of the lack of interest in the Portugal game earlier, this looks an ideal chance to have a full evening off. But then Brazil are always gonna pull you back in! I don’t have a strong opinion here, so it’s about discipline for me. Enjoy the evening!