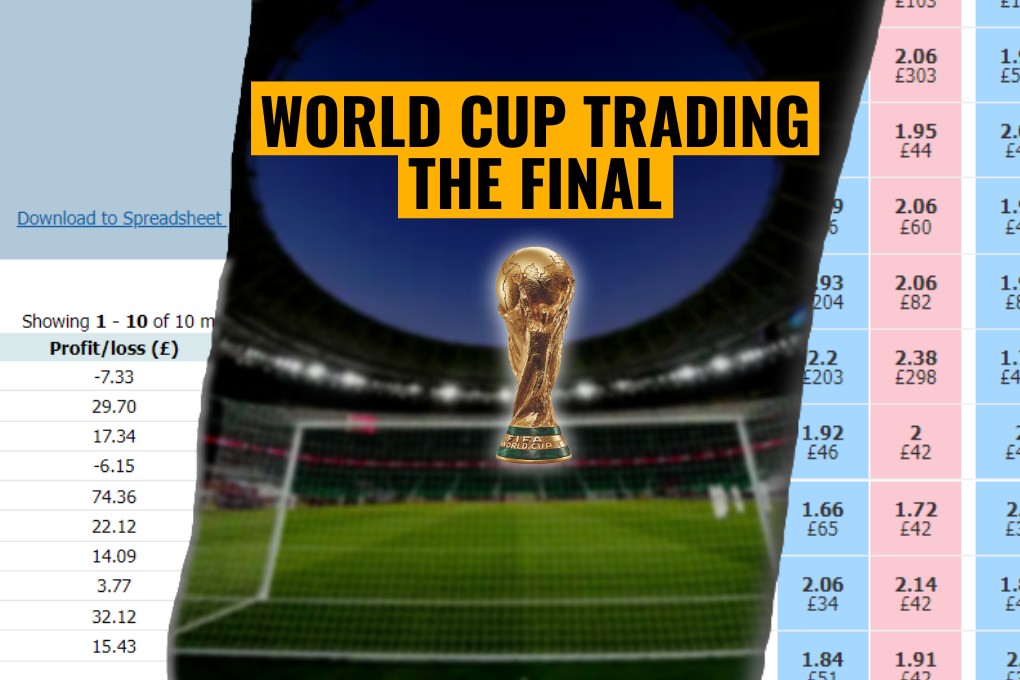 The FIFA World Cup Final lands on Sunday in Qatar, and it’s a belter. Is this the best Final ever? I would say there’s a very good argument that it is.

I know we all hype up current events as the “best ever” all the time these days, but this Final has it all. The greatest player of all time going for a World Cup in his final game for Argentina v France who are going for back-to-back World Cups. Mbappe and Messi going for Golden Boot and more than likely the Ballon d’Or. Not only that, the market can’t split them. I think, when you factor in the betting, this Final delivers on everything, so I’m calling it the best ever. Not often I do that.

Let’s get into the detail…

The schedule for Sunday:

Shame the game kicks off at 3pm and not 7pm, but that time is better for trading. Easy to be more alert in the afternoon. I said above the market can’t split them. At the moment, Argentina is 1.98 and France is 2.0. It doesn’t get much better than that going into a World Cup Final. In the match odds market over 90 minutes, they are just as close. Argentina is trading 2.9 with France 2.92 and the draw is 3.15. There have been some rumours of an illness in the French camp, but don’t believe everything you see on social media. I think if it was serious, we’d see it reflected in the market.

Argentina has been very kind to us so far in the tournament. We were on them in the Outright market, and their games haven’t been difficult to trade. They have started games reasonably slowly and offered plenty of excellent early under 2.5 goal trades. I would expect we can land that trade again here. We have two cracking sides going forward, but I’m still expecting a cagey start. The average first goal in Argentina games has been 37 minutes, while in France games it has been 32 minutes. Under 2.5 goals is trading 1.64, and we can see a pretty quick movement in. I’d let the game settle for the first five minutes though, and see do we actually get a cagey start – don’t just dive in. Make sure the play on the pitch reflects your opinion.

From there, I’m going for Argentina to win. My ideal game would be no goal in the opening 30 minutes, Argentina to finish the first half strongly as we hit a compression point in the market, get on them, and they lead 1-0 at half-time. IF that happens, then I think we’ll see the game open up, and the second half strategies from the Football Course come into play. That’s in an ideal world though, and we know nothing is perfect. I would settle for no early goal and an Argentina win.

Anyone that’s looked at the xG figures we see that there isn’t much between the sides going forward, but there’s a big difference at the back.

That’s a fantastic figure for Argentina at the back, showing they have completely controlled their games. I reckon Messi goes down as an all time great with a World Cup win…