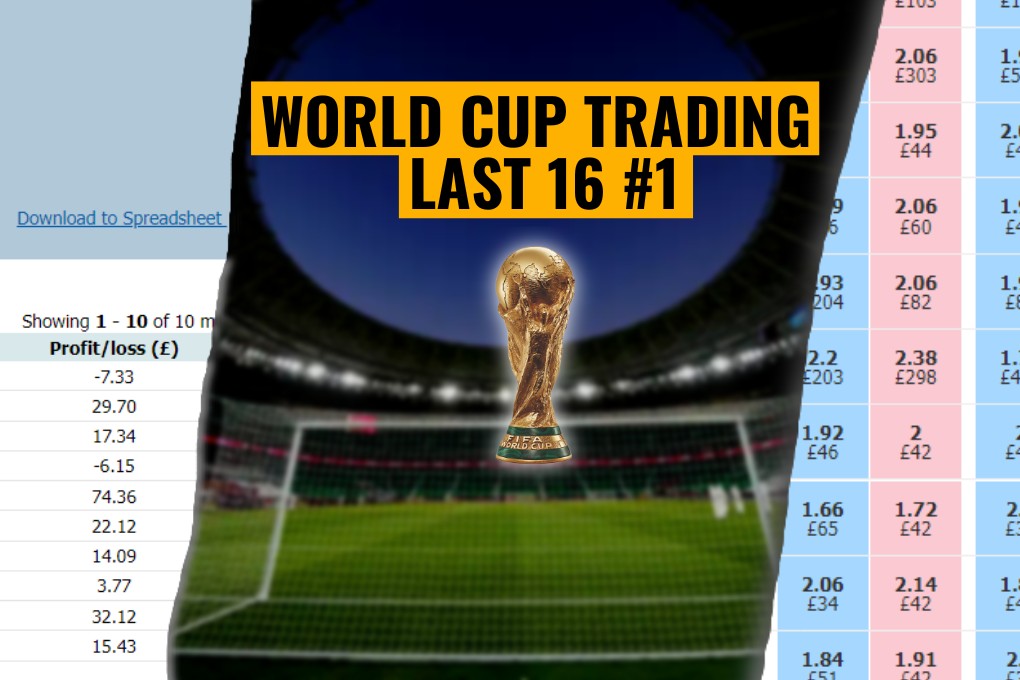 The knockouts are here! The World Cup has been a cracking tournament so far. I’ve seen tweets saying it’s the best ever.. early days of course, but it’s been brilliant for drama.

Who would have thought Germany would get knocked out the other night? Talk about shock, especially with Spain 1-0 up against Japan too. I wasn’t too bothered because we landed some very nice goal bets in the second half of the German game with them 1-0 at half-time.

The group stage was very enjoyable, but the knockouts will be too. One game to focus on at a time, and a more relaxed schedule. Fingers crossed we land some nice trades.

USA have done well to get here, but it was always between them and Wales, and Wales were poor. Netherlands are a side that have underwhelmed me. My opinion on them coming into the tournament was they are full of goals and their games would be entertaining based off their qualifying and Nations League games, but they have been relatively boring compared to what I expected. When they took an early lead against Ecuador, they completely went into their shell and finished the game with an xG of only 0.11. They beat Qatar 2-0, but probably should be scoring more there. USA have been very cagey, and it’s hard to see them changing their tactics here.

I know Netherlands have bagged a goal in the opening 30 minutes in two of their three games, but I really fancy the early under 2.5 goals trade here. I would even push the boat out for a small stake and go for a 0-0 trade in the correct score market. USA have been fairly rock solid at the back and held England to a deserved 0-0 draw along the way. They will start very negative, and it seems the Netherlands are happy to be more solid at the back, even if that comes at a cost going forward. I think this game screams no goals, especially in the first half. Of course, allow the opening five minutes for play to develop and confirm the opinion, but this one stands out. Confident early unders play. Smaller stakes, but 0-0 at half-time too. For the second half, I’ll try to catch some accelerated time decay in the goals and match odds market, but the first half will be the focus.

What price Australia were here after losing their opening game 4-1 against France? They sent Denmark packing and full credit to them. After losing their opening game too, Argentina have completely bossed their two games. Not only were they very impressive going forward against Poland they have been rock solid at the back too. Argentina are expected to win here, doesn’t take a genius to work that one out. They are very short too, so I’ll be avoiding the match odds market.

I’m going to decease stakes for this game, because there is clearly a big gap in quality between the sides. Under 2.5 goals early is definitely an option for a trade here though. Australia will be very cagey, definitely negative with their tactics and their xG figures have been very low in their three games. Argentina haven’t opened up in any of the first halves this tournament, they have been happy to grow into games and they have completely bossed the second halves. I reckon we could get a quiet start here before Argentina take control. Under 2.5 goals is trading odds against at 2.12 so we could see a quick move in.