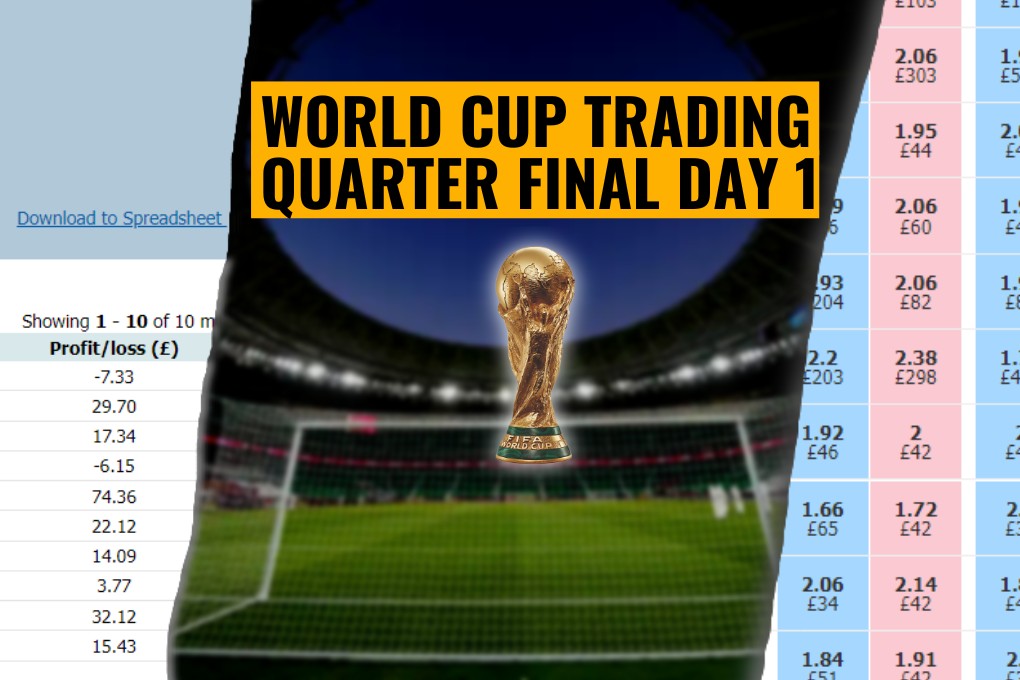 Everything has pretty much gone as you’d expect it in the Last 16 stage apart from Morocco beating Spain, and that has given us some tasty Quarter-Finals. Saturday is going to focus around France v England, but Friday is a cracker with Brazil and Argentina involved.

The schedule for Day 1 of the Quarter-Final is:

Nice way to kick off the Quarter-Finals with the tournament favourites. The Last 16 couldn’t have gone much better for Brazil, an easy 4-0 win over South Korea, and they were able to take the foot off the gas in the second half. That was game-over, especially trading wise, and the only highlight was Roy Keane giving about the Brazilian dancing! That was light work for Brazil though, and compared to Croatia needing extra time and the mental stress of penalties, that should give them a slight edge coming into this game.

I’ve no opinion on the goals market here because I want to stay away from trading down or scalping unders. My view on this fixture is I really don’t like Croatia. I’m sure any fan of xG would say the same. The 1.43 on Brazil isn’t a price that I’m going to be lumping on, but I will be looking to get on Brazil at some stage. Hopefully they don’t score too early, and we can get a nice price at a compression point. Although Croatia got a 0-0 draw against Belgium, their xG conceded was over 3 and if they play even close to that level I believe Brazil will hammer them. Maybe Brazil with a 1-0 lead at half-time would be the ideal set up for some second half strategies from the Football Course. I’m going into this game expecting an easy win for Brazil, and while the media might over-react to a 4-0 win or something when I look at the stats here, I would be less surprise if they “only” scored once or twice.

I have very similar thoughts here to the Croatia v Brazil game! Argentina have been playing MUCH better football than the Netherlands, and if you like xG you’re basically only going to have one opinion here. Netherlands haven’t performed well at this World Cup. They only created an xG of 0.11 against Ecuador, and I know they took an early lead and tried to hold onto it. But Ecuador scored the equaliser with plenty of time left and Netherlands had no response. Netherlands are only marginally creating more than they are conceding (total xG created is 4.94 versus 4.68 conceded). Argentina have been very good in front of goal in their last two games, and seem to be creating more as the tournament goes on. For all the limelight is on Messi, Argentina have been really impressive at the back. They have tournament winning figures at the back – they are rock solid.

Argentina at 2.28+ are a cracking bet in my book, however there is one change between this game and the earlier game. Argentina haven’t started their games in full attack mode. They have basically scoped out their opposition in the first half and controlled the game in the second to win. Even against Australia, it took them until the 35th minute to score. This gives us a nice opportunity to trade under 2.5 goals early in my opinion. Netherlands will start cagey, and they haven’t really been in full attack mode at all this World Cup. Under 2.5 goals is 1.66, and we can see some nice early movement down there. After that, it will all be about getting on Argentina at the right compression point and if Argentina lead, we can see some late goals here as they counter perfectly. I’m quite excited about this game, and the day, as I (hopefully) see it going well!