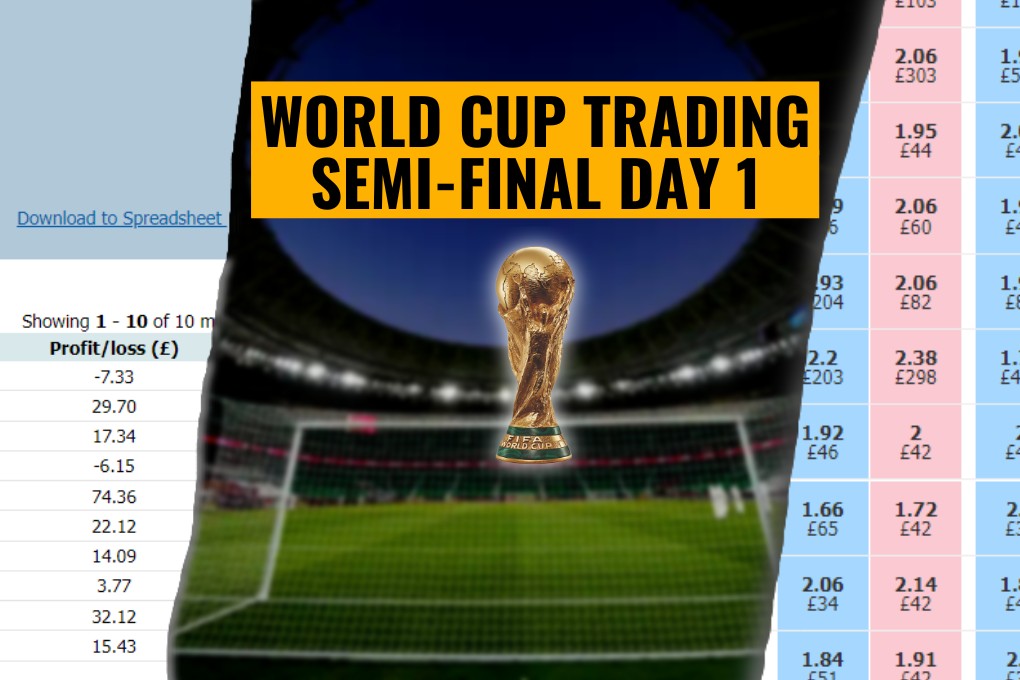 The Semi-Finals roll around in Qatar on Tuesday. This World Cup has been loaded with drama, and hopefully, the Semi-Finals are just as good as the Quarter-Finals.

Argentina and Croatia were heavily involved in that drama, both needing penalties to get here. In trading terms, it was a case of two very different games. We didn’t get the Brazil goal, and although I caught some compression points, had to trade out for a small loss. The Argentina game was fantastic though! No early goal meant a nice trade on under 2.5 goals and then Argentina going 2-0 up gave us a nice position in the match odds too. The way the game finished just highlighted again the importance of locking in profit.

I’m looking forward to the Semi-Finals!

The schedule for Tuesday is easy:

Might as well start with the elephant in the room. Croatia has been exceptionally lucky at this World Cup. They were battered with Belgium and Brazil, but ended up with a 0-0 twice. If you’re a fan of xG; you’re going to think that they are there for the taking. Here are some highlight stats from looking at the xG figures:

Croatia’s best chance in my opinion is a draw and penalties here. They might not have much in the tank after two penalty shoot-outs though. With Argentina needing extra-time as well though, I don’t see a major fitness/freshness edge.

I like Argentina to win at 1.93 – once again, it’s just about picking and choosing what moment you’d like to get on them. I reckon, once again, they’ll ease their way into the game and take over late in the first half or in the second half. Under 2.5 goals looks a very nice option for an early trade here too, starting from a price 1.62 we should see a reasonably quick move in. Just let the game settle for the first five minutes and make sure we do have a cagey start. In an ideal world, we’ll see no goal in the opening 30 minutes before Argentina hit a nice compression point and take the lead.

We’ve done well with Argentina so far in Qatar. Hopefully, that continues.