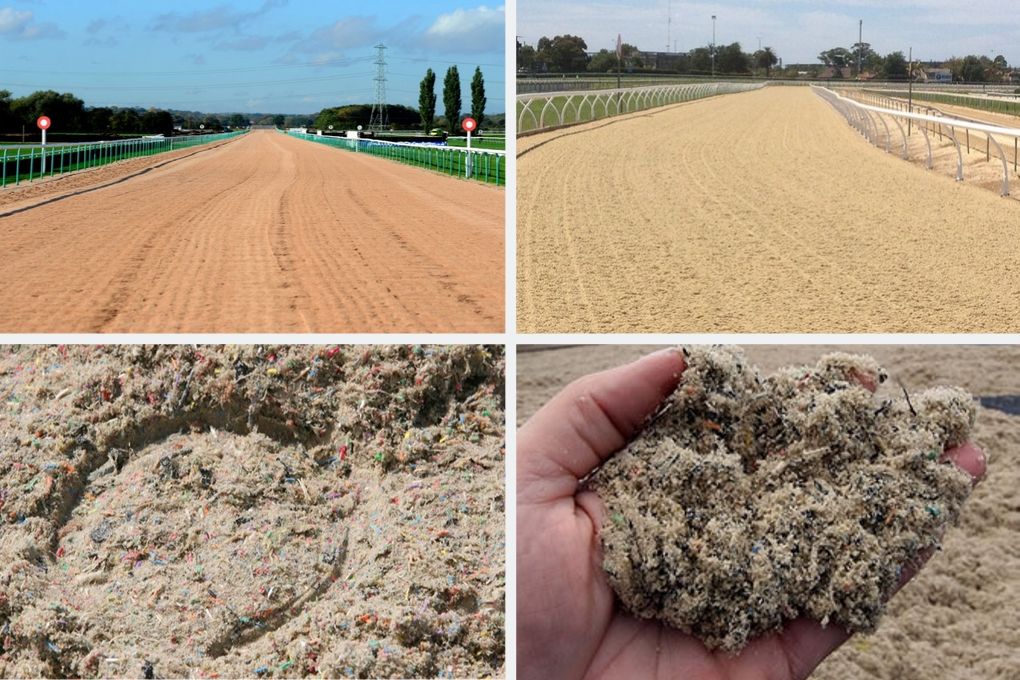 All Weather Racing is a massive part of the UK Fixture List. Six tracks use All-Weather surfaces.

However, there’s a massive difference between the different racecourse surfaces!

In this article, we’re going to explain the differences between Polytrack, Fibresand and Tapeta, along with a description of the UK All Weather courses…

Did you know that all weather racing was originally meant for the jumps!? Not many people realise this.

Back in the 1980’s they had the idea that jumping on all weather surfaces would be better during the winter but as it turned out, it was a terrible. Horses kept finishing lame, jumps racing was cancelled and that gave way to flat racing.

All Weather racing had a very poor reputation at the start. Owners and Trainers took the view that it was only for poor quality horses. It took more than ten years to change that view.

However, it would be fair to say that a lot of punters still take a dim view of all weather racing. Even with the invention of the All Weather Championships. You get top quality horses racing at the six tracks now.

Polytrack is the most popular choice of surfaces for all weather tracks in the UK. Most trainers prefer Polytrack over everything else because it is the fairest surface for horses to race on. It’s a fast surface, with little jar and basically no kickback. Horses can enjoy their racing and because it quickly regains it’s shape after being racing on that means there’s less stress on tendons.

Tapeta is very similar to Polytrack. There’s almost no kickback and they say that it’s more versatile than Polytrack. It’s a very fair surface to race, and would be quite similar to Good on a turf track – as similar as all weather could be anyway!

A while ago Wolverhampton changed their course from Polytrack to Tapeta and now Newcastle has it too.

Then we have Fibresand at Southwell. It’s completely different to Polytrack and Tapeta and Southwell is the only course to use it. It’s much slower than the other two surfaces, and it’s a lot harder work for the horses. If Polytrack was similar to Good ground on turf, then Fibresand would be very similar to Soft. That would be the best way to understand the differences.

Unlike Polytrack and Tapeta, Fibresand produces a lot of kickback which some horses hate. Of course, you will have horses who love Southwell; but the majority of horses would prefer to race on the two other surfaces.

Lingfield is the most prestigious all weather track in the UK. It hosts the All Weather Championships each year on Good Friday. The surface at Lingfield is Polytrack and it usually favours speedy horses. You generally get very fast finishes at Lingfield around a tight track. Generally we get fast finishes because it is believed that you can’t win from the front at Lingfield; so that leads to them starting slow and finishing fast! The track is slightly downhill too which adds to the speed the horses can generate – it is the fastest all weather track in the UK.

Southwell is the only track that uses Fibresand in the UK. Fibresand is the slowest all weather surface so you tend to get very testing races. You need plenty of stamina to win up the long Southwell straight. The course favours front runners because of the kickback and the slow nature of the surface. Fibresand is quite deep and from time to time the work on the track can throw up some incredible track bias. It’s generally viewed that the middle of the track is the best place to race, but this can quickly change on a certain day! You need tough horses to win at Southwell, and they need to race towards the front too.

Wolverhampton racecourse actually started with Firbesand, but then went on to use Polytrack in 2004 but after that they changed to Tapeta in 2014. As we explained above, Tapeta is very similar to Polytrack and with Wolverhampton being such a tight track – it suits speedy horses but because the straight is so short you need to race towards the front to hold a good position. Wolverhampton was actually the first to stage racing under lights in the UK, and it is generally accepted that they view racing as quantity rather than quality!

Kempton replaced it’s flat track with a Polytrack in 2006, and has staged all weather racing year round since. They managed to keep their high-quality flat races so you see a lot of top quality horses race on the all weather at Kempton. Aside from the All Weather Championships at Lingfield, Kempton is the best all weather track is terms of quality horses racing on it. It’s a very flat oval track but it has two very different finishes. The inner course really favours speed and being towards the front for a good position, while the outer course has almost three furlong of a finishing straight so horses can really get into a stride and finish strongly.

Chelmsford City was originally opened as Great Leighs in 2008, but they closed very soon after opening and after a six year wait, opened again as Chelmsford City. They use a Polytrack surface on a fairly straightforward oval-shaped course. It’s a very popular course with trainers as they see it as being very fair to their horses; and you could see some very useful horses make their debut here. It is a lot more of a galloping track than Lingfield, Kempton and Wolverhampton with big sweeping bends and it’s generally a very fair place where there isn’t many hard luck stories.

Overall Outlook On All Weather Racing

All Weather racing continues to thrive in the UK. We can only see more all weather courses being added over the next few years. Yes, tracks like Southwell and Wolverhampton may have some low-quality racing but overall with the success of the All Weather Championships and some top quality racing at Lingfield and Newcastle you have to say that all weather racing will only continue to grow.

It might not be to everyone’s tastes, but we will continue to see one or two all weather meetings daily and especially during the winter months. In terms of trading, sometimes you can get burnt out with so much racing – but isn’t it good to have a choice? You don’t have to trade every meeting; but having the option of all weather racing all year round is always nice to have.