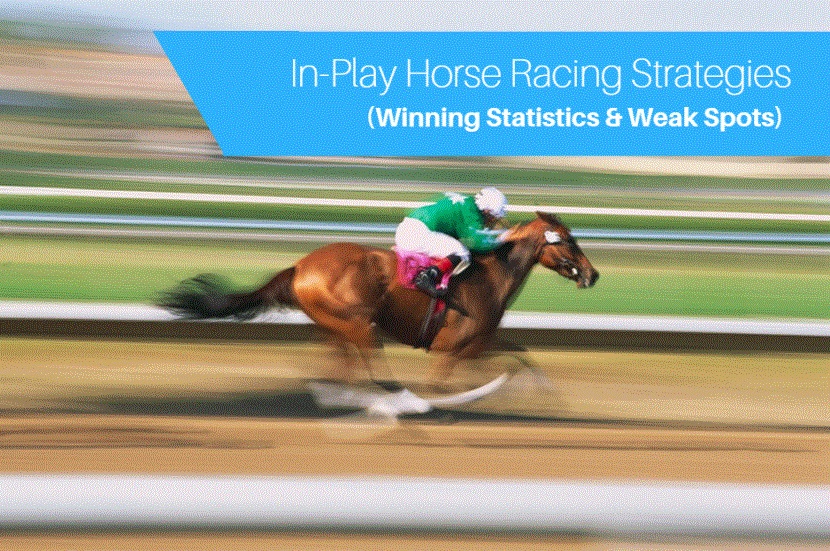 Winning in-play horse racing strategies aren’t always easy to find. But they do exist! your luck’s in, this post id for you…

Although I spend most of my time trading the horses, pre-race. I’m going to share some in-play knowledge with you. In-play racing strategies aren’t usually so appealing to the risk averse, mainly because of the roller-coaster results it can bring.

If you’re just starting out, this could be a little much for you though. This little book is more helpful to complete novices.

It’s a fair question. Simplicity is the first attribute that comes to mind.

No matter what you’re trading, be it tennis, horse racing or football. Simplicity and clear thinking is the start of any good strategy. When building an in-play horse racing strategy it’s even more important.

Why? Because the markets are wild!

Just look at this chart for example… 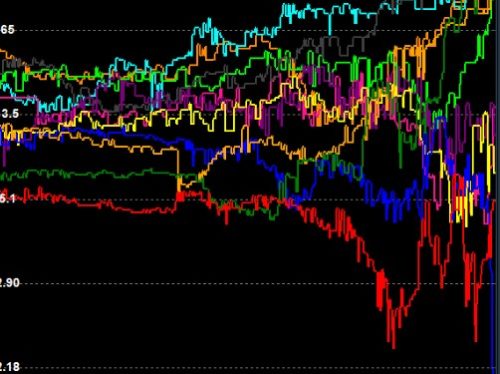 If you wasn’t thinking clearly, or didn’t have a clear strategy I think it’s fair to say; it’d be a bit of a gamble. I don’t like gambling, or taking a risk personally.

If you’re trading in-play manually it’s important to have a strategy, be patient and possess the ability to stick to it! I can see it already, some of you reading this are like “that’s obvious”… and it is, but you’re still not doing it.

The best in-play horse racing strategies are dependant upon a weak-spots in the market. Just like pre-race trading. Which weak-spot that is becomes a whole new ball-game though, is it through visual signs (live video), time delays, market psychology, data, or are you going to be one of those people who just offer terrible value and wait for some poor sod in a panic to match your bet?

More about that in a moment…

Pro’s and Con’s of Trading In-Play

I guess it depends on your personality and what you’re most interested in. But for me pre-race trading is a little more appealing, it always has been. Don’t let that deter you though, particularly if you’re good at holding your nerve when staring at a loss.

In-play trading on the horses is frantic, and depending on the market, most are not that liquid. In-play traders tell me it’s not as good as it used to be either… I think a lot of in-play traders gave up when the premium charge was cranked up. Why take so much risk when you have to give a huge chunk away? unless you’re track-side of course. Lower liquidity always means a bit more risk, trying to exit is harder when there’s less on offer to match. Smaller stakes though, it’s still quite workable.

On the flip side, lower liquidity and frantic market movements mean you can trade with a smaller bank quite easily. It might be easier to burn your stake in-play but making a large profit-stake ratio is quite possible too.

I’m certain the best in-play horse racing trading strategies operate around backing at bigger numbers or laying at very low ones. It’s a lower risk – higher reward game. For manual traders the hard bit is not getting ‘sucked in’ to the action when they can’t get a bet matched or have made a mistake.

Overall, for me at least, the opportunity presented offers a stressful days trading… something I’m not into. I’d rather take a steady profit race-on-race every time.

In-play horse racing trading strategies are no different to any other. You need an edge.

Not familiar with what an edge is? It’s a weak-spot, a vulnerable point within the market that offers more potential upside than down… other wise it’s just a punt.

Bearing in mind that every time something changes drastically there is an opportunity. Or at least, a potential opportunity. It’s the best place to look when you’re starting building up an edge. For example… have you noticed that;

That last point’s a good one, look at this…

See how, as they come around the bend, the market springs into life.

If you had already entered a good position before-hand, chances are you’d be whisked along for a quick profit. It’s a good point to focus on for in-play horse racing strategies.

Also think about those that go to the track and bet at the side of it (ahead of the TV). Do they all start betting at the final bend? Is there an edge to be had involving them?

The ability to assess how well a horse is running within the race is also a real bonus.

And then of course there’s…

Last but not least there’s the hardened-data angle.

It’s not likely to be for everyone as it requires collecting number, processing it and filtering the best opportunities. More for the tech-nerds and automaters, although there are a few worth following. I re-post some of the data used by others on twitter here.

Understandably the data is just a representation of previous behaviour although it’s sometimes surprising how often the trend continues. The downside to this is it’s not just about the selection under analysis, there are often many others in the race that will affect the horses price in-play,

It’s not for everyone but keep an eye out as I share those that appear useful regularly.

The reason for this comes down to timing and the volatile nature of in-play betting. Highly sporadic betting markets mean you have very little time to react. Worse still, if you step out of line and make a mistake – there’s a good chance you won’t correct it easily.

Just think back to the video example above; if you was on the wrong side of a price as those horses hit that final bend it wouldn’t have mattered how good you are at betting in-running.

Maximum opportunity has to be in minimal selection, getting it right, and sitting on your hands in-between. Anything outside of this an you’re likely to just be betting in-running on the horse racing – and there’s no advantage in that.

For the tech savvy, and those with a significant time delay there’s no dispute though: in running horse racing betting is lucrative.

On this point I guess I’m trying to highlight one issue. There is a big difference between trading in-running and betting in-running on the horses. I feel the need to say this because of the amount of emails and messages we get each week. There is a definite trend forming where some punters think they are trading, just because they ‘cash-out’ their position.

There’s a bigger difference than that. In-play traders typically exploit a bias within the market, as mentioned earlier in the post. Knowing the difference will be a great benefit to any-reader…

In-play trading is an acquired taste. It’s got its own specific positives as well as it’s downfalls, those who have a strong understanding of the sport and an eye for a well travelling horse are more likely to do well. In-play isn’t for the faint hearted, the erratic movements and surprise upsets can really hurt if caught wrong.

That’s not to say it’s impossible though. I suspect the majority of good quality trading strategies for in-play horse racing centre around people who have a time advantage, or a pack of little bots chipping away on small stakes. In fact, I used to know someone that did this very successfully.

As they told me; when cross matching was introduced most of their profit went with it…

For me I’ll stick to the pre-race stuff as it’s my ‘safe place’.

Hopefully this post offered a little insight into how you can improve your approach! Please share it about…