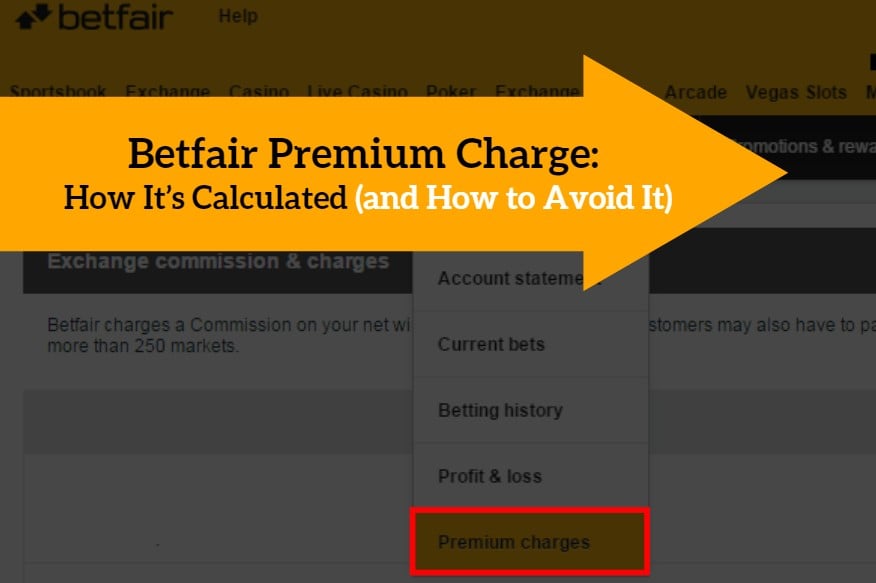 The reality is, you probably don’t qualify for Betfair premium charge yet…

Plenty make the lower threshold (20%). But don’t let it stop you, it’s only a small obstacle. 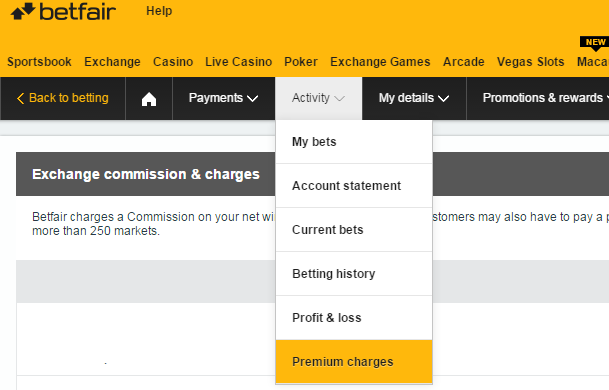 Once you do qualify to pay the premium charge, an extra tab will appear under your account section (like the image above).

Now I’ll explain how they are calculated in the simplest format I know. Despite Betfairs explanations, many still don’t seem to get it…

Betfair Premium Charges – How Do You Qualify?

Once you meet the qualifying criteria below, you become eligible to pay Betfair premium charges:

From this point you then have a Betfair Premium Charge ‘allowance’ which equates to £1,000 worth of premium charges. Until recently, this was displayed on your premium charge statement before you began to pay.

If you’re not sure about how much commission you’ve generated, markets bet on or how profitable your account is (lifetime) don’t worry, you’re not profitable yet…

Just getting started? Get everything you need compacted into one little book

Once you meet the 3 criteria above, you will receive a delightful email informing you that your account now qualifies, congratulations! (you always used to get an email anyway, not sure if they still do it).

You will also see the tab shown in the image at the top of this post appear within your account section of the website. This is the link to your ‘Premium Portal’. All the information from the qualifying points listed above will be shown, along with the weeks commission, profit and expected Betfair Premium Charge due.

Betfair’s Premium Charge Calculation is slightly confusing; but I’m going to break it down simply for you.

If Premium Charge confuses you then don’t worry; I think they make that part of their strategy so the average punter just doesn’t get it.

The upper % levels kick in at £250,000 net profit. The same calculation applies, but with the additional rates.

At the bottom of your Premium Charge statement you will see the current state of your ‘allowance’ starting at £1,000. Counting down to 0 each week you qualify for a payment. From 0 onward, you pay every Wednesday at around lunchtime-ish.

One thing to note: when you start paying it, make sure there’s enough in your account. I’ve heard horror stories of those trading on the afternoon have opened a trade for the liability of their account and then found they can’t close out because the payment has been taken while the trade was open. I’m not sure if there is anything in place to stop that happening now as it happened to someone I spoke to some time ago.

Premium Charge Exclusions: Single wins accounting for 50% or more of gross profits are excluded from the weeks calculation. In trading that’s extremely unlikely, especially if you’ve been profitable for any period of time.

How Can We Avoid Paying the Betfair Premium Charge?

Reducing your Betfair premium charges; here are a few options…

Disclaimer: I am not telling anyone to do the above in point 3. I’m just aware that this has gone on in the past, and by multiple Betfair users. Betfair has its own Premium Charge avoidance measures and have frozen accounts, although with the highest premium charge at 60% I’m not all that surprised some have resorted to this.

If you’re serious about trading the exchanges, reducing any expense should be high on the priority list. Much like TAX in the outside world, it’s a big deal. Finding ways to reduce premium charge payments early is logical. In reality; later on in your trading career, as you profit more, avoiding the charge totally is going to be hard. Save what you can, while you can (arbing is the choice call – before you qualify for the PC).

Yep, you read that right…

Back in 2011 Betfair premium charge team reportedly removed £52,000 from one customers account for ‘premium charge avoidance’. The harshest point being they seem to be able to act as judge, jury and executioner all in one foul swoop. There’s a full article here courtesy of the telegraph should you want to read it (it’s fairly long).

I couldn’t see any other articles online at the time of writing so would assume he didn’t get it back. A scary prospect for most.

So imagine the day you’ve qualified – how do you deal with it mentally?

Even though you know it’s going to hit you when profitable; getting a PC bill each week is still very hard to stomach. The most important thing to remember is NOT to change your trading. You’re successful for a reason, do not change it. You may add some of the options mentioned above to lower your PC but you have to remember why you hit PC in the first place; because you’re a good trader. Being a successful trader is a game of very fine margins – when you’ve found success, changing could easily give your edge away.

The standard commission rates on Betfair are slightly simpler than the premium charge. First of all; you only pay commission on winning bets.

The commission rate that you are liable to pay depends on your resident country, and the amount of money you bet.

This makes it hard to give you an exact figure here and now. Typically, the base rate within the UK and Ireland is 5%.

The standard Betfair commission rate is calculated like this:

So as an example:

This would obviously mean our example user is on 3%. Easy enough right?

To be honest, you can’t change it so there’s not a lot of point in worrying about it. Plus, even if your generated commission is lower, the premium charge compensates for it.

Is Premium Charge Fair and Legal?

There’s no other way to explanation; Betfair brought in Premium Charge to make more money. If you’re a courtsider, or run automation (and always win). You should have to pay extra, because you are taking liquidity away for others with little to no risk. I feel that’s an honest view on PC.

However it’s very unfortunate that decent hard working traders get hit with Premium Charge too. After taking risk and working so hard to get profitable, it can be frustrating. But let’s be honest… it’s like a badge of honour that very few get to wear!

Little can be done, except producing profit more! Or rolling the dice with extra accounts…

By adding the upper levels of Premium Charge Betfair have created a deter-ant to new traders. Learning to trade can be tricky at the best of times, the last thing you want to hear if 40-60% could be swiped from you when you reach the upper levels of success.

But remember… that’s exactly what it is. The upper levels.

As gambling in the UK is tax free 20% isn’t too much of a problem. Betfair premium charge above 40% certainly is though. If you’re new to the game it’s best to start off small, use other exchanges like Betdaq and consider counter-measures like arbing early.