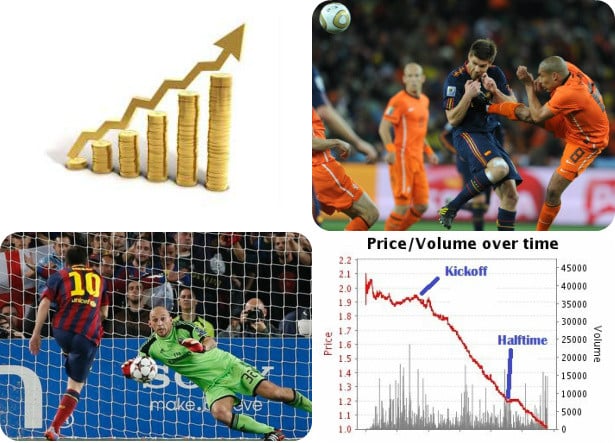 With the football back in full flow, improving your football trading strategies is important. At least, if you want to win anyway…

…Everyone knows that sinking feeling, when you’ve just opened a trade and the market goes ‘suspended‘ only to find out the other team just scored.

Don’t worry we’ve all been there at one point or another! You just need a better strategy.

Here’s a few football trading strategies to get you thinking. Using them in the right situations is the key to profiting…

Football trading strategies are often very simple (the best ones). To get the highest level of success it’s best to record all trades, and have a clearly laid out plan.

Keeping to it, as with all trading is the harder bit! It’s just natural for people to hold on to a bad position, nobody likes losing!

As you’ll have heard me say before; Knowledge dispels fear!

The trouble is, most people who fail at trading the football don’t put enough time into assessing the situation… they don’t have enough knowledge. If you haven’t a clue where to start this post will get you off down the right track.

Doing plenty of homework on each game prior will also massively increase confidence and success in any of the football trading strategies mentioned….

When team sheets and various information is released there is opportunity. Just think about that a second.

That’s also why it’s not always possible to have too many ‘fixed’ football trading strategies. When I say fixed I mean as clear-cut as the same thing every time. Information and situations dictate the market, as they change we will need to change with them.

One thing is for certain though; when there is change there is opportunity. Even those with the best football trading strategies know this!

Sometimes a lack of information can be just as telling as something happening, the clip below should make thing a bit clearer.

Be sure to watch it to the end, its only a couple of minutes…

The natural progression of price during a football match looks something like this;

It’s often best to employ different football trading strategies at different points. For example you can see the price didn’t move at half time that much, but significant volume was still matched.

Obviously this graph is for a game where no goals were scored. The price will bounce around depending on what’s happening on the pitch. End to end play and missed shot’s are often represented by those little spikes that don’t confirm to the overall trend, but as with all football trading strategies it’s hard to predict every movement.

Taking a longer-term view can be helpful for this reason. Much like tennis trading, unbiased knowledge of the sport is a big advantage.

By having a good feel on how the game is going, this strategy can be effective. I should mention though, its best to be select with its application! If the pace of place suddenly changes it could be a good time to scale some of your position out at the very least.

We’ve all seen those games where the winning team just needs to hold on for another 30 minutes to obtain the points and result they need. Playing into the corners and taking their time with the ball isn’t uncommon.

These situations are where this approach is most useful. If you can find a game where its likely to be the case and the odds favour you (laying lower prices, backing higher prices) then it’s a double bonus. The last 30 minutes of any game can get a little more frantic, in the market and on pitch. Waiting for the right opportunity and knowing your teams means this can be a pretty safe play at times….

On the Geeks Toy forums some time ago a guy called Wazoo posted this thread. It’s worth a read when you have time (quite a long thread), you’ll see a lot of his trading was in the second half…

It’s impossible to say for sure, although it’s likely this could have been one or all of the football trading strategies used.

After suspension in any match the market goes haywire. Traders in a bad position exit, others scramble to open a good one.

There are many different reasons for this, although one of which is a stand out opportunity for me.

If you look at the three graphs below it’s not hard to see when the goal went in. Looking at the second graph in the centre I’ve added a couple of pointers.

After a goal the price dropped from 3.0 to 1.58. The graph doesn’t do the position justice as the price settled at 1.62. Looking at the graph it looks as though the price didn’t trade below 1.62 (mainly because of the volume matched after at them prices) although it did, and for a good minute or so (straight after goal).

Anyway, it’s not hard to see this produced a natural compression point in the market! One of those lovely points where, you can find an over-reaction.

More importantly, you get to open a trade with far more potential upside than down. Laying below 2.0 is always a good idea anyhow, but opening a lay bet at 1.58 or even 1.62 would give you the position to have a trade open for a whopping 17 minutes without the market moving all that much against you! Worst case, you would have to exit at 1.52 losing 6 ticks in the process.

On the flip side, if there was a counter-goal as there often is in football the price would have been back at 3.0 in no time at all (+100 ticks)

Make’s sense, right? This is what makes this method one of my favourite football trading strategies.

Obviously there is the risk of the current team that scored scoring again. After conceding a goal, most teams are on edge enough to stop the follow-up. Knowing your football and the situation that’s likely to unfold is an advantage. It’s a simple strategy but can be very effective.

It’s also a good idea to think about which team scored here. If the goal was scored by the team considered to be the outsiders, there’s every chance the price will hold that bit longer. If the favourites scored it was that bit more expected and so the situation is a little different. If the favourites scored first though, the price will be far lower, offering less financial liability for the risk of opening the trade.

Strike rate with this method is considerably lower than other football trading strategies, although in terms of risk v’s rewards it’s one of the best I know!

Laying the draw is probably the oldest, and one of the most known Betfair football trading strategies. Many are already aware, but for those who are not I shall explain…

By laying the draw you are basically looking to open a position with the view of a goal being scored at some point. Once a goal is scored you trade out for a profit, or at least offset your position to reduce risk, leaving an increased payout on what you think will happen.

Seeing you rarely see a football game without a goal, it’s one of the most used football trading strategies around. There is a risk of over-trading though, so be select and consult statistics on previous performances where possible.

As with any trading strategy, the aim of the game is just to win more often than you lose! Not just trade every game.

There are two main things to bear in mind when laying the draw. The price at which you open a position, and the likelihood of a goal.

Checking the game in question for historical statistics is a good idea. Also checking the line-up for the game. If you have identified a match as a good opportunity for this strategy and they aren’t starting with their star striker, it’s probably best to hold off as long as you can (or until they come on) and get a better entry price.

Many games are still 0 – 0 at half time. This is the ideal time to open a position as there is extra value in the draw price to lay, it’ll have already shortened somewhat. It’s quite likely the teams will be feeling the pressure to score that bit more as well. Depending on the situation.

Some teams are also known for being a bit more ‘lifeless’ in the first half. And turning up the heat in the second.

As with any of the football trading strategies, careful selection is important. No two matches are identical. Many play this strategy a few times, see it works and then proceed to do it on every game in sight. It doesn’t take a rocket scientist to work out that’s the way to the poor house.

Trading football markets on Betfair is a little different to Horse Racing. In my experience its far easier to just aim for one edge in a match. Unlike the Horse Racing markets where you can place many more trades and act intuitively.

Keeping a spreadsheet to record trades and games is also a good place to start! It will help eradicate unnecessary trades. Think long-term. All football trading strategies will work better in specific types of situation. Some more than others. But if you have one strategy you can apply successfully on a regular basis the balance soon grows. The more regular profits are, the quicker it’ll happen.

Quality over quantity as they say!

It’s also important to make sure you’re trading something you actually have an interest in. I prefer trading the horses pre-race, it’s a sport I prefer to watch. And the markets feel that bit easier to profit from. However, football markets turn over huge sums of cash on a daily basis. Hundreds of thousands.

Having just one or two good trades a week can prove a lucrative, with the markets being so much larger it means stakes can be too! If you want proof of that you may want to check out this post, Paulo Rebelo’s stakes in the football markets are mind-blowing.

So as a quick recap, 3 tips for all the football trading strategies mentioned in this post:

Never stop learning! The more Football trading strategies you have at your disposal the more profits you can make. There will be occasions where the opportunity changes and the strategy you was about to use will no longer be of use. These kind of situations can be frustrating to say the least, but if you have more ‘strings to your bow’ as we say here in the UK then other opportunities appear in the moment as previous ones cease to be of use.

Trading markets evolve over time which also makes it important to search for new edges as well as those time-less strategies that will always be there!