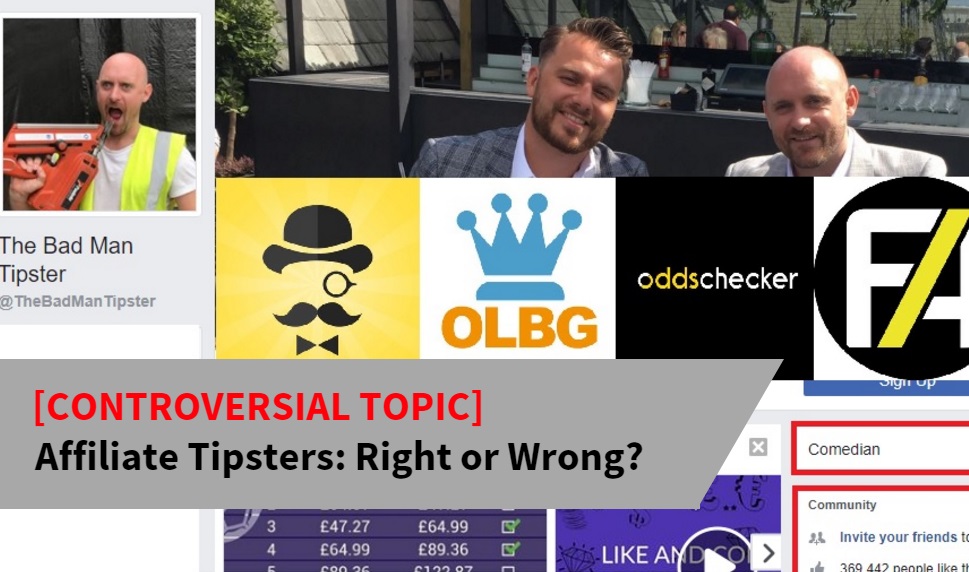 The Guardian recently published this one, which, after reading I thought was really quite unfair.

It’s a hot topic, so why not join the debate? You maybe be surprised by the following, but here are a few points from my perspective:

Usually the Guardian produce relatively reasonable articles in my opinion, although I must say; in relation to betting they haven’t been so much recently.

The article linked above says:

Well, isn’t that a statement and a half. They’ve really revealed something there haven’t they! Like a secret artefact, hidden in the sands of time.

Note: What they did NOT say was;

“Bookmakers consistently provide tips and losing bets to the general public to extort a profit. Every day, since; forever”.

Note: They also did NOT, and never do say;

“Revealed: why bookmakers are a complete ripoff in comparison to betting exchanges (the vast majority of the time)”

No. They certainly wouldn’t ever say that, ever. However, you are presented with this when reading that very same article:

An advertisement to sign up for a bookmaker. Priceless.

What else has happened?

I also noticed earlier in the week (via twitter) that Sky published this: 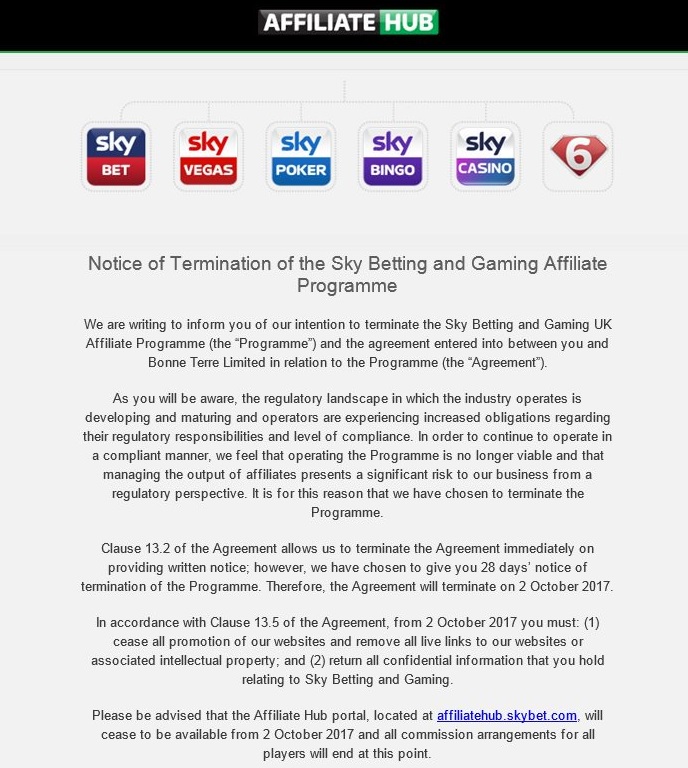 I’m sure the affiliates that signed up new users under a 3 year revenue share agreement are thrilled to pieces with that.

So, facts aside; what do I make of this?…

First and foremost I don’t particularly affiliate tipsters, as I clearly stated in this video years ago.

But I want to point out a few things here; the general industry is a sack of _____.

Following the articles mentioned I published this poll on twitter: 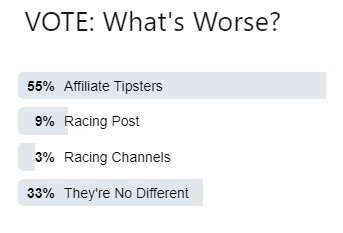 Not quite the angle the Guardian took of course. Or any of the mainstream media sources; why is that I wonder?

I was quite surprised at how many clearly see though it at 33% though.

In the defence of the affiliates that are clearly being targeted by the media; Such as @FootyAccums (they blocked me by the way, I have no idea why) or @AndyRobsonTips. What is the difference between them and the likes of the Racing Post or Racing UK? None of them want the punters to win, if that happens, they don’t get paid.

Since the controversy it seems the Racing Post aren’t doing it so much on twitter, but a quick look at their feed shows very similar behaviour to the aforementioned: 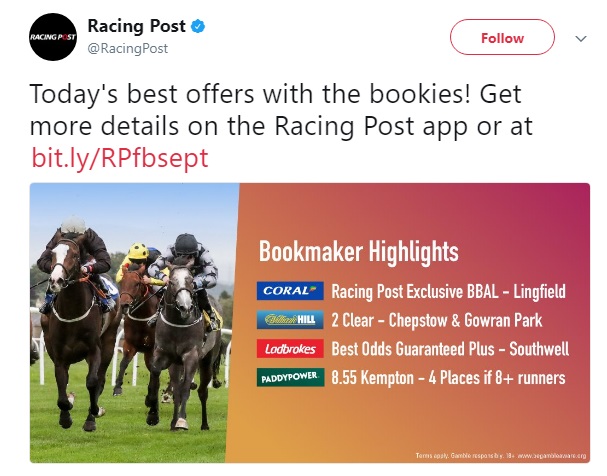 Definitely not got the punters best interests at heart. I’ve mentioned it before, but having emailed in to one of the racing channels about exchanges, I got a polite but kurt response from the producer saying that they would not discuss the exchanges. And a similar experience over a pint when talking to a RUK representative after a Sir Bobby Moore charity dinner.

Also; what about OddsChecker and OLBG? (OLBG are another that claims they are there to “beat the bookie” except they censor exchange trading talk on thier forums).

Why do they always get off so lightly?

To me it seems clear; just about all of the large news streams are in the bookmakers pocket one way or another.

A handful of them just provided a good excuse for Sky to save a monster expense fast too! Obviously Sky are doing it out of responsibility, and nothing to do with saving a fortune, Hence the reason they haven’t done it until this all got stirred up!

The best is yet to come though…

It’s not all doom and gloom though, most of us have a sense of humour. The following, is one hell of a joke…

What have the Guardian, OddsChecker, Racing UK and Dapper Laughs all got in common?

That’s right. Their Baaaaad Men! Look at this Facebook page: 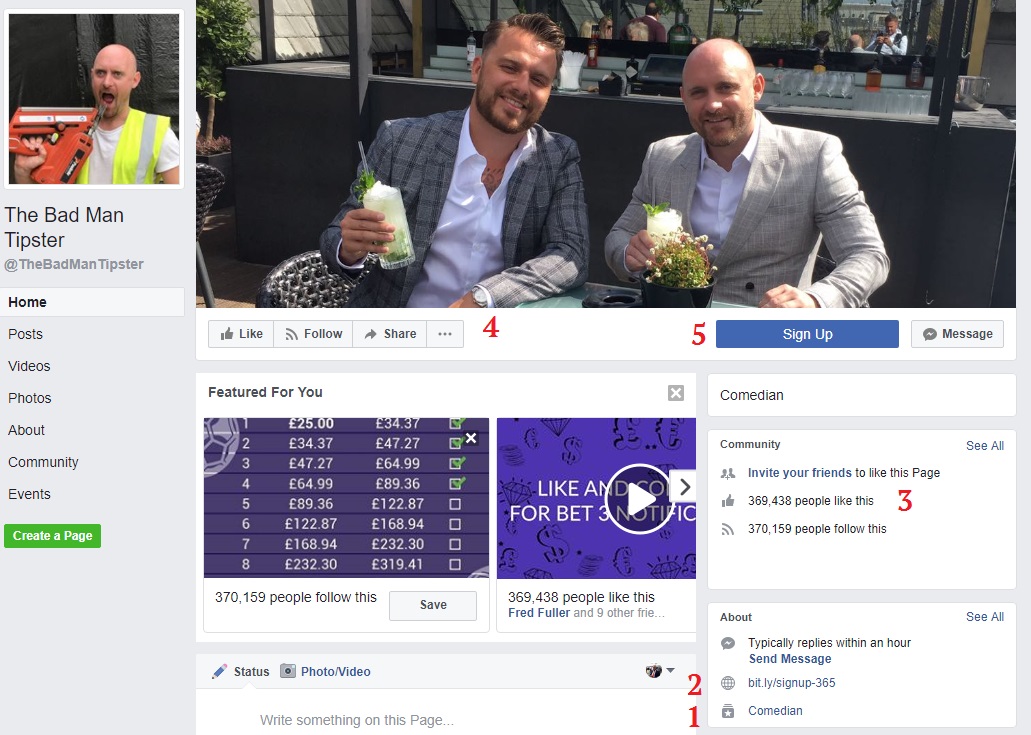 Maybe I’m being harsh. But at what point does all this become wrong or right? And who is responsible? Why does the gambling commission do so little?

The last of those 3 questions puzzles me on a regular basis. It’s like all the free bet stuff; is it not deliberately deceptive? (much like the guardian digs out). Why don’t they intervene? Surely as soon as you have to do something for it, it’s not free?! (like 20x rollover) But that’s another topic.

By the way – the bad man tipster page: I couldn’t find one joke.

Join the debate below…