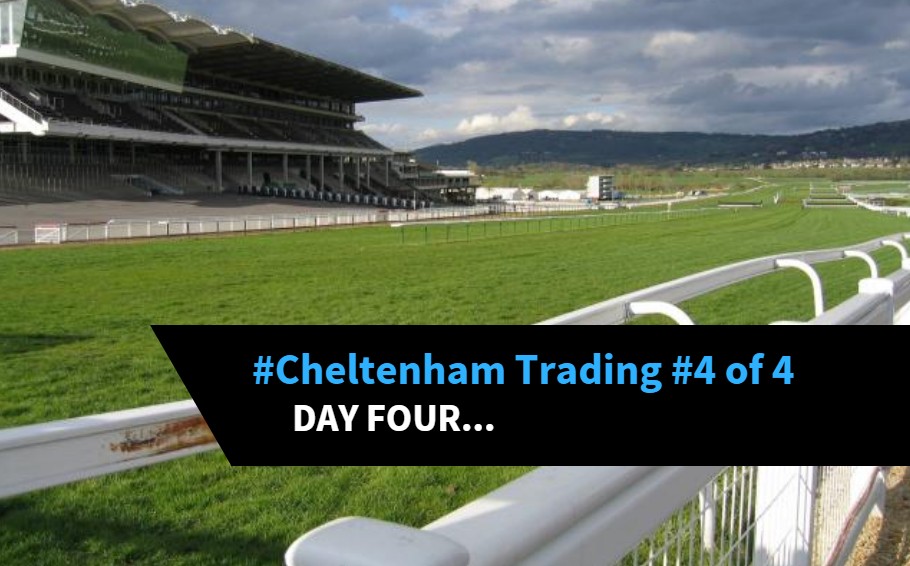 …and it’s all over. What a finish to another crazy Cheltenham week!

Whilst I’m not a huge ‘racing fan’ the Cheltenham festival always provides an epic atmosphere. The final day was no different this year, both in and out of the markets…

The day got off to a cracker with Stormy Ireland in the 1.30pm race. If you’ve got me on twitter, you may have seen this mention at 1.22pm…

Shortly after, it became quite apparent it was a ‘lively’ one in the market. Trading at a pre-race low of 5.7.

As the day progressed the markets settled down as expected. In-between ‘filler’ markets were thin on the ground and it appeared as though a few got stung in process. Not unusual though, as I mentioned in this YouTube clip earlier in the week.

The festival races themselves were best around post time for me. Particularly when they dipped past the scheduled timings. Having less unmatched sat around while Joe Public continued to feed the available prices was nice. In these kind of situations it can become very tempting to ramp up the stakes as orders get simultaneously swallowed either side of the book. To stop trading early on the festival races would just be insanity to my mind..

For a lot of readers I’ve no doubt Cheltenham was a jaw-dropping experience. A mixture of frustration in betting ques and scary stakes hitting the market… unfortunately the opportunity to ‘practice’ on these type of meetings only comes around a handful of times each year. Getting as much value as you can from them is important, both in terms of profit and learning.

Next year will no doubt be very similar. Hopefully by then some of the smaller exchanges will have grown, the additional charges, rising unmatched cash and emphasis on the Betfair Sportsbook is sad to see through trading eyes. Maybe a little competition between the various providers will bring a little extra for the customer 😉

Right, now for the most important part of Cheltenham… the after-party! #BeerTime.