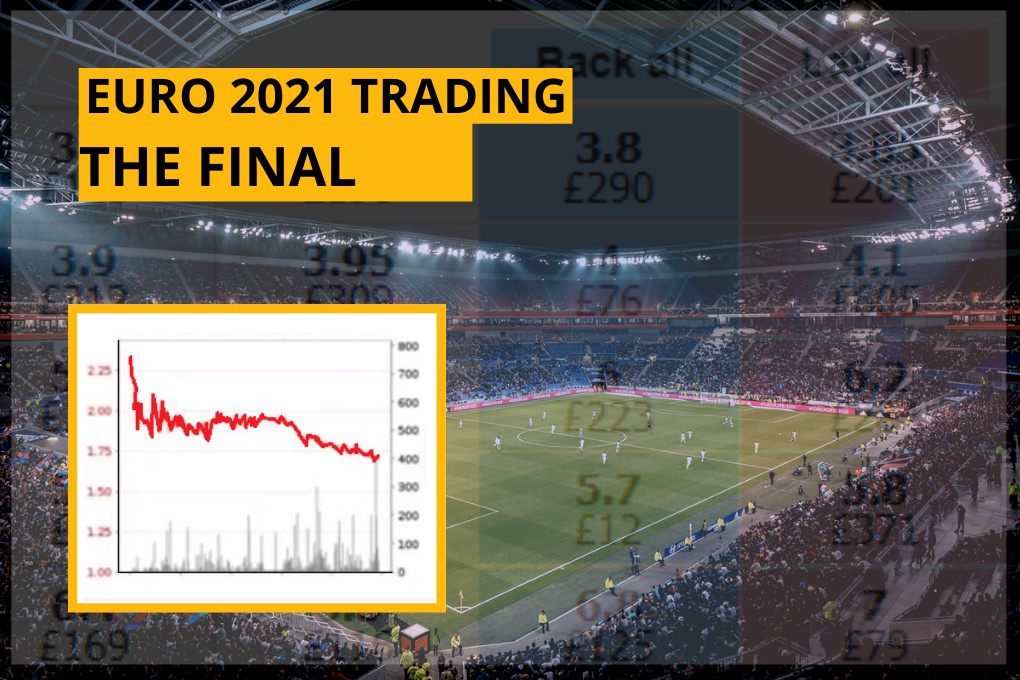 What a blinding month for football traders, with a fairytale ending too… perfect.

But what about the game from a trading point of view? It’s easy to just hope England win, but there are some non-patriotic trading angles to look at too.

I’ve found as we have got deeper into the tournament, there have been fewer opportunities on offer. The semi-finals were a good example…

A natural place to start here is pre-off trading. The England price drifted a little before Denmark, but then it was pretty static at 1.8. There is far less opportunity for scalping with the big blocks of money put up. At the moment, you can see this in the market…

Small traders just can’t compete with money like that, it takes an age to get matched. Whoever it is must have some faith in 3.1/3.15 being the correct line…

There is a less interest around pre-off trading here. The team news should be well known too, overall I feel there is a very little edge here compared to your average week. However, let’s see what happens. You never know if a big syndicate wants to lump on or a well-known virus makes a last-minute appearance. I highly doubt it though.

The next thing to look at is a possible slow start. This game screams a slow and cagey start to be honest. Under 2.5 goals is going to start very short at around 1.55. There’s a little less downward pressure compared to say the England v Germany game when we started at 1.8. Italy changed their tactics against Spain compared to earlier in the tournament, and England isn’t going to attack too early.

With under 2.5 goals already a little short, it might pay to target the draw trade rather than under. If play is very cagey and there aren’t many chances, you might get brave with some accelerated time decay on under 1.5 goals. Don’t get too brave though, I’d want to be out of the trade well before HT, and as I say, I doubt there’s going to be much margin in this.

You can see England are keeping the games very tight looking at their xG figures:

And then look at Italy’s:

That Spain game was a big drop-off, but then Spain are a top-class side. You can see England have grown into the tournament. They are getting more confident. I’m quietly confident they win. Home advantage is a huge positive in this situation. However, I’m not really that interested in backing them to win. I’m going to focus on the draw price to start with, and then look at stalling points if England starts to build pressure.

A key thing to remember about Italy too, and you saw this in the Spain game, is they can handle the pressure quite well. The classic Italian time-wasting tricks. The in saying is shithousery, they are brilliant at it. This can easily produce some accelerated time decay in the last 15/20 minutes.

I also feel although I said this in both semi-finals, the same in-play thinking applies here as those two games. I’ve taken out the pre-game and lateral thinking trading, but my list would be:

If you’re going into the game with an open mind; could you add anything to that? I don’t think so.

Hopefully, it’s an enjoyable game and most importantly… ENGLAND WIN!

Personally, I won’t be trading it. I’ve had a super-busy month and don’t want to burn out so I’ll be away for a few days with the better-looking half. That said, I certainly won’t be missing the match – will anyone?

Also just a quick reminder, the sale on the Football Video Course ends after the game on Sunday. It’s the first time knocking £50 off the price and I won’t be putting it back on sale for a while so if you’re interested grab the discount this weekend.

Thanks for reading the blog this month and for all the comments. I hope you made a few quid with the advice. Let me know in the comments below if you’d like to see more blogs like this month during the Premier League season with my trading strategy and thoughts.