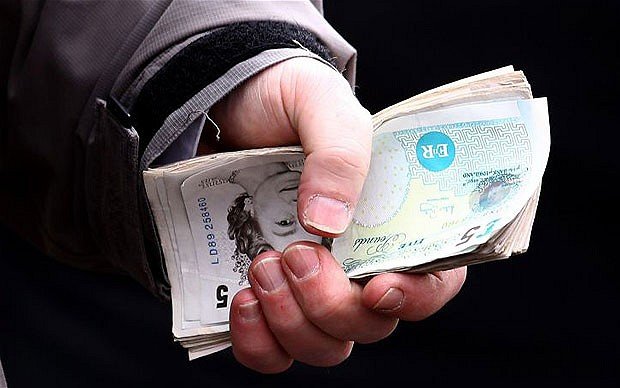 It’s a phrase that’s often thrown about in the betting world, possibly created by bookies themselves.

But if you do… this is what happens!

Make sure you read the whole post, since this happened some real horror stories have been uncovered! 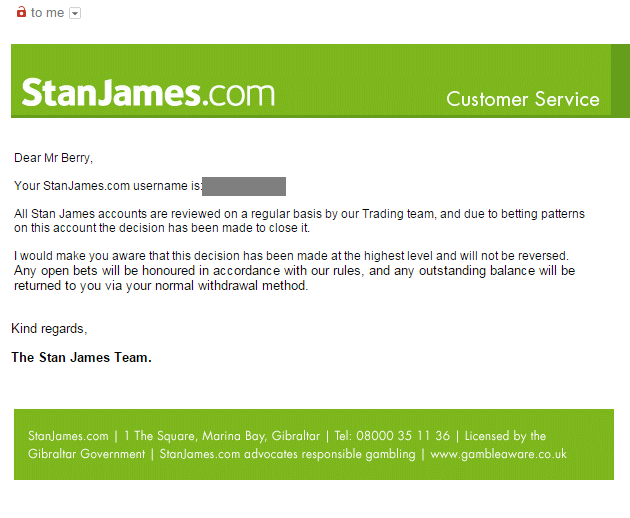 And this is how I managed to ‘beat the bookie’… 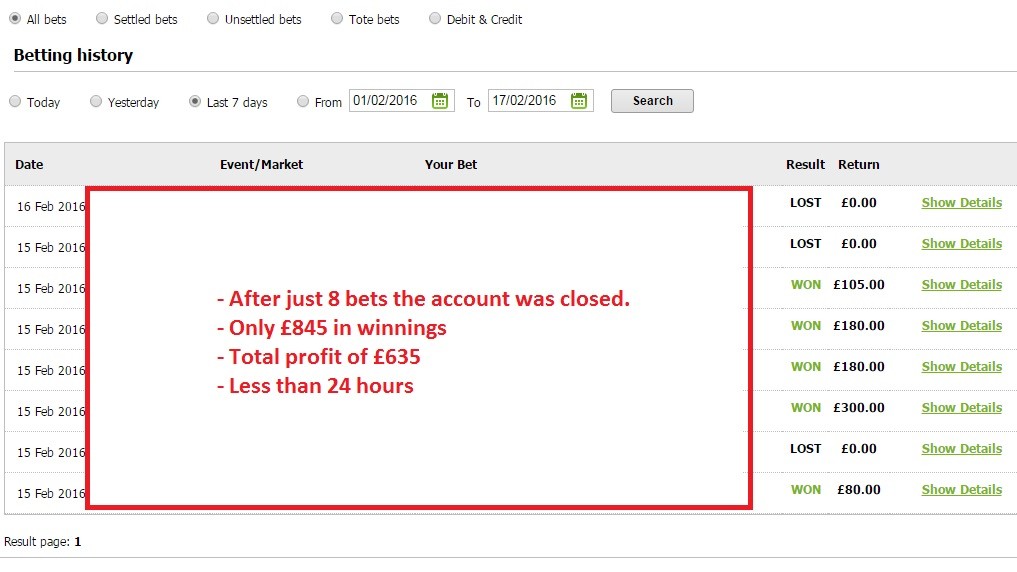 The reason they gave me was: “the traders think you will be unprofitable for the business”

I created a quick YouTube video about the experience, if you haven’t already seen it you can HERE.

Being a trader I’ve never bothered too much with standard bookmakers (excluding before I started to trade). I mean, their ridiculous over-rounds don’t appeal to me. There’s no point betting with a bookmaker at 120% over-round when the exchanges offer something close to 101% at post. Even if they do give you a free bet from time-to-time.

It doesn’t look good at all though, many have commented on twitter which I shall come onto in a second. But bookmakers are now turning into companies that will only ever let you enter a truly horrendous proposition. If by any chance, you should find some value they will cut you off at the knees (premium charge) or close you all-together.

Recently @HBFBritain was set up by the BHA to voice the concerns of the punters. So far, all it seems like is a board of people that are paid by bookmakers to make people feel like they’re heard. Make sure you give them a tweet, I have! (no response as yet, shock).

If you’ve been following a few months you will have seen this video (Biggest Lie In Betting) where I asked Tanya Stevenson what she was on about on Channel 4 Racing… guess what, no answer on that one either! And to make matters worse (this is hilarious) she’s on the HBFBritain board of ‘independent’ advisers! How many bookies are stuffing her accounts with free-bets I wonder?

With all the mergers and customer information being shared it’s only going to get worse….

What followers had to say (some shocking tales)

Someone on Facebook compared the bookies and account closures to going into Tesco’s only to be banned for only buying the bargains – seemed quite a fair comment. Here’s what a few others had to say…

Great point Tom (if you read Tom’s Bio, he’s Ex Betfair). Betfair Made record profits of over £40 Million last year, guess they wouldn’t last long. For clarity: I didn’t suggest they ‘only’ lay winners, just everyone the same. I think Betfair would still do quite well from the amount of Premium Charges they take as well.

A quick google show’s that Unibet (that own StanJames) profit last year was recorded to be £69.7 Million.

Wow! this is terrible. For anyone that didn’t quite get that – the bookie allowed the user an account, they had to roll-over (turn their bets over several times) to qualify for the bonus payouts but then limited the user to maximum bets of a euro?! So, he couldn’t win his lost money back without pacing many bets reducing the chances of winning massively. If that’s striclty true it’s pretty horrendous in my opinion.

‘Licensed theft’ is a little strong, but in all honesty I can’t argue with that. It’s pretty clear; come and give us your money or we will close you down. That’s a lot of bookmakers you’ve had trouble there with too Michael. Fair play to the ones that haven’t closed you yet. 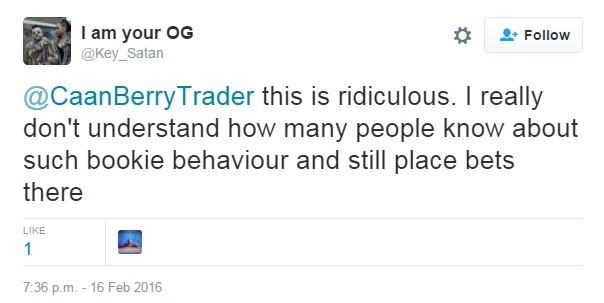 It is quite surprising how many don’t know about this kind of behaviour. I think in years gone by it was okay as they could just tell a punter to get out of the shop and not bet there again. But in 2016 with the rise of social media and the like more should know, by the way – if you agree feel free to tweet and share this post! Racing UK and ATR certainly won’t be sharing such content…

Too many to answer… 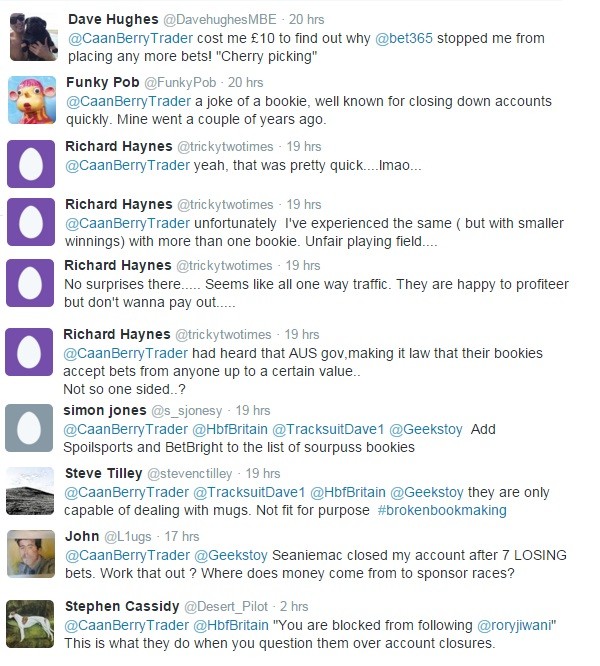 Sorry if I didn’t get around to replying on twitter, there was literally too many to answer!

Moral of the story? There is no ‘beat the bookie’… Exchanges rule!

6 thoughts on “BEAT THE BOOKIE: Account Closed In Just 1 Day!”