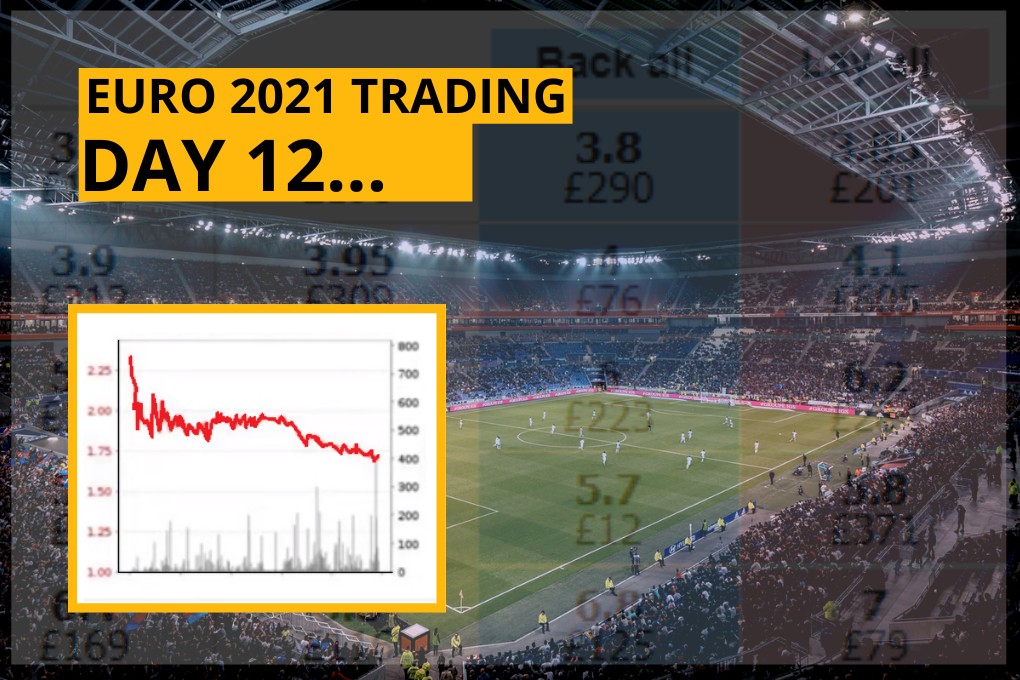 Another massive England game on Tuesday and although the temptation of a few beers is strong, I have to stick around for the trading opportunities tonight.

After the draw with Scotland, group D is wide open and everyone has something to play for. It’s fair to say we could see some carnage on the ladders tonight. Exciting times.

Croatia have been a letdown so far, and Scotland actually has a chance of getting through too. They have a home advantage as well.

Here’s another topic though for tonight… should England win?

The winner of group D faces the runner-up in group F which is one of France, Germany or Portugal. While the runner-up of group D faces the runner-up in group E which could be Spain depending on the Sweden v Poland game. Then, third position opens up a can of worms. Would you gamble and finish second? I think I would, Spain will likely hammer Slovakia and then Sweden could draw with Poland and still be second. Having said that, you then will likely play the winner of group F – if they get through the Last 16! What a draw for England FFS.

Football Guide users can benefit from the lateral thinking strategy here, and in general from now on in the tournament.

Up the Scots… LOL!

They have a lot of work to do, they need to win. But Croatia has been average so far and with home advantage, I wouldn’t rule it out. You know Hampden will be rocking, and they’ll likely work a lot harder than Croatia. You might say Croatia will outclass them, but they haven’t been creating enough chances at the Euros. The Czech Republic performance was pretty poor, Scotland actually played better against the Czechs, even though they lost.

From a trading point of view, both teams need to win. So having a large stake on unders or scalping as the market ticks down is a big no here in my opinion. It’s just common sense. You could target some accelerated time decay in the second half if you feel they just aren’t playing well enough and cancelling each other out, the side ahead are time-wasting etc. But as far as an early unders trade goes – it’s one to avoid. That’s not to say we won’t have a cagey start, because they’ll hardly go all out early.

I like the Croatia lay here. They have been bang average and 2.34 is too short in my opinion. It’s not one to go mad about because Scotland are pretty average too, but I’d definitely have Croatia bigger. They haven’t done enough to justify this price. In terms of side markets, I’m going into this one with an open mind. I strongly believe this is the best strategy when you have a situation where all four teams can go through. This one is going to be about picking your spots to get in and out of the market in the second half. Scotland scored a lot of goals between the 46th and 60th minute in qualifying, that might be the time to target a Croatia lay if it applies at the time!

Being a trader and managing risk, I would aim to draw this game if I were England.

A lot of gamblers do though, so will that have an effect on the price pre-off? I’ll be watching the England price like a hawk here. Technically I feel the 1.61 is too big, England hammered them 5-0 here in qualifying. The Czechs did win when they had home advantage but I really don’t give them much chance. Everyone was moaning about England against Scotland and granted they were disappointing, but they created an xG of 1.67 and considering they weren’t at their best, that was decent. The stats don’t lie as they say.

In terms of trading, definitely don’t want to aim for the early unders trade and early scalping, which we have benefitted from in this tournament. I was never a fan of that strategy with England anyway, the stats don’t back it up. Czech Republic are bang average for me, and I’ll be looking to get on England. Have to be a little careful of course because with trades like that the market is moving away from you, so I’ll be looking for some stalling points etc. Again much like the above game, the best strategy is an open mind going into the second half. Both sides would finish 1st and 2nd with a draw, and perhaps England do gamble with the draw. We could see very accelerated time decay depends on their actions on pitch so be vigilant.