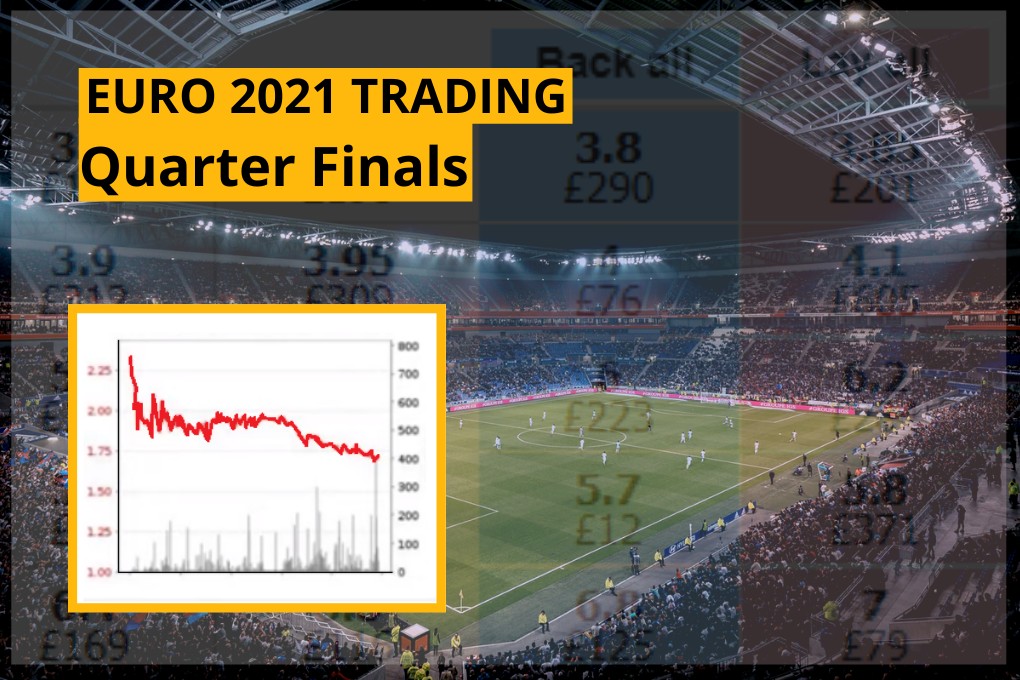 Another big game for England today. Ideal kick off at 8pm too. I’m going to target the 5pm game for trading and then chill out for the England match.

The games yesterday were unreal. Unfortunately, Spain scored too early for me to benefit from their early goal. And what a game between Belgium and Italy. I had that earmarked Belgium v Italy for a slow start and although we had no goal until 31 minutes it was such a good first half it was hard to trade unders given the play on the pitch. Onto today…

Denmark look huge value at 2.18 so I’m going to plan my trading around that. I’m very interested in any pre-match movement here.

My thinking would be Denmark steam in – they look levels above Czech Republic. But Denmark aren’t a “big name or side” so they might not be too fashionable. Looking at the xG figures, I can see them being a big bet for the professionals so keep an eye on the volume pre-off. This game from a pre-off point of view is the most interesting of the Quarter Finals in my view. Balls to the wall, I would say Denmark have to go off shorter than 2.18 but we have seen some odd drifts pre-off at the Euros and there’s been a lot of laying against the favourites. Not only do you need the professional money, you need the average football fan too. Those £200, £300 stakes. I’ll be watching the volume ladders for consistent bets flowing in. Denmark drifted a lot before the Wales game and I thought they were too big at 1.91! They went off odds against and then continued to drift early in the game.

As we go in-play, the unders play is certainly an option here. Czech Republic hasn’t had many chances or goals in their games. They kept the Netherlands quiet in the first half and the Netherlands are a pretty attacking side. Their average goal time in qualifying was 31 minutes and they had some weak teams in their group. Small sample in this tournament but they’ve only had one goal before the 30-minute mark and that was England scoring against them. (England beat them 5-0 in qualifying with home advantage too). Denmark scored very early against Belgium (two minutes) but then that’s been the only goal they’ve seen in their games early. We could easily see a cagey start here. The Czech Republic will be happy to sit in and defend early.

The ideal scenario here would be no early goal and we cash in on the early unders trade, before Denmark grow into the game, keeping the ball and creating stalling points in the market to back them before scoring – perhaps into the second half around the 55/60th-minute mark. That’s the ideal scenario, but let’s see what happens. The stats support an early unders trade and I really see value in the Denmark price. Their xG figures have been very impressive.

Joking aside, surely England win this?

Ukraine look bang average. They were poor in the group stage with only one win coming against North Macedonia. Lost to Austria pretty badly when they only needed a draw. I know they only lost 1-0 but Austria completely dominated the game and then they copped a pretty handy draw against Sweden who gave away a lot of chances in their group. England haven’t conceded a goal yet, I’d expect that to continue and Ukraine (on paper) are very poor going forward.

My angle here is what the England price will do pre-off. The country is buzzing with excitement and I can see that flowing into the markets. I can see a lot of bookmaker hedging and that moving the price in. Again, look for volume. At kick-off, I think there’s a big gulf in class here so I’m not keen on the early unders option like we had against Germany. You know what? The platform is here for England to win 3/4/5-0 and really set the tournament alight. Maybe I’m biased, but Ukraine are there for the taking.

As I said above, I’m chilling out with a beer for this one so I won’t be trading this one in-play. England move pre-off is my target, let’s see if that happens. Then I expect to watch an easy win hopefully!

Here’s a snappy YouTube we made about England’s chances: