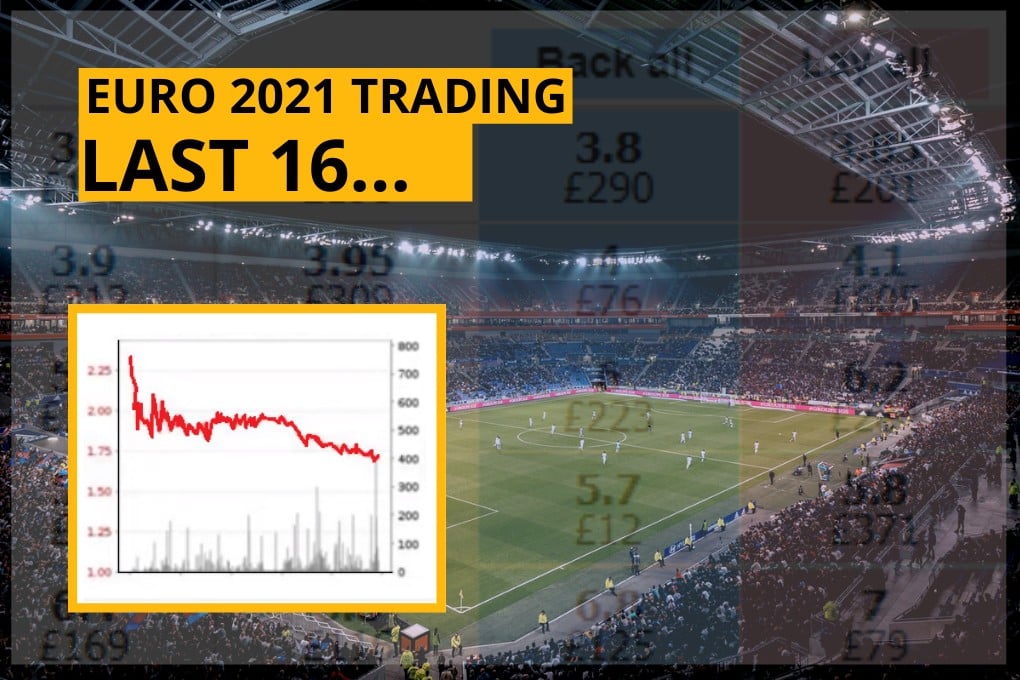 Is today is the day for England fans in Euro 2020? The tournament couldn’t be set up much better…

The draw has worked out well, they have quietly come in on the outright market with Germany in front of them. It’s going to be a cracker to watch.

We’re at the stage of the tournament where Lateral Thinking is a nice edge to have, so I’d highly recommend Football Video Course users to review that section.

Onto the two final Last 16 games:

How crazy was last night by the way? Whatever about one 3-3, but two? I’d say let’s see more of the same, but tonight’s games could easily finish 0-0 on paper.

This is always a huge game, but the way the draw has worked out means the winner has a dream run to the final. I took a look at the “To Reach The Final” market on Betfair before France played and after Italy got through, and England were shorter with Germany just a little bigger. If England wins here, the country can rightly go into overdrive with excitement. Then we’ll probably lose to Sweden on penalties, LOL!

If you need a new account, Betfair is offering a risk-free £20 bet here.

We haven’t had too many positions on the England or Germany games. England’s average goal time is very early, but that reflects the quality of opposition IMO. I’m going to go into this game with the early under 2.5 goals trade in mind, but I’m not married to the plan. Let’s settle in and see how the first five minutes goes and how the sides line up.

I’d expect a slow and cagey start in such a big game, and under 2.5 goals can tick in quickly from 1.8 or thereabouts. England have been solid at the back in fairness. They’ve yet to concede an xG over 1 (0.54, 0.73 and 0.46). Germany plays a more open game, but I reckon they’ll go back to the type of game they had against France rather than Portugal here. Under 2.5 goals doesn’t look like a bad value bet actually, if pre-off betting was your thing. 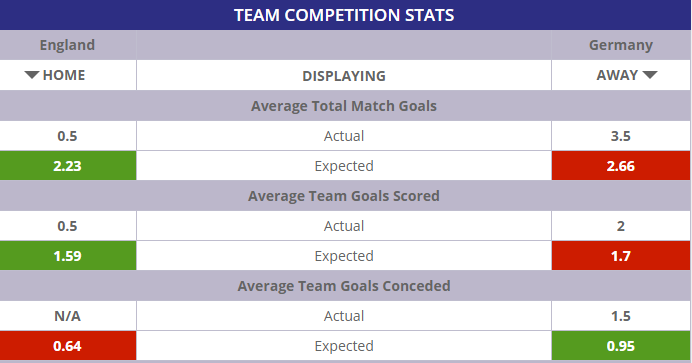 Other than an early unders trade strategy, I’m pretty open to what happens here. I’d be keen to look for an overreaction on a goal or some accelerated time decay in the second half. In my view this isn’t a game to go hunting for goals with your trades, let the market work for you. I could be very wrong, but I really can’t see a crazy open game here that has 4+ goals. Maybe if England score early and Germany have to chase the game, but other than that I’d say neither side will give away too much here. I’m biased but England has a great chance to win too. The speed they have upfront on the counter will be a huge asset here – remember how many chances France had in the second half against Germany.

There’s a chance we could be heading for a few beers after the England game… depending on the result of course! When you take a look at the stats here you see two very poor sides. No wonder England and Germany have steamed in on the Outright market. Apart from their win against Slovakia, who are bang average, Sweden’s performances haven’t been good. They conceded an xG of 2.89 against Spain and Poland missed some huge chances against them. You could argue Poland should have won. I want to be against Ukraine, but Sweden doesn’t fill me with confidence. From a trading point of view, that makes this a very difficult game because I don’t trust either side. And when you’re second-guessing yourself you’re more likely to make mistakes or closeout positions too early.

How many times have you opened a position, doubted yourself and closed, but then opened again… and closed again!

The net result is actually losing a few quid every time and it’s only through self-doubt. Ukraine was bang average in the group stage. They were badly beaten by Austria and lucky Austria only scored once. That’s pretty poor considering both sides only needed a draw there. I’m going to sit on my hands here but I expect Sweden to win as Ukraine are so poor. When I look at this game I just see red flags, and those are the ones to avoid trading…