Matched Betting: Is It Dead? 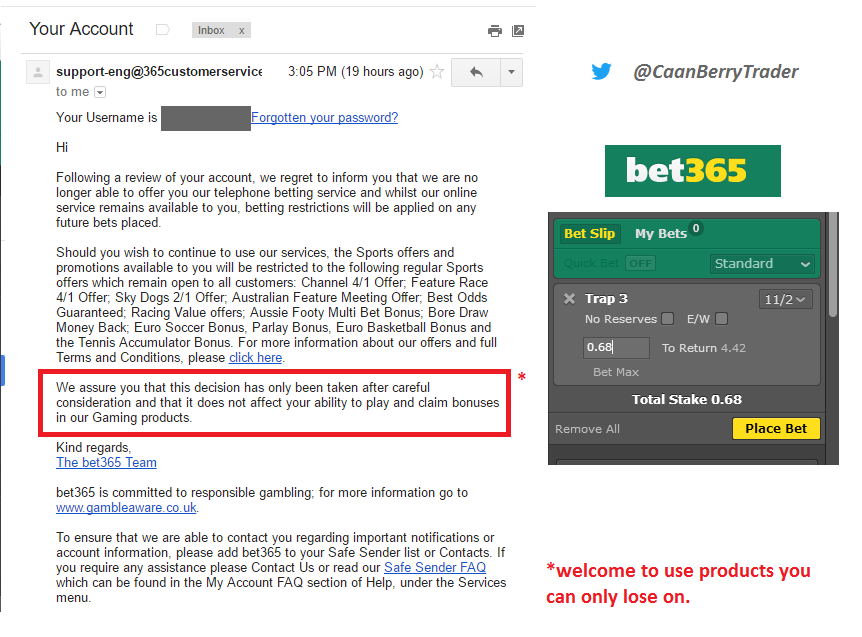 So it’s hardly a new problem; account restrictions, limitations and closures (by bookmakers). Matched betting seems to have highlighted the problem for most.

But it’s getting worse. Accounts are closing faster than ever, you may have seen the Stan James account I had that lasted hours…

But it’s not over yet (especially if you’re willing to go the extra mile). And if you’re a profitable trader there is a real bonus on offer!!

Here’s what I mean….

Matched betting and various other bonus bagging methods has led to the bookies behaving like this. It must be tough for them as they want to keep up with the other bookmakers and their marketing campaigns.

It appears they’re now going too far though. I mean seriously; they offer a book on an event at their prices and then reduce me to 68p bets because I consistently beat them? they offered it!

Worse still you may have read articles about bookmakers sharing information on those matched betting and arbing. Several of you on twitter mentioned this, have you opened an account and been banned or limited before placing a bet? comment below!!

They’re also reported to be using programs like iesnare to monitor activity. If they’ve installed such program on your machine (to make sure you’re not money laundering) they may also be using it to see if you’re logged into Betfair at the same time as their website. Is that really right?

A couple pointed out on twitter that they don’t blame them for not wanting to business with someone who screws them on a daily basis as it must cost them a fortune.

I get that, I really do… but they started all the bonus offering and continue to run an old business model (pre-exchanges). Plus they’re hardly broke – Denise Coates Bet365 founder is a billionaire…

It amazes me how such practices are allowed to go on. Saving the best bit of the email until last…. the real insult;

Why not? Because you can’t win on them…

At this point that may not make sense to you. Dave Stewart asked this question on the Facebook Page…

A completely reasonable question from Dave there and I’m sure he won’t be the only one to ask it. So here’s why…

Trading Betfair’s great… until you hit the Premium Charge, it’s a bit of a kick in the nuts as mentioned before on this blog.

So I and many others have looked for ways to reduce your own Premium Charge… there’s only really 3 possible routes;

Note: you’ll need to know the markets well to find the right opportunities… (especially on scale)

So you probably guessed it by now;

Outside of my trading activity I was placing value bets with Bet365 at valuable prices and covering the loss on Betfair. The end result being win-win, both through an arb (and making a loss on Betfair).

That’s pretty awesome too, as a loss of £8,927.30 on Betfair means it’s still going in my bank, premium charge free!

I wasn’t matched betting! Hopefully you can all see what and why I was doing it now!