So it’s managed to make its way around to April once more, looking at the cards over the last couple of days it prompted me to this post. If you’ve only just started trading Betfair or Betdaq then it could be an interesting month. I’m sitting quietly optimistic as historically April has been one of my favourite months to trade – it just suits my preferred style.

With the change in racing seasons from the jumps to flat the markets change too as you may imagine. New horses emerge, older ones come back from a break and some have had a real change in circumstances, trainers/owners etc. All of these changes make for some exciting propositions to my mind one of which will be seeing new horses throw jockies off at the start for fear of entering the stalls.
When such situations arise the market reacts too, it’s a month to be careful as getting caught on the wrong side of a move can really hurt. Especially if it’s just un-shipped its rider and running around loose. On the other hand, if you’re patient and observant you could be in for a huge return for your stake. As I say, it’s these kind of opportunities I like. 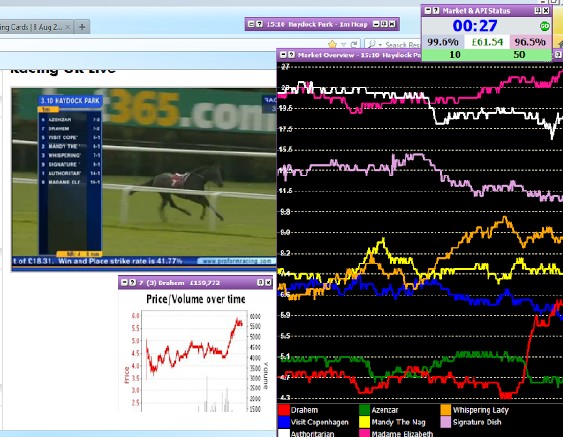 If you haven’t spotted it yet, look at the red line on the market over-view graph. 4.3 into 6.4 in a matter of seconds, thankfully on this occasion I was on the right side of it bagging a cool £60 in the process.

Alternatively being on the wrong side of such circumstances can leave you feeling pretty upset… can’t say I didn’t warn you! (that said im sure I’ll get caught out at one point of another). Another reason to enjoy the markets in April is they are driven that bit more by money flowing into them, purely because of the lack of knowledge on offer successful traders accept the markets are driven more by sentiment than anything else. It’s far harder to believe a horses price is due to ‘bounce back’ if nobody really has much of a clue about anything in the race.

Keeping an open mind and being optimistic when you’re in a winning position is often a good stance to take in April in my opinion, more-so than other months. It’s not long until the National now either! From then on in liquidity is pretty good…. the golden months as it were! Let the good times roll..