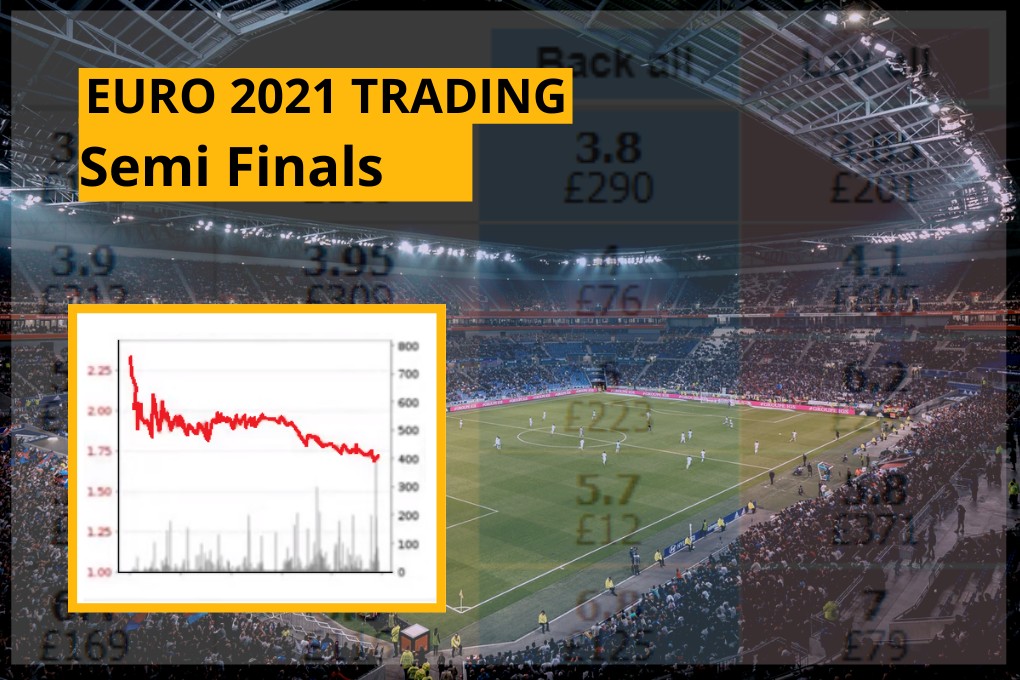 Two cracking semi-finals this week, it’s just a shame time is running out at the tournament. I will miss the 8pm games…

Everyone is going to focus on England v Denmark tomorrow, but Italy v Spain is a top-quality game. There’s several trading angles to explore, so let’s get straight into it.

I haven’t had a huge amount of trading on Italy or Spanish games. We caught a lovely trade on Day 1 with Italy involved, but by and large, the stats haven’t jumped off the page for either side. Spain has looked huge in their last two games and while we benefited from that against Croatia, they scored too early for me against Switzerland. Then, I had an early unders trade planned for Belgium v Italy and although there wasn’t a goal for 30 minutes, that first half was so good you’d have to hide behind the sofa if you were on unders. I’m very interested to see how this game starts. The stats don’t point to a slow start, but you’d assume we will see a cagey start in such a big game.

The question is: to target an early unders trade or not? It could be a little risky.

Italy’s xG figures so far have been:

Pretty consistent. They are creating a lot, and have only conceded twice too. Easy to see why they are the favourites today, but Spain has been on fire upfront.

Those stats are inflated because of extra time, but they are impressive nonetheless. Although Spain is playing some class football, they’ve only won once in 90 minutes. That’s a headache for their backers. For traders though, they traded short against Switzerland then 1.01 against Croatia.

Italy’s average goal time would suggest the early unders trade is definitely an option. It’s 48 minutes. Spain would easily put you off this though, as they have scored early goals, and they create so many chances I’m not comfortable having a large stake on unders. We will have so many games during the season where the stats line-up for both sides; so why risk it here when we only have one side in favour? The only angle for a slow start here is the thinking that it will be cagey because of the occasion, which is true but I don’t fancy it with both sides creating over two goals per game.

I’m also ruling out scalping here. Again, just don’t want a large stake on no goal with these two. However, keep an open mind as the game could turn out to be a very dull affair, so that’s a personal decision then. That leaves us with a couple of trading angles to focus on throughout the game, these are;

There’s lots of strategies from the Football Video Course to choose from in the second half, depending on how things play out. Last 15, Second Half oals and maybe even Correct Score depending on HT.

I’m firmly settled on having an open mind. Just because this is a massive semi-final; doesn’t mean we have to open a trade. My research doesn’t pin-point anything to target here, and we’ll have to react to the market rather than focus on a planned strategy.

On the match odds market, my opinion is Spain are too big, and they would be my selection to win. They have been very impressive going forward, and if they can control Italy at the back then they will win. The problem for Spain has been at the back, however, which makes for a very interesting game!