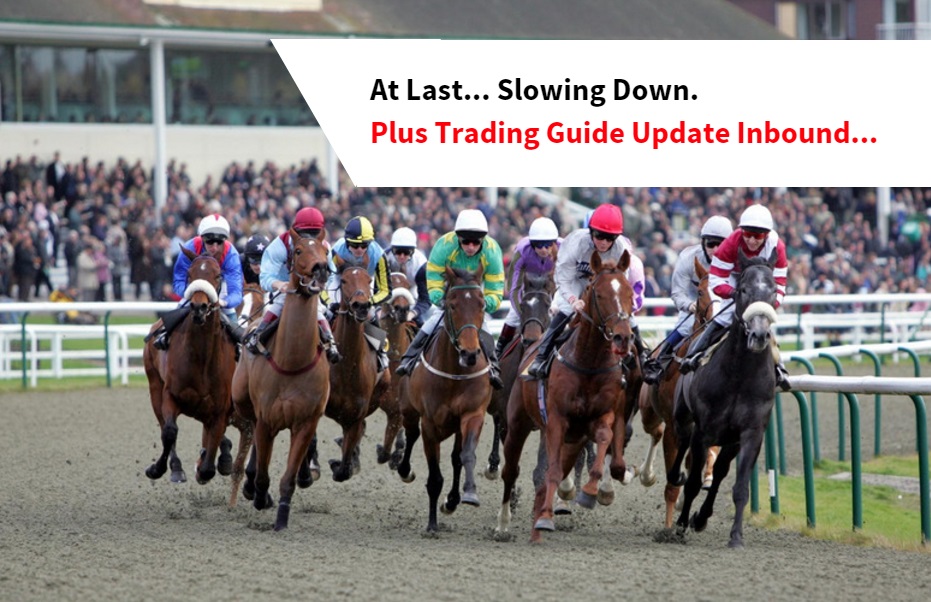 Finally! A chance to wind it down a bit.

If this is your first summer trading, you’ll find the coming months are about to go though a bit of a transitional period.

Jumps racing will come to the fore. Amount of races scheduled will die down, and the markets will get a bit thinner for a while.

From September on wards the markets can be a little dull at first. In my first year of trading full-time it left me feeling a bit anxious. Not because it was impossible to trade but because you suddenly go from heaps and heaps of races to far less. And of what there is, it’s not always the best quality. The all-weather will kick in of an evening more for the part-timers so that’s something to focus on. RUK at Kempton being the most favourable of an evening.

This year I’m thinking I need to do something different.

What should I do to mix things up a little? A mini-challenge maybe? Another break away? Nothing?

For a while I’ve been meaning to upgrade the pre-race trading guide. It’s been a while since I did it last, and I’ve made a whole load of notes and points that need adding in. Some of which I’ve meant to for quite a while. Beyond that I may look for an extra winter project.

So as I say, an update is inbound! When? I’m not going to put a date on it, although it will be shortly…

There’s usually one topic that readers ask for a little extra clarification on so I’ll be adding a packet to that specific area. I’ve made it my goal to make sure the topics discussed are crystal clear. No stone upturned as they say. I’m not a fan of ‘fluff’ and ‘padding’ and like to get straight to the point (not everyone likes that approach it I know). But there’s plenty extra to contribute.

Going deeper on the existing topics isn’t the only addition though. There will be some new extra’s.

For existing guide users I’ll put a shout out once released. As usual, the new, revised and updated trading guide will appear within the user portal to see. Also you may have noticed a couple of complimentary video clips alongside the existing documents in recent weeks. If you haven’t logged in for a while take a peek! …but remember, the best is still to come.

Not so long ago I put up a couple of very short, explanation videos on YouTube (like the one below). It was just a little tester really.

I’d like to know: Did you find them more interesting than the Q & A vlogs?

Let me know below:

12 thoughts on “At Last… Slowing Down. Plus Trading Guide Update Inbound”