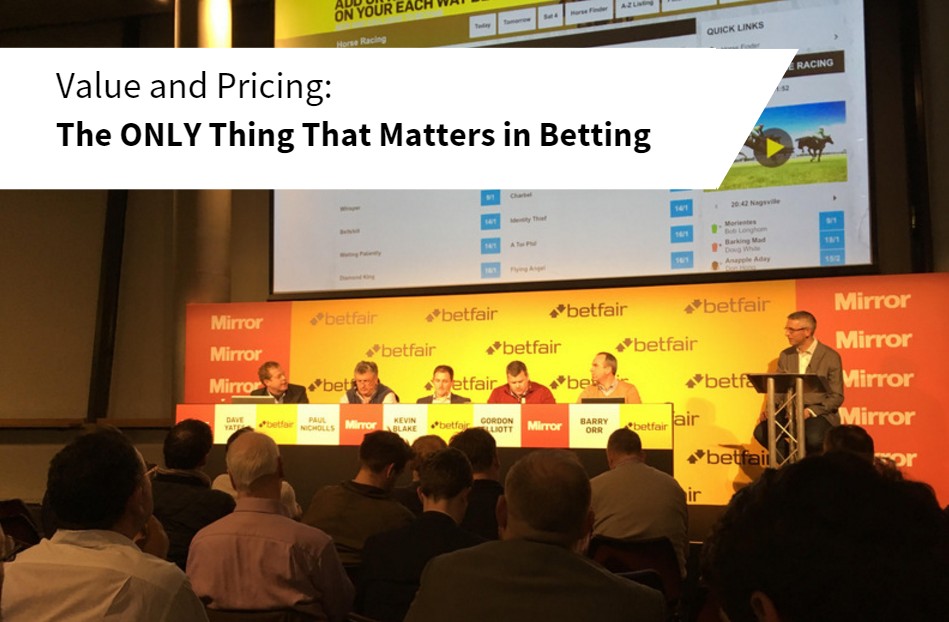 It’s sorry state of affairs really, such a simple concept to grasp. Yet it seems people are hell-bent on ignoring it.

Sure I’ve thought it before, but it really sunk in for me earlier this week when I attended the Cheltenham Festival preview night at the Emirates.

The only thing that matters is the…

Kevin Blake said exactly that whilst on the panel. Before they discussed the sports book prices for the festival.

It’s nothing against Kevin. In fact, I think he’s one of the better faces in racing by a long shot. I just thought it was interesting to see all the ‘experts’ on the panel, whom no doubt understand the nuances of betting discuss sports book prices, tipping 20/1 shots, not mentioning the exchange once. Obviously it’s just business, but it makes me a little sad with my love of the exchange.

The comment highlights an important point though. New traders often get hung up on many things from software to ROI %’s (return on investment) but the reality is; if you open at the right price, not a lot else matters.

By that I mean; if you open trade at a very good price, the downside is minimal. Even if you cock it up, it’s not going to hurt that much.

I discussed this kind of thing in a YouTube video last year.

Mr Webb come and found me during the evening, which made for more interesting conversation than much of it. We had a giggle at some of the price boosts between us, you can get £50 on at 7/2 instead of 3/1 for one of the favourites in one of the bigger races (or 4.9 on the exchange as we looked).

Hanging on Every Word…

It left me wondering who all the some 500 people there were. Those sat in front of us were completely absorbed it seemed, writing notes and jotting down prices… in fact one of them wasn’t so happy that we were talking amidst the waffle.

That said, the beer was good. And it was nice to have the invite from Betfair by way of change, thanks!

With the festival just around the corner, we’re about to hit a busy period… for those that haven’t traded a Cheltenham before, you’re in for a treat!

I thought there may have been more discussion about the exchange markets and turnover yet to come. In past months Betfair have put a little more effort into exchange marketing by the looks of things. Hopefully there’s more of that over the festival!

I’ll get a couple of posts up nearer the time, apologies for the lack of blogs lately but I’ve taken out over the quiet period.

5 thoughts on “Value and Pricing: The ONLY Thing That Matters in Betting”