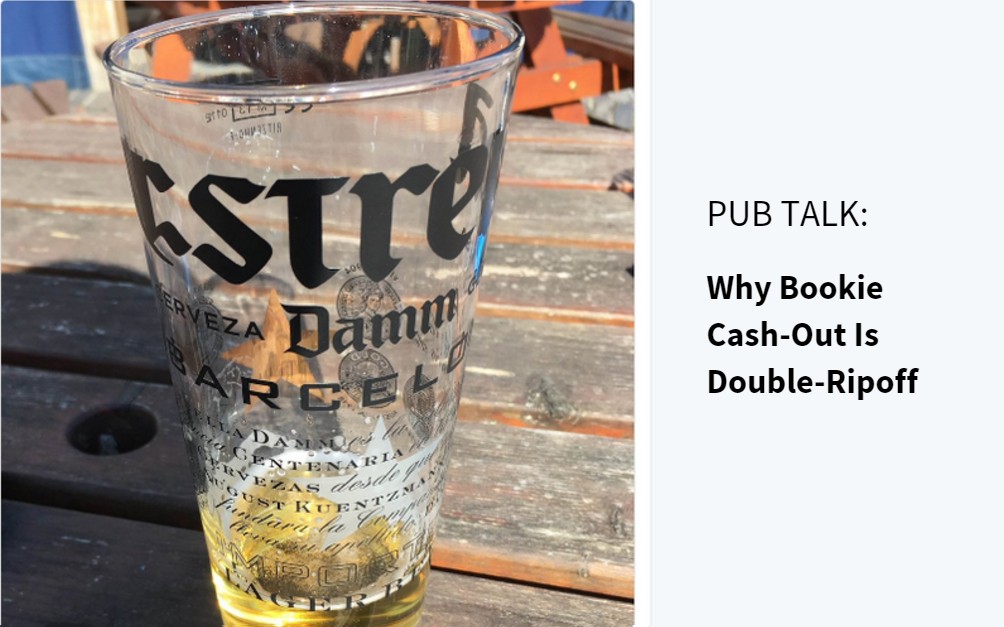 So I’m sat soaking up some rays over a pint in the week and the lads I’m with are tapping away on their phone’s… “not sure if I should cash-out, what you recon Caan?”

To which I respond; “If you want to get robbed, do it”. With a few confused, unhappy faces looking at me it was time to explain…

Frustratingly, I fear it’s the same for thousands of people with betting accounts – they just don’t understand how much they’re getting ripped off.

What cash out is? See this 2 Minute Explainer Video Now

Before I explain, I want you to know the motivation behind the ‘anti-bookmaker’ posts and YouTube video’s.

When I started out on Betfair many moons ago I was clueless. An average Joe, like many punters today… Just like those I was sat outside the pub with, mentioned above.

If somebody has a betting account and see’s it as a way of ‘recreational fun’ that’s fine, but I believe they should at least know what they’re taking part in.

Bookmakers absolutely do not want that to happen. It’s evident from all their advertising they deliberately mislead ‘customers’, further-more I’ve had to verify various social media streams recently as they’ve reported me to be acting as a bookmaker without a licence. Can you believe it?

On top of that, it wasn’t that long ago I met a producer from a well-known racing channel purely by chance. Talk naturally found its way to betting exchanges as you might expect, where it ended – “we’re not allowed to promote exchanges, our sponsors don’t like it”.

So it’s clear: They don’t like this very blog. Tough shit.

Why Bookmakers Cash-Out Is Now Double-Ripoff

So, back to the Cash-Out…

If you use a betting exchange it’s possible to place a bet, then cash-out when the price moves. Winning bets are subject to commission, simple.

If you use a bookmaker’s cash-out this is what happens: 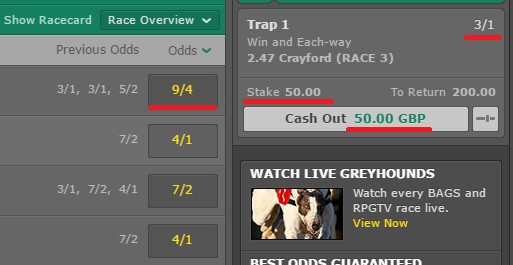 For those of you that haven’t quite spotted what’s wrong with the image above:

So despite the price dropping nearly a whole point in my favour. I can only cash out for the amount I initially bet, no profit.

If I had placed the back bat on an exchange I could cash out for £11.54 profit at this stage, with this stake, at these prices.

So where did the £11.54 go? In the bookies pocket (through risk avoided in this case had I cashed out). 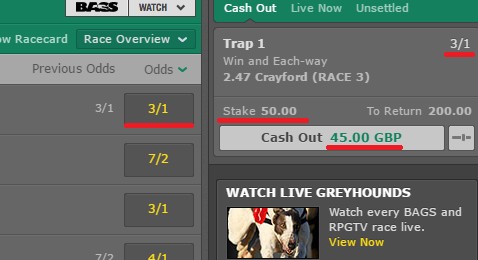 Despite placing a bet of £50 at 3/1 they are only offering a cash out of £45. So the price hasn’t moved but you’ve just lost 10% of your stake purely by using Cash-Out.

But How Is That Double-Ripoff?

Don’t forget that bookmakers create books at a poor over-round margin in the first place. So just by betting with them your odds would have been bigger on the exchange in the first place, almost every time. On the occasions that it’s not, they would either limit or close you’re account… much like the YouTube videos I’ve created previously.

If you haven’t seen that YouTube video, you can here.

Ever find yourself sat in the pub with your pals having a bet? Share this post with them

8 thoughts on “PUB TALK: Why Bookie Cash-Out Is Double-Ripoff”