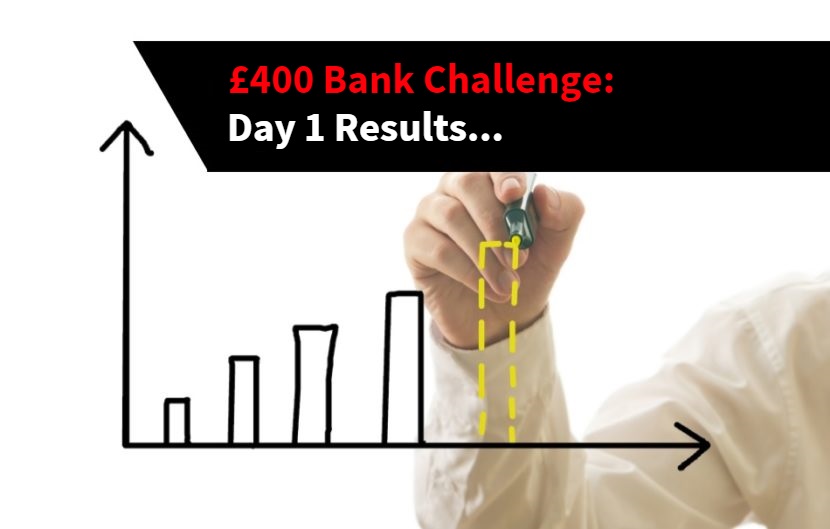 Felt a bit different to how I expected, but still – things turned out okay.

One thing I forgot about when posting up the challenge yesterday; doing something like this is like having a spectator over your shoulder, breathing in your ear!

The day started off moderately, first race being a loss, second not much better. But still, once I’d settled down into plugging away things weren’t so bad. As I said in the original post here, it’s all about consistency. Picking up profits, bit-by-bit, managing the downside and not exposing myself to too much risk. My trading style has pretty much always been this way; I’d much rather take smaller consistent profits than have a roller coaster profit and loss sheet with big peaks and troughs.

I didn’t take a couple of trades throughout the day on purpose. Purely because I didn’t want to risk putting myself under excessive pressure while ‘performing’ like a monkey for you lot 😉

Starting with just £400 wouldn’t leave a much margin for any kind of sizeable errors, so I stuck to the plan. Longer term readers will know; I’m anti-target setting for the day. But I exceeded the original post’s vague target of 10-15% so it’s considered a reasonable start.

Strike rate was pretty hot, more-so than usual for me. Although I probably gave away a little potential by doing that.

Not sure quite how I’ll come at it today just yet. I’ve managed to knock a cap off my front tooth which looks pretty bad. Emergency dentist booked in for early afternoon so I may catch a few less races.

On the whole, not that much I can say to critique myself. Other than it’s visible in the results I pushed a little harder as the session went on, not necessarily a bad thing but given overall market average I wasn’t really any better off for it. I think way too many would-be traders do this, pushing for that feel-good result. Sure, the £2 and £3 results aren’t exactly that exciting, but when you team that up with rarely losing you can see how profit builds nicely. Taking those small wins consistently is a far more realistic approach too.

In my mind, and I appreciate it may not be best for everyone as we all operate differently. I will always respond positively (in general) to consistency, I just don’t like the feelings and emotions that large up’s and downs bring out in me. I guess I’m only so aware of this due to the amount of time I’ve been doing it though.