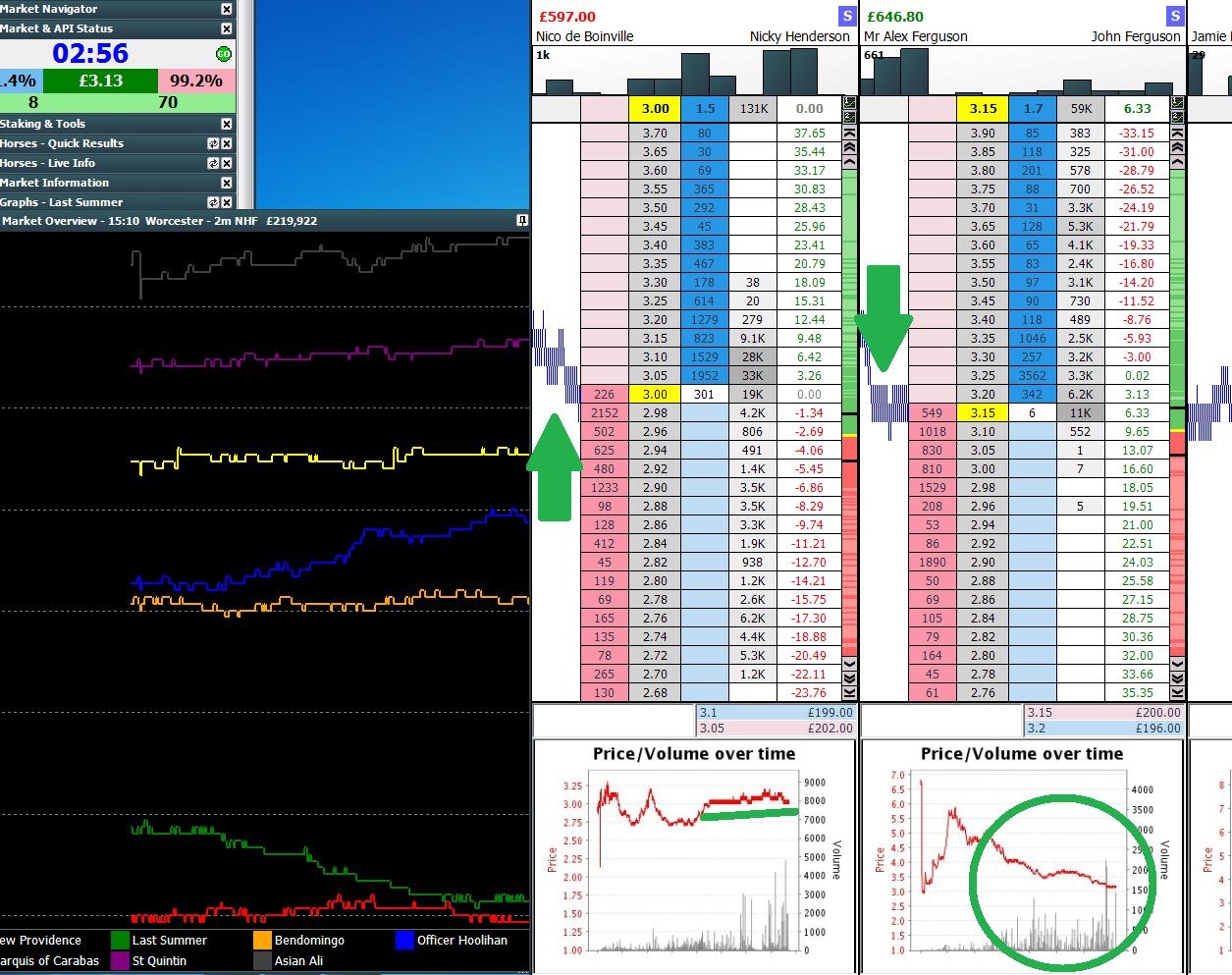 Reading a market can often be a tricky business, but every now and then everything clicks into place…

These are the golden moments! Realising when one is about to happen, and making a really good job of things can often be the difference between making £300 on an afternoon and £600.

It’s crazy how, making one big profit can really give your mindset a positive boost in Betfair trading. I’ve posted about it before but these situations are just proof of that.

So what do I mean by this?

The image above is a pretty decent illustration.

Betfair trading, particularly in horse racing markets is all about market sentiment. It’s like a domino effect, spotting positions as they build in tension is key when anticipating a move. Being able to do that is the sweet spot in my opinion.

I’ve highlighted a few things above, in no particular order…

The front two in the market are of similar prices and fairly short in price too. At these prices, the market rarely stays static.

Also, it’s fair to say in most cases they will repel each other. In this instance, I’ve taken a small position of £200 on each of them after a little jostling about to get the best price I can. As my beliefs are confirmed. I actually added to the position to maximise profit.

The Betfair trading graphs at the bottom are a bit of a pain as there are no particular time-scales they abide by. As the more are matched, the more they change.

Two things are noticeable here. It’s never a good idea to be so hasty as to base a trade on them.

On the left, the favourites price has stagnated somewhat over the last few minutes and marginally drifted out. Also, which is a real bonus, it is currently trading around 3.0 (one of my favourite lay prices). To the right, the second has had some support. The majority looks to be back the money, with the price coming in a little.

Also having watched the market for a few minutes, I can tell the general market sentiment over that time has been supporting my trading positions. If you look at the market overview history, you’ll see that is correct.

You can’t really see from the image above although the market is around that stage of maturing where prices start to head in their ‘true direction’ for want of a better phrase. Which is something I’d consider a positive factor? Betfair trading is often quite confusing when you’re just starting out, but one of the main questions is ‘what graph do you base a trade on?‘ If only it was that simple!

I’ve put this post together to try to help make the point – don’t ever base a trade on one thing!! unless it’s a horse throwing a jockey off of course!

So no matter what stage you are at in your Betfair trading journey, would you have done the same thing?

To re-cap – I took the above position based on the fact that; General market sentiment is in my favour, the prices are not in a very static range (for a race of this nature), favourites been weak, price supports a drift on fav, the second favourite appears to have been back a little, still time left for a move to evolve. And even then I wasn’t yet confident enough to up the stakes.

Most things here, have clicked into place. Betfair trading often has a habit of catching you out when you get too excited. I think I still did the right thing here by working into it, despite losing a few ticks. Needless to say, the price crumbled on the second favourite shortly after. The favourite then drifted out, before bouncing around a bit and coming back.

Something else to bear in mind – If you see a strong opportunity building up like this, and don’t end up making a decent result, or even a profit from it. Don’t be too hard on yourself! It’s counterproductive in Betfair trading… and something I’ve learnt to see quite clearly, it’s not a case of failing, because it was just another situation where you were paid in the experience instead of money!! Fail forward.