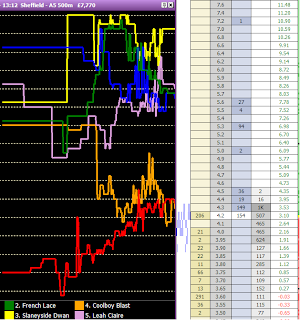 Here’s a screen shot of the very first dog’s race I did today…..

Because of this I did something I normally wouldn’t do at all, it paid off but afterwards I was sat thinking maybe I should have got more involved, but then again im not keen on big risk’s.
So what happened? I started trading as usual about 2 minutes or so out and £1000 appeared on the lay side, I didn’t believe it at first until it was dragged up….. if you look at the market overview the first big spike upwards.

I watched a bit longer intently and took a position, again some more lay money came in, and again in smaller increments… so I entered and exited a couple of times.

As it got close to post it became very obvious with some £500 lays flying in that someone was really laying this dog (bent dogs race?), you can see the amounts matched in the traded volume column. This kind of behaviour was very aggressive, more than I have seen before probably so I had a decision to make, is this shrewd money? do i take the risk? or is it the ‘bomber’ hitting the dogs up?

I decided to take a little risk and lay it for £20 giving me a £56 loss if it won and £21 if it didn’t. It’s just a shame the price wasn’t smaller as I would have been happier to take more risk seeing the rewards would have been bigger, anyway I didn’t see the race but it obviously lost when I was paid out!
My view on the dogs is that sometimes when there is a lot of money bet, it’s often quite genuine, sometimes ill leave it unhedged but this time I took a small punt for a risk I could afford, was just shocked about the amount laid on it really though so I took the above screen grab!

Anyway that was a pleasant start to the day, I started later than usual so only got about 3 dogs races in before the racing and followed up with a few more afterwards as I see they were on tv, one of which I left unhedged and it paid off… don’t think I could do too many of them each day as its a lot of effort for the return.

Here’s how it turned out…..