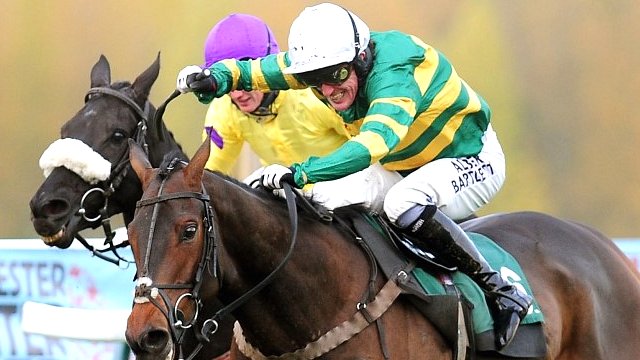 I Personally thought his 4000th winner was a hell of a ride, you could tell all the way around he had his heart and soul in it. I don’t think many could see him winning right until the final stage of that race, its seemed to come from nowhere! I wouldn’t be surprised if some of the in-play traders got stung by it.

AP had two rides that day and with all the press hype it was evident to me what would happen as I hinted to followers on twitter, his rides were to be severely under priced! Turnover also seemed to be enhanced aswell. For them reasons it seemed to be one of those sort of opportunities that don’t come around every day, when his first ride didn’t win I couldn’t help but smile as I knew we were all in for another late price drift on the second runner.

I can’t remember the top price it hit in the final minutes although I know it was higher than 2.84…

I’ll be looking out for future hype like this a little more closely as undoubtedly it was the reason for the conditions and change in price (just a shame i wasn’t sharp enough to back it the evening before too).

So this week I’ve revisited something i used to some time ago and have on and off, early trades.

Now the problem with early trades is finding runners with enough liquidity to get matched against early on, for that reason alone it’s nearly always easier to get in early on a friday night for a saturday race as the volume is up.

However it is possible daily to find a runner that is more than likely to move in your favour with some liquidity mid morning, the only negative being if you wait that late you could have already missed some of the move! I think all my pre race trading knowledge has helped me greatly to when I first started to try to do this. The only other thing that stops me is sheer laziness, I know that sounds terrible but if im to trade for the afternoon and make a significant amount of money then to make 20 – 30 quid on a morning trade feels less important. Over a month though them values per day soon adds up so im making a conscious effort to do it more! If you’ve been following me on twitter this week you will have seen me put up some selections yielding good results…

Exiting the trades seems to be the other problem as often it can be hard mentally to either add to an already good position in a lower liquid market or adversely not scale out too soon! I like to scale out a portion of my stake once it goes in my favour as it’s just good practice, im a trader not an out right punter so even if the wins aren’t so big but the consistency is very high im always happy.
I’d be keen to hear anyones opinions on early trading from the evening and morning before the race….. quite possibly I think its something I could scale up at times to make a significant difference.