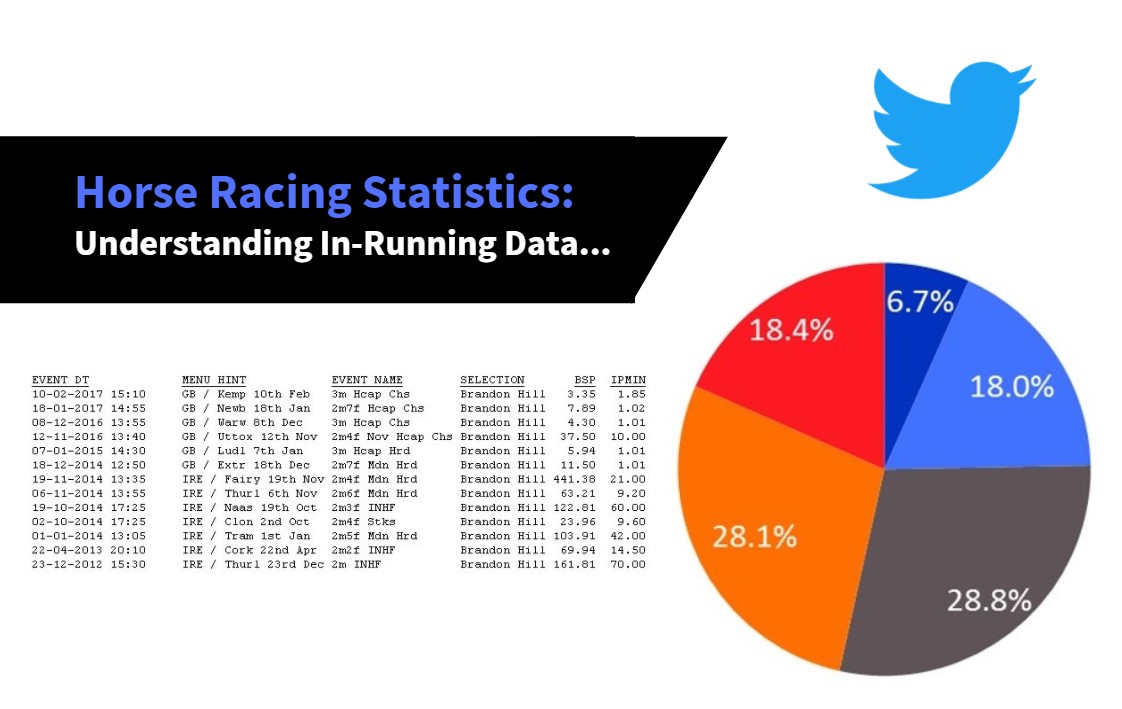 Foolish, but I assumed all would understand them fully…

But, obviously there’s not a lot of point in sharing if they aren’t interpreted right!

Here’s a quick guide on what the numbers and stats mean, and how they could be used to your benefit.

Looking For Trading Strategies? Sign Up Here. Get extra info direct to your inbox now…

Before they’re explained, it’s worth noting that previous price data is exactly that. There’s no guarantee this will happen every single time, further runner analysis is a good idea before putting down any kind of bet. Also, readers should remember that the whole idea of trading is not to win every time, but to build profits over the consistent application of an edge. Recently there seems to be more users punting on a price move, and then calling it a trade if it worked out…

So, the horse racing statistics:

Above, you can see the historical in-play statistical data for ‘Brandon Hill’. From top to bottom in time (Event Date and Time).

To next column along speaks for itself. ‘Menu Hint’ being the Country, Track and Date the race took place. Followed shortly after by the ‘Event Name’ including the race distance and type. Selection name goes without saying…

The part that some may be confused with are the last two columns. BSP stands for Betfair Starting Price and IPMN means In-Play Minimum, the lowest price at which the selection traded for more than £2.

If we were to create an example from the table above:

Brandon Hill raced in a 3 mile handicap chase on the 8th of December 16 where the starting price was 4.3 (10/3). Within the race Brandon Hill traded at a low of 1.01… because the selection won. Simple enough, right?

The black set of statistics may be the screen that appears confusing, because some have assumed the list of numbers on the left are previous results, they’re not.

Below this, left to right is the selections Betfair ID. Not to be confused with anything else, the selections within the given race and prices that there is money available to match. Antony is available to back at 4.3 and lay at 4.4 if you take a peek… 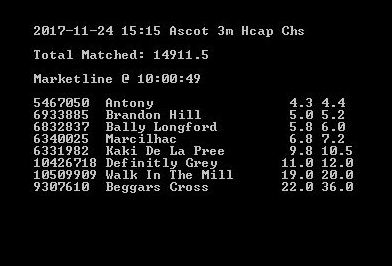 Now, lets take a look at how you could use these horse racing statistics to your benefit!

Depending on your betting experience, you may already have spotted a range uses for horse racing stats like this.

Like we said previously, past performance isn’t a guaranteed indication of the future. However, it’s hard to deny that this is a good way of identifying a horses appearance whilst running. Horses that ‘travel strongly’ often trade lower in-play. Others may run prominently or lead, either way the horses preferred running style and appearance shine through in the data.

Brandon Hill is a good example of this.

If you take a look at he previous runs, the selections statistics showed a price reduction of 50% or more in-running nearly every time. These kind of statistics are extremely useful for anyone that is looking to use a dobbing strategy whilst the race is in-play.

Given all of this information, how did Brandon Hill run on the day the stats were released?

Obviously dobbing isn’t the only strategy to use when looking at this data, there’s many ways to ‘skin a cat’ on the exchange.

That may have gone over some readers heads, so here’s a little example of how you could do this – including the numbers.

If we run through a hypothetical trade on Brandon Hill on the 24th. We’ve seen the pretty impressive strike rate at which Brandon Hill trades in-running, using the historical horse racing statistics. So we decide to place a £20 trade, in the anticipation Brandon Hill will trade at 50% of the starting price, in-running.

Except of course, if Brandon Hill’s previous horse racing statistics are anything to go by – there’s far more than a 50/50 chance of both bets being matched.

Assuming commission was at 5%, we would have incurred a £1 charge on our winnings. This would need to be factored into your overall decision as to which selections you place this trade (knows as a DOB).

Thanks to GBettle for posting these stats up on twitter each morning.