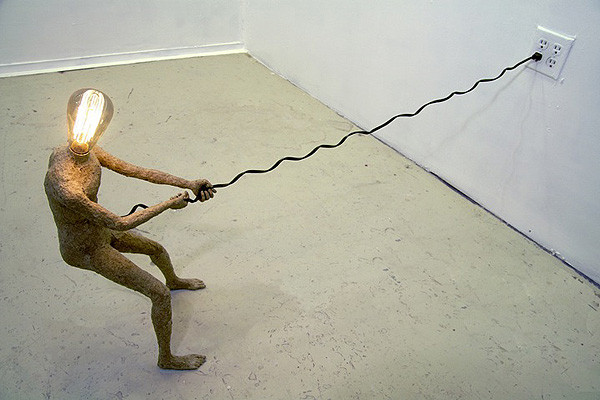 I’ve got a busy few months ahead of me leaving work so posts have been a little infrequent lately.

All-in-all it’s not been too bad, excluding a few ‘blips’ shall we say.

Yesterday I spent more or less all-day trading, with the family out I had plenty of space to focus on the markets. With races going off more-or-less every 5 minutes there was barely time to breathe.

Initially I got off to a good start, followed by my usual trademark of doing something stupid! Followed by a bit more stupidity, then finally getting a grip to come back for a mediocre return on the afternoon.

Below show’s the race by race results… 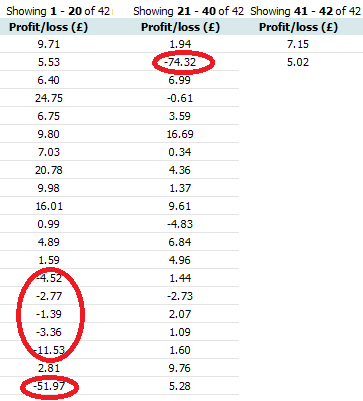 I’ve circled the mistakes that highlights my mood. Its quite obvious to me that, after a couple of blow-out races my mind wasn’t right. I did manage to do the right thing though; have a break for an hour or so and come back with a fresh head. It’s really important to do this I’m finding. And if I intend to trade full-time it needs to become part of my

This months been a bit of a roller coaster ride towards the end. Mainly because I’ve started to push myself beyond the comfort zone.

After a steady increase of confidence, and stakes things are picking up. By using larger stakes I’m finding theirs a fine line between a big green and a big red. It’s a little more testing on the mind, but overall the results have been positive. As the saying goes; learn by losing small, and now I’m starting to learn how to win bigger (now I have a consistent edge).

I’ve started keeping track of my efforts in excel… Spreadsheets aren’t really my kind of thing but it makes sense to know where I’m at.

Running total of profit shown below;

The interesting bit is the rate at which the curve is starting to climb. Maybe in this image it’s doesn’t look all that steep but when you bear in mind that last quater is only a weeks progress, which is almost in-line with the first two!

Looking at the results in more detail shows im making mistakes on Saturday that, doesn’t look too bad overall (as im still pulling a decent total). But really the ‘mistakes’ are a bit out of line with the rest of the days. I’ll be keeping it in mind next Saturday for sure.

On some Saturday’s if I could keep my losing markets in check I would have made nearly treble the amount!

While it’s definitely an area for focus I do except having the occasional big red is all part of it. Maybe I’ll just focus a little more on when I can turn the pressure on with the stakes etc. as I have a gut feeling it may be the only difference. I should also add: seeing the graph doesn’t do it justice at all, from the sheet it looks like I traded around 60 hours this month… but I guess it’s going to take a fair amount of hours to really crack it on the level I want to!

So where does this leave me in the grand scheme of things?

I’m quite happy with how it’s all going and hope to continue as I am. It’s been a little difficult lately as there’s less to blog about other than ‘I‘m doing well, I made a mistake but its ok‘. Right now the main aim is to increase my stakes gradually while maintaining the same levels of consistency. Consistent trading really does seem to be the holy-grail for me, I just can’t cope with the big high’s and lows in my profit and loss sheet you may see elsewhere.

I’ll try to make future posts as interesting and get a bit more creative. With everything going on, leaving work etc. Posts may go to weekly rather than daily for a while…

As for today’s trading everything went well. I only had 2 losses in the couple of hours traded, amazing how when you have the right attitude it makes all difference!!