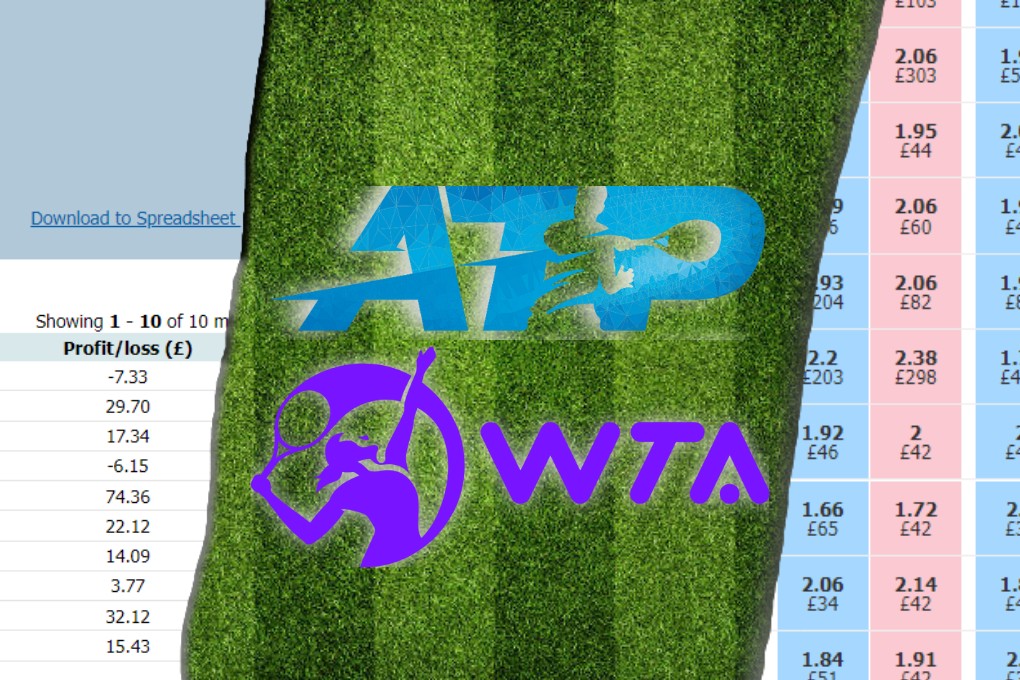 If you’re looking at tennis trading on Betfair then you’re probably wondering if you should focus on men’s tennis, women’s or both.

It’s possible to trade both WTA and ATP games, but only if you understand the key differences between the two. They are very different games on the court and in the markets.

So, which should you trade?

It really depends on your preferred style of trading. Both men’s and women’s tennis are essentially two different types of markets. The difference in strength causes the games to take a slightly different shape, which in turn affects how the odds move. The more aware of these differences you are, and the more you plan ahead, the easier it will be. Attempting to trade the two in exactly the same way, is a recipe for disaster.

Due to the difference in strength, men’s tennis lasts longer than women’s. Men’s tennis can have up to five sets whereas women’s matches have three.

As a women’s match is played over a shorter amount of sets, each set won has a larger effect on the market. If a player wins the 1st set, they only have to win the second to win the game. This makes almost all of the women’s tennis markets more volatile.

On the contrary, men’s tennis is less volatile. If you are entering the market based on sets won or lost, you will naturally have more entry points in a men’s game. For example, you may have formed a view that Player 1 is going to win the match. If your strategy is to back Player 1 after every lost set, you could have up to 3 entry points (Player 2 would have already won if they got 4 sets).

You would only have one entry point in a women’s match using this strategy.

Of course, that is an extremely basic strategy and I wouldn’t recommend anyone actually use it without some serious revision, but it just goes to show the differences.

You will notice that in women’s tennis, breaks of serve occur far more often than in men’s games. This is again, mostly due to speed and the strength of service of the players. It’s another reason why women’s tennis is far more volatile. The match can change direction at any moment and other traders know it. This can cause panic on the court and in the markets. It’s an opportunity to profit from tennis trading on Betfair.

Ultimately, this brings buckets of potential for short-term swings in match odds as players look to quickly close or enter positions.

There are a few different types of tennis court: clay, grass, hard courts and carpet. Each type of court has a different characteristic and will affect the speed and the bounce of the ball. Clay courts for example, typically result in slower play and higher bounce.

These characteristics will have a slightly different knock-on effect for both men’s and women’s tennis. For example, a court that causes faster play and a lower bounce will potentially make a women’s game even more volatile than it already is. It’s important to be aware of how the court is impacting the game you are trading, no matter if the players are male or female. Check out this tennis trading strategies article after this one for more help.

By now, I hope you’ve noticed that men’s tennis is more conducive to longer-term trades whereas women’s is quite the opposite. It’s easy to be aware of this but can be hard to put it into practice. Although there is more time in a men’s tennis match to come in and out of the market, it doesn’t mean you should. It’s often best to just go after the biggest opportunities that a game presents instead of jumping on everything you see. Tennis trading on Betfair is about finding value in what you see, not what you want to see!

People often struggle to get their entry timing right in a WTA market. It might be because they feel pressured into entering before the set ends, as there aren’t as many to choose from in a WTA match. If you’re trading sets in a WTA match, you need to be precise with your entry or you could get stuck in a bad position. Another option is to trade breaks of serve. There will be more possible entry points so it’s important to pick the best ones that suit your strategy.

Remember, the best trades are often the simplest.

Prize money has caused much controversy in the tennis world. Previously world number 1, Novak Djokovic has been noted to say that men should be awarded more prize money than women.

As it happens, all four Grand Slam events and combined masters events pay equal prize money. However, women’s only prize money in WTA events is up to half of the equivalent tournaments on the ATP Tour.

Does this make a difference to traders? Not necessarily.

The biggest factor in how much money is available is whether the game is televised or not. This makes sense as televised matches usually feature well-known players but also because live tennis traders actually have a video feed to help form an opinion on the game. Many in-play tennis traders will rely on the video feed to judge how well a particular player is playing or whether they are about to tilt. Take a look at the picture below and notice the difference in money matched for the games that have/haven’t got a video feed available. 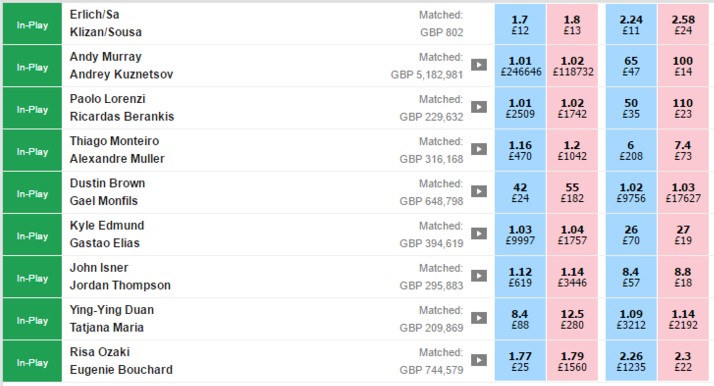 All of the markets pictured above are part of the French Open, one of four Grand Slam tournaments. These will naturally have a higher turnover than smaller tournaments. As a rule of thumb:

Whether you are trading WTA or ATP, make sure there is an adequate amount of money available or you will find it difficult to get matched.

The best way to understand the key differences between WTA and ATP is to spend time watching the matches and how the markets react to key points in the match like sets won and breaks of serve. The markets react according to many different types of conditions, but it’s vital you understand how WTA and ATP games differ. There’s more advanced help available on the link below.