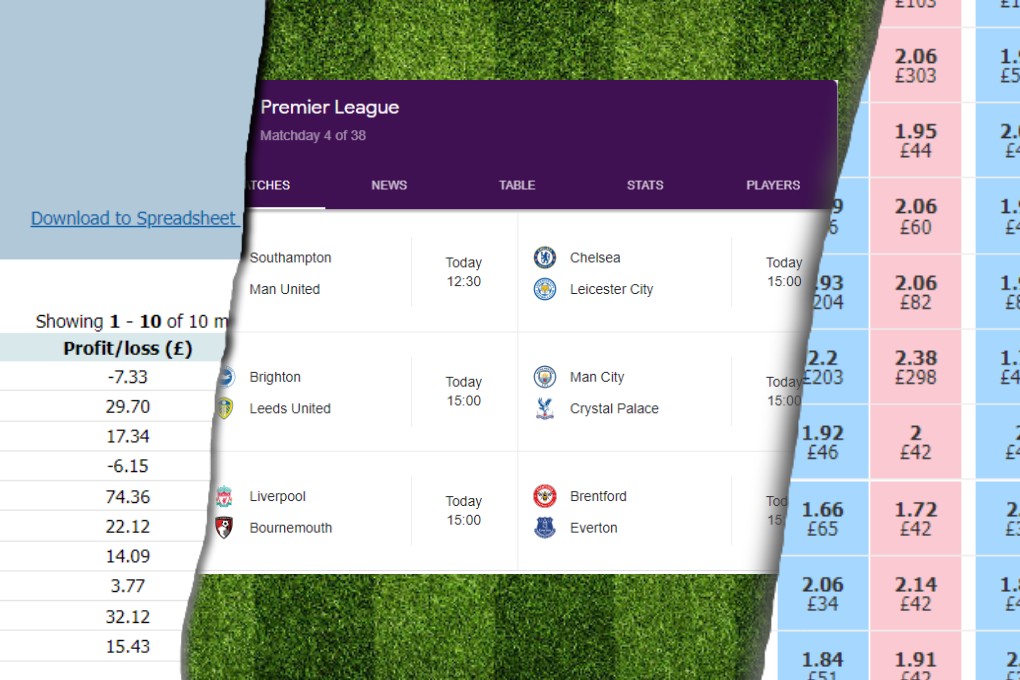 It’s Matchday four in the Premier League. I always like to let things settle in for the opening three fixtures, and then from this weekend on we can start to take bigger trading positions.

We have had the luxury to see three performances from each side, and while we have a small sample data-wise, the xG picture is starting to build.

We have no major showcase fixture this weekend. Liverpool and Manchester City are very short prices at home, Arsenal, Chelsea and Spurs are all 1.5 or lower and then Manchester United are 1.85ish away to Southampton.

There are seven fixtures Saturday which is clearly too much to fully cover – especially with some action from Europe too. My trading plan is to focus on the TV games and then the select few during the afternoon where I have a strong opinion.

There are some overlaps, so it’s going to be hectic at times. I haven’t even included the Liverpool and Manchester City games there at 3pm on Saturday – probably always worth having those windows open in case an opportunity lands but I don’t have a strong opinion before the off.

It’s a fascinating start with Southampton v United early doors. We’re only three games in and United has already been all over the place – up, down, all around as the song goes! United turned up against Liverpool but we have seen those type of performances from them against the top clubs. Usually, they crash back down to earth afterwards, and this is a game to watch closely in the first 15 minutes. The market will be very twitchy on the United price here, and if they start under pressure then we will quickly see a sharp drift from 1.85. It’s worth asking yourself what price would United be here if they got beaten by Liverpool because that’s the price the market will quickly go to if Southampton starts on the front foot. Definitely a window here for a nice lay trade on United. After that early movement, I would sit out of the market until the final 30 minutes, where we should see accelerated time decay on United too should they be struggling. One performance doesn’t change much, let’s see what United can do here.

At 3pm I have a strong opinion on the Brentford price. They are too big at 2.12. Brentford put in some exceptional home performances last season without much luck. Their xG figures were on point. The 3-2 loss to Fulham last weekend is a worry – especially with the xG figure they conceded but they are much stronger at home. I wouldn’t even rave about the 4-0 United win here – I am more confident when you look at the over all picture of their home form since coming to the Premier League. Everton is a poor side too for the taking. When I have such a strong opinion on the odds here, it is hard to control yourself. I’m going to be fighting time decay the whole market unless Brentford goes in front so it’s all about picking the right times to get on Brentford. I’m mainly looking for stalling points within the market where we can hold a position with 15/20 minutes without losing many ticks – more on stalling points in the Football Course.

We finish Saturday in the Premier League with Arsenal hosting Fulham. Arsenal is a short price here so I don’t see myself doing much trading in the first half. This is definitely a second-half game for me, and then if conditions aren’t right at half-time I’ll just walk away from the market. This seems an ideal fixture for the Last 15 strategy – it suits most of the Second Half strategies in the Football Course to be honest but let’s see where we stand at half-time of course.

On Sunday Aston Villa v West Ham and Wolves v Newcastle kick off at the same time and I’ll be focusing on Aston Villa v West Ham. Much like Brentford on Saturday, I have another strong opinion on the odds here. I just don’t get the Villa price at 2.4. This looks exceptionally short, and this time I’ll be happy to work with the time decay. It’s easier to have a strong opinion laying a side rather than backing because you have the market working with you 90% of the time! West Ham has lost their opening three games, sit bottom of the table no less, but they haven’t been too bad. They had to play Man City and were average v Brighton but unlucky v Nottingham Forest. Villa are a woeful side in my opinion. Their xG figures are so poor and they are always overrated and overbet in the market. They are one of those sides you want to take on every week. I’ll reduce stakes a little here because of the opening run from The Hammers but overall it’s not a major worry.

Then we finish the weekend with Nottingham Forest hosting Spurs. Forest will be happy with their four points so far no doubt, but they have conceded xG figures of 1.98 v Newcastle, 2.65 v West Ham and 1.56 v Everton. They clearly have problems at the back which haven’t be fully highlighted yet if you aren’t looking at the xG figures. Spurs could run riot here in the second half.

Those figures are clearly worrying. Conte has Spurs playing a nice attacking brand of football and again I’m largely happy to see what happens in the first half here and get on the Last 15 strategy with goals expected from Spurs. Keep an eye on the xG figures and see does everything line up at half-time, but this is definitely one for the list.

There are a couple of clashes this weekend but some of these European markets caught me eye. Definitely keep a tab open and keep an eye on the xG figures. Schalke are back in the Bundesliga this season, but they haven’t changed too much. They were woeful during Covid and finished bottom of the table, then bounced back up but had plenty of losses in a weak Bundesliga 2. Union Berlin have been performing very well for a while now, and they are a massive price at around 2.4. Once again much like Brentford, who could easily have a fixture clash come 3pm too, you’re always working against the market here. There will be less stalling points too with Union Berlin away from home, but this price stands out to me. One to watch.

Then the Bayern Munich game at 5.30pm Saturday and Barcelona at 6.30pm on Sunday really stand out as markets you want to support goals in, late goals and the first half goal strategy too might be ideally suited to these games. I might even focus on the Bayern game over the Arsenal game in the Premier League if the figures look better.

Hopefully, it’s a decent weekend, it’s great to have football back!

Related: Football Is Back! Premier League Trading This Weekend