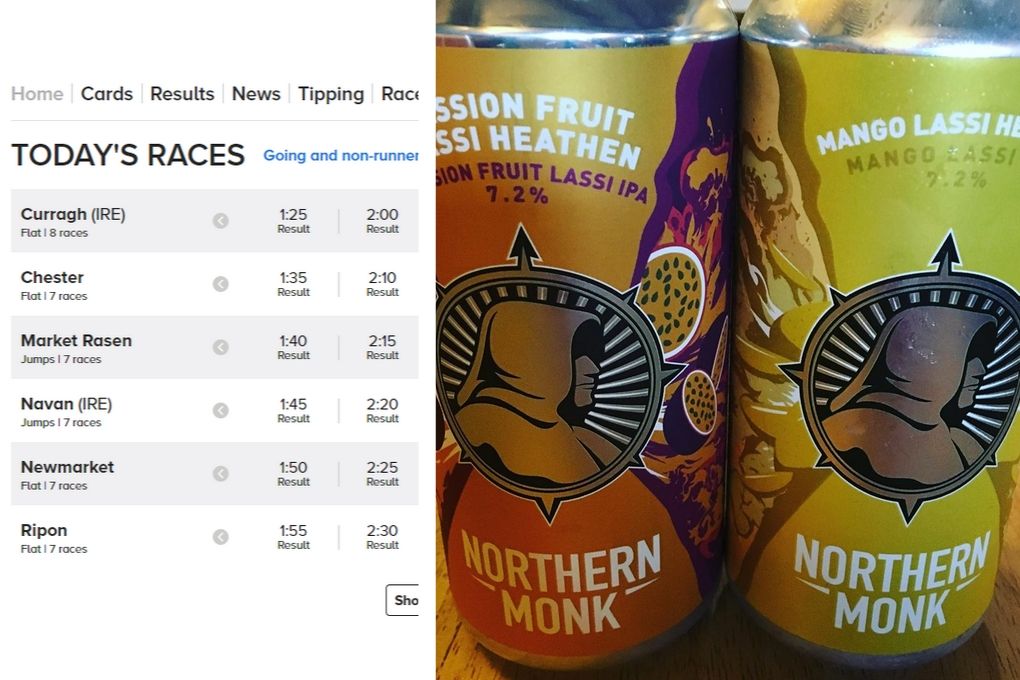 Its been a long time since I’ve done it, but today was a complete write-off for me…

I’ll be the first to admit it, it’s not my finest hour and I should know better, but letting off a little steam rendered today’s activity in the markets useless (and frustrating).

I’ve often been heard to harp on:

“the most important thing not always what you do, but what you don’t do!“

…well that was a waste of time (and quite stressful).

It all started last night. You know, one of those ‘catchup beers’ with friends you haven’t seen for a while, that inevitably leads into a few more beers. And then some of this stuff…

It’s safe to say, the Northern Monk had me – in multiple ways. A different but moreish bevvy, that will leave you waking up with a hangover capable of killing a small child.

Foolishly, I rallied around to down a full English before the afternoon’s racecard. Not wanting to miss out on a few quid I jumped into the hot-seat with a little time to spare. I knew it was less than ideal but I did it anyway. Going against my own advice quoted at the top of this post.

After an hour or battling back and forth, I gave in. A few unforced errors leaving me at a whopping £12 profit.

It could have been worse, but at this point I admitted defeat. Continuing would be likely to end in tears. Despite being over the worst of the hangover, my concentration and reactions were totally off…

Moral of the Story:

Even after all this time, it’s easy to make mistakes and slip into poor discipline. I should have chosen one or the other; have a few beers and finished up early, or plan the day off. There’s nothing wrong with a little work-life balance, but blurring the line is a recipe for disaster.

This time I was fortunate, maybe the benefit of experience helped me. A lost opportunity is better than an irrational trading mistake, there’s always next week.

I guess there’s one more point to be made here too. Don’t mess with the Northern Monk!

Hopefully, you all had a profitable days trading. If you didn’t, I sincerely hope you haven’t got a headache to match mine…