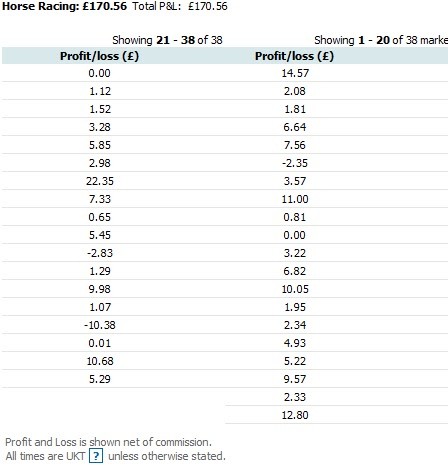 [Posted July 9th 2011]
–
Hellooo all,
–
Hows everyone been finding the markets since the new PC plans have been announced??
–
Personally I think their has been a bit of a change although im really not sure why?
–
Today felt a little difficult to wangle out any decent trades. On the whole it seemed rather thin and choppy with a lot of pushing and pulling between big stakes, the only real solid races were the ones on channel 4 I thought… or is it just me? (in comparison to the last couple of weeks it just felt a little different) Can drive yourself mad with this sometimes as you just can’t be certain…
–
That said, if you’ve seen above the result it wasn’t so bad. It shows it’s possible to be consistent in some rough markets, although them results don’t really show how my day trading went. So many times I was on a decent result for the race to only reduce it to a couple of quid in the final stages. I shouldn’t complain as a total of 35 out of 38 is above average in terms of strike rate, unfortunately the numbers don’t show the frustration at times…
–
At time’s I had to force myself to sit back and watch, it worked as I avoided getting in trouble when I would have at times with those horrid ‘maybe trades’. Managing my potential risk is obviously the most important thing to do, using smaller stakes seems sensible at times with the nature of the markets, flying about all over the place!
–
Trying to remind myself it was a success feels difficult at times, as the temptation is to look at what I could have had…
–
On a positive note it just goes to show though you don’t need to be using huge stakes to have a half decent day. Thinking like that leaves me hungry for more!
–
I might try to have a dabble on Betdaq soon with the PC situation, can it be much more difficult over there?…. in theory it shouldn’t be too much different. Having seen other traders speak on the various forums though it may not be the case.
–
Thinner markets seem to bring bigger moves in comparison to a more fluid market, or at least faster ones. I guess the only difference should be to those is using larger stakes (far bigger than I do currently). My other thought is it may be a little more challenging mentally. Having more strings to my bow can only be a good thing though, right?
–
With the majority of races being fairly thin (I mean in comparison to big events and maybe a weekend) it might be wise to focus on improving my longer term trading. Would be interested to know what type of approach others prefer to take?
–
Keep it green!