AP McCoy a legend in his own right, as far as trading Betfair goes I owe him a few quid, Here’s how…. 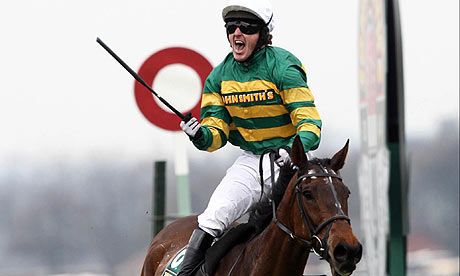 As far as trading Betfair goes there are very few jockies that have the power to influence the market heavily. One exception being AP McCoy, over the years he’s quite rightly earnt the title of superstar jockey. While there are others I’d say he possesses the most power to influence the market one way or another. Unfortunately he recently announced his plans to step down at the end of the season. I say unfortunately as over the years he’s helped me make a packet at times. Hopefully it doesn’t take too long for the public to affix themselves to a new superstar…

So how can one jockey have such an influence on the market you may wonder? Quite simply by winning…. a lot! Of course it’s not just a case of his mounts shortening in price because he’s aboard. In my experience it often comes when he wins several times in one day. Let me explain in this video I recorded on 23rd of Feb (Sunday).

Over the years there have been many different opportunities like this from AP. Others can also cause these effects although its more notable the jockies in the public eye. I can only imagine what must have happened to betting markets the year Frankie Dettori famously had 7 winners in one day! Back then in 1996 trading Betfair wasn’t on the cards unfortunately as the exchange hadn’t yet been founded. Hopefully it happens again though at some point (preferably next week at the Cheltenham festival, that really would be a dream come true).

Having a significant edge at times like this can be really helpful although it’s important to keep the right frame of mindset in toe when trading the markets this time of year. You’ll notice in the clip although it may have been an exception with the favorite I only tested the market with smaller stakes on the second runner. Admittedly it was to keep things simple being on a larger stake elsewhere but im still always cautious of not getting on too heavy until im certain in the February markets. The good news is from Cheltenham onwards things should really heat up with betting activity – just in time to fill yer pockets with cash for the beer garden!

On Monday public support for AP McCoy was no different either…. The win in the first race helped the support in the last as well.

And the last race….

If you enjoyed this Betfair trading video you might want to check out the YouTube Channel here (subscribe to get future notifications when videos are added).