Only two weeks to the Cheltenham festival 2015… Who have you got your eye on? 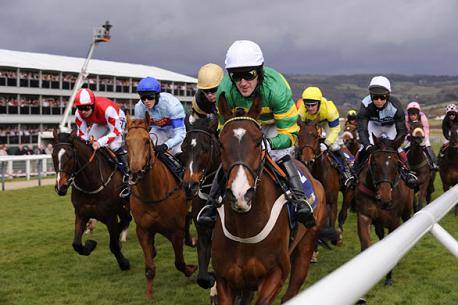 Only two weeks to the festival now and its starting to get mentioned more and more in the press. I always love this time of year as although the markets are crap it’s only a matter of time before all that juicy liquidity turns up, and offers the potential for some big profits!

Earlier in the week there was the news of AP McCoy retiring by the end of the season. For me it’s a bit of a sad moment as his influence at times has aided me make some hefty profits. Hopefully he’ll go out with a bang over the festival and land some big multiples. With McCoy going it won’t be long though im sure until the media get their teeth into some new hopefuls to fill the void.

If it’s your first Cheltenham it’s easy to get excited in the markets as there is just so much money its nothing like you’ve seen before. Taking it easy and keeping consistent instead of going for the massive results every race will keep things profitable. Scalping in particular is far easier over the Cheltenham period (in the festival races at least anyway) so it’d be good to bear this post in mind and just sit outside the prices managing your position efficiently.

The festival is one of my favourite weeks of the year.

Not just because of the increased profit available but because of the atmosphere and hype on the TV. It brings that little bit more excitement and buzz to trading the afternoons. If you have been around the block a couple of times and traded the festival before you’ll know the excitement I’m talking of! Keeping that discipline makes all the difference although I know already there will be a couple of squeaky bum moments where I push it.

This year I’m going to focus my efforts on Betdaq for the big races with there being no Premium Charge. On the whole the liquidity there is pretty good over the weeks events and I’d expect it’ll be far easier to make a good result on there that actually allows me to keep all the profit instead of a bigger result on Betfair where I have to give a chunk of it away in commission.

I’m just pondering on the idea at the moment although I think there may be room to treat myself with another snowboarding holiday between the Cheltenham Festival 2015 and april. Last year I did exactly that and didn’t feel like I’d missed out a lot. If I do go it’ll probably be a last-minute dash so I’ll just wait and see how it goes first! This next week or so will be interesting to look out for any early market movements, who have you got your eye on?