I’m back at last, after a few delays on flights we arrived in the UK late on Sunday evening.

…after spending most of Monday sleeping I finally forced myself to work yesterday. Unfortunately I don’t have the above image to wake up to. It was the view from our back door!

The picture above there doesn’t do it justice, but the water from the back door of our beach villa was literally 30 metres away!

Meedhupparu was the island we stayed on. I’d never been to the Maldives before, but id guess it’s probably one of the better islands to be on for various reasons. From speaking to other guests, some of the other islands tend to be limited, with very little to do. A mixture of island size and reef’s within the water  limits what you can do on some of the others.

This one though, had stacks of excursions to do. Diving, water-sports, snorkelling, several bars (my personal favourite), a couple of restaurants and still loads of space to chill out. It wasn’t particularly busy either.

I caught the sun a fair bit (burnt to a cinder). As one the waiters said after pointing at his own skin ”same same but different”. By day 4 I was peeling, despite having loads of sun cream on. That aside, I really couldn’t fault it. I’d recommend it as an island to anyone that was thinking about going.

Being a typical bloke I didn’t take all that many pictures but you can see from the pic’s below, it was absolute paradise! 10 out of 10 for me. I’ll definitely be going again at some point. 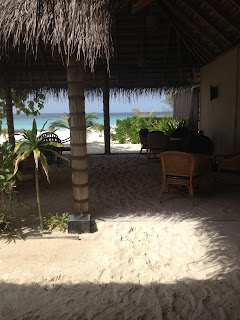 Above is a small beach bar by the water (spent quite a while in there).

Back in the Hot Seat!

So after a day of feeling jet lagged, I managed to tear myself out my pit to trade.

Motivation wasn’t too bad considering, although I thought I’ll just take it steady. Warming back into things after 10 days off, I thought I might be a bit rusty. Turned out to be quite the opposite!

Yesterdays cards were not all that bad in terms of quality, today should be better (York). I think the biggest thing that helped me yesterday was; I really wasn’t all that bothered about making a lot of money and had little to no expectations for the day. For that reason, I didn’t even really check my balance or progress until the end of the day card!

Was a little surprised as I knew I was going ok but not quite that well!

Anyway it supplied me with the motivation to carry on, so I did! …come 6pm I was feeling a little drained, and by 7pm I was losing the will to live.

The only thing that spurred me on was the fact I might break my personal best for a single days trading. As dangerous as thinking like that can be, I just about managed it!

First day back, who would have thought?!

I realise there is a lot of opportunity on offer with the better racing in the evenings picking up around now. The markets felt a bit more fluid too, so I took a trip to Tesco after to stock up on isotonic drinks and slow release energy foods!