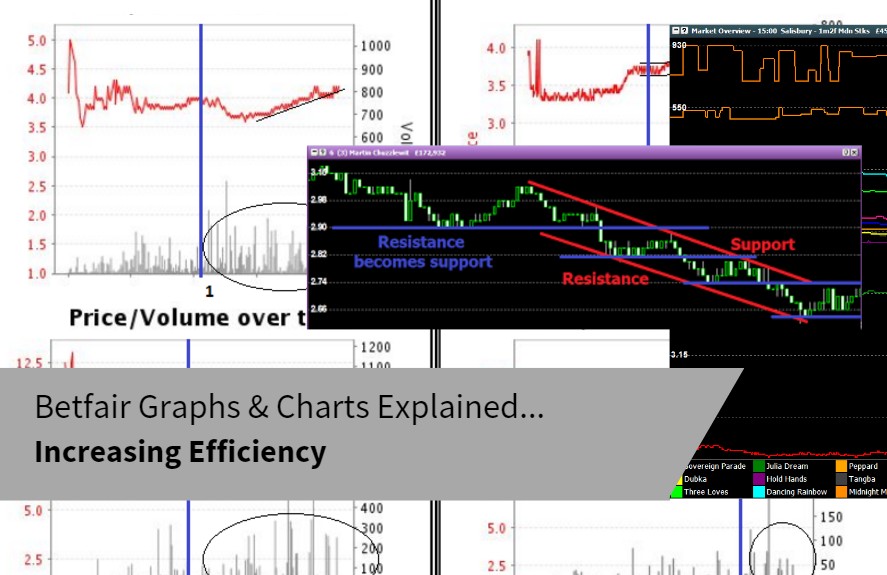 Initially Betfair graphs can appear confusing, but they don’t need to.

In this revised and updated post from, it covers:

Looking for detailed on charts and graphs? Sign Up & Get extra info direct to your inbox now…

It’s a common misconception that Betfair graphs are of little-no use. There are occasions where they don’t provide much assistance, although more often than not they are a great. But only if used correctly.

The reason most people disregard them is because there’s no time stamp. I’ll admit, that can be frustrating – especially when you’re starting out. Understanding everything else is hard enough!

So, how exactly do Betfair graphs work? Check out the image below. 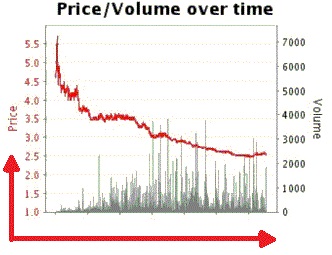 First of all, you have price listed on the vertical axis, and time on the bottom. The confusing bit being; there are no time increments added to the graph. It’ll become apparent why new traders are easily confused because of this. As usual, being informed can save you a whole lot of hassle (and financial loss).

Pricing is simple to understand, with the increments in price being up the side. In our example you can see the price has followed the trend quite smoothly, from 4.5 into 2.5.

So what are all the little grey bars about?

Traded volume is expressed by the grey spikes from the bottom up. So you can see; there was a whole load of money matched shortly below 3.5 (what time that was, we don’t know). That’s pretty simple, now we can look at actually understanding what this information means.

How to Read a Betfair Graph

First it’s important to point out; information shown on any of the Betfair graphs is purely historical data. Just because something happened, doesn’t mean it has to carry on. Fortunately patterns do tend to repeat themselves though as I’ve learnt over time.

The hardest part of reading a Betfair chart or graph is comparing it to the other outcomes within the event. Particularly in horse racing markets where the markets are more sentiment based.

Traded volume is often linked to the price movement as you would expect. When that was isn’t always clear. However, in some instances it can be that little bit of missing insight you needed to finalise a decision. In theory, traded volume should pick up considerably within the live-show (final betting show before the race). Large amounts of money matched before hand can sometimes be a pointer. Especially if it’s completely disproportionate to the rest of the markets activity.

Going back to our Betfair graph above, it’s likely the live-show started around about half way on the chart. 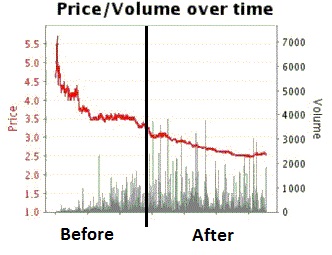 See how that’s confusing? the first half could have been 5 hours leading up to the race, where as the final 10 minutes are the other half. Not ideal if you’ve turned up with a few minutes to spare, over time it becomes easier though. Particularly when you’re aware.

Why Graphs and Charts Are Important

So you understand what they are, how to briefly read what’s happened before you turned up. But why’s it important?

Like I said previously it’s just an indication of what’s already happened. But when used in conjunction with other indicators it can be the confirming or denying signal to pulling the trigger on that winning trade. Information is key, there’s nothing worse than missing out when the evidence was right there under your nose all along!

In markets where there is lower liquidity the Betfair graph can be a little more tricky to read. However, it’s a double edged situation as large gambles are likely to stick out like a sore thumb also.

This leads me on to support and resistance quite nicely…

Support and resistance is often a lot clearer when expressed on a chart or graph.

The human mind finds it a little harder to track when watching the ladders alone. Looking at the image above it’s quite clear how a previous resistance point within a betting market then becomes support, after breaking. Obviously it’s just a good example, it doesn’t always work out like that. But again, it’s another point checked off to support your trading argument to enter or exit.

Standard Betfair graphs aren’t so clear when it comes to this sort of thing most of the time, but if you skim back to the earlier graph displayed you’ll see similar patterns (a lot tighter packed).

Either way, the graphs can be of use in most instances. Just another string to your trading bow…

Here’s  an original post on how I interpreted things back when I was just finding my trading feed (a newbie trader if you like).

My most favourable approach is to look at the Betfair graphs as an overall indicator of the market.

Not just a short-term one trick pony! If you base a trade purely on one graph it doesn’t make too much sense to me as the whole market works together, sometimes resisting each other (prices) and sometimes spurring each-other on.

Below is a pic of the top 4 heading the betting in on race. I did rather well in this race purely because I interpreted the Betfair graphs correctly. An ideal situation! 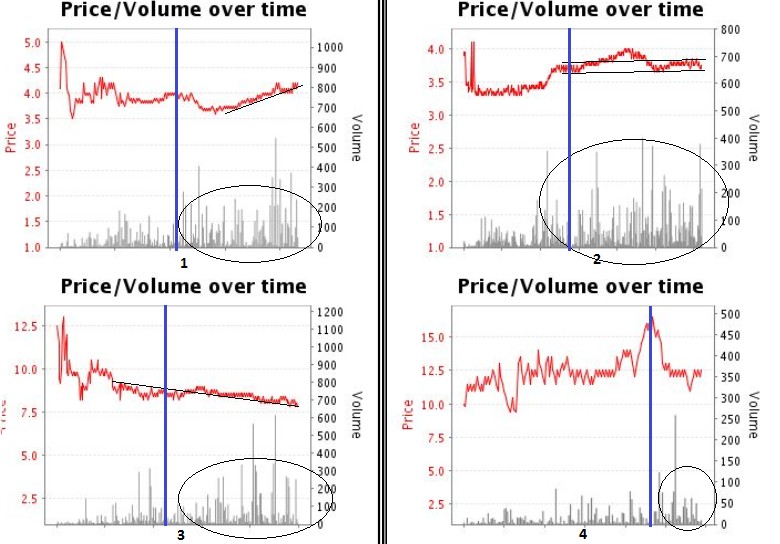 (Betfair graphs, look how they relate to each other – click to enlarge)

So I took the screenshot of the Betfair graphs with 15 seconds before the start for full effect.

The blue lines show where the Betfair graph was when I first opened the market (with about 8 minutes left to go). To the left of the blue line is of little relevance in my opinion (I may be wrong but at this stage but I’m focusing purely on the starting shows).

After a minute or so of watching it was obvious this was going to be a scalping type of market. Unless anything major cropped up with big orders coming in late on. There wasn’t a clear trend.

It’s likely there was a lot of trader’s on runner 2, as their was a lot matched on this runner without a great amount of movement… the market was ‘ranging’ so I left that one alone.

Runner 4 was of no interest to me as the fill rate was going to be poor at that price. This left me in bit of a predicament, if I was to get caught on the wrong side of things (turnover is safety in my eyes). So that left runners 1 and 3, the slightly more interesting Betfair graphs if you will.

Runner 1 was the Fav according to all the bookies, it had shortened slightly. It couldn’t have been too popular though, as support never came and it drifted shortly before the off. When volume increased it started to drift at a reasonable rate. So as soon as that happened I was sat there waiting with only one thing to do really…. back runner 3, playing it defensively.

In all honesty it was an educated guess into the markets. Looking at the current activity the whole time. I wasn’t ‘certain’ like people seem to think traders are most of the time.

I rode it from 7.8 to 7.2 taking a scalp or two on the way. Only a few ticks but at 0.2 a tick it doesn’t take a lot to make money. Reading the graphs seems to work a lot better for swing markets rather than the scalper’s I find. But the main point I want to make is; a lot of this conclusion come from looking at the bigger picture. How everything was fitting together, or not in some cases. If I’d just looked at one graph I’d have been quite lost… even more-so if I wasn’t even aware!

On Sunday I was fortunate some spare time. It was a slightly better Sunday than usual with more betting activity in general.

Sometimes Sundays can be quite dull – but it’s the only time I have to trade currently. Adopting the slow and steady attitude rather than the ‘bigshot’ attitude produces far better results for me. I think it’s purely down to confidence but over time I guess I’ll understand more.

On a day where I have the ‘bigshot’ attitude typically P/L will be +/- £5 to £30 in a race, and less consistent. Less consistency catches me out every time!

The ‘slow and steady wins the race’ attitude I took yesterday is far better for me on a mental level. My maximum stake was £60 so I was never out of my comfort zone at any point.

Profit and loss shows what I mean by slow and steady. Only losing in 5 of 20 markets is a real confidence boost too…