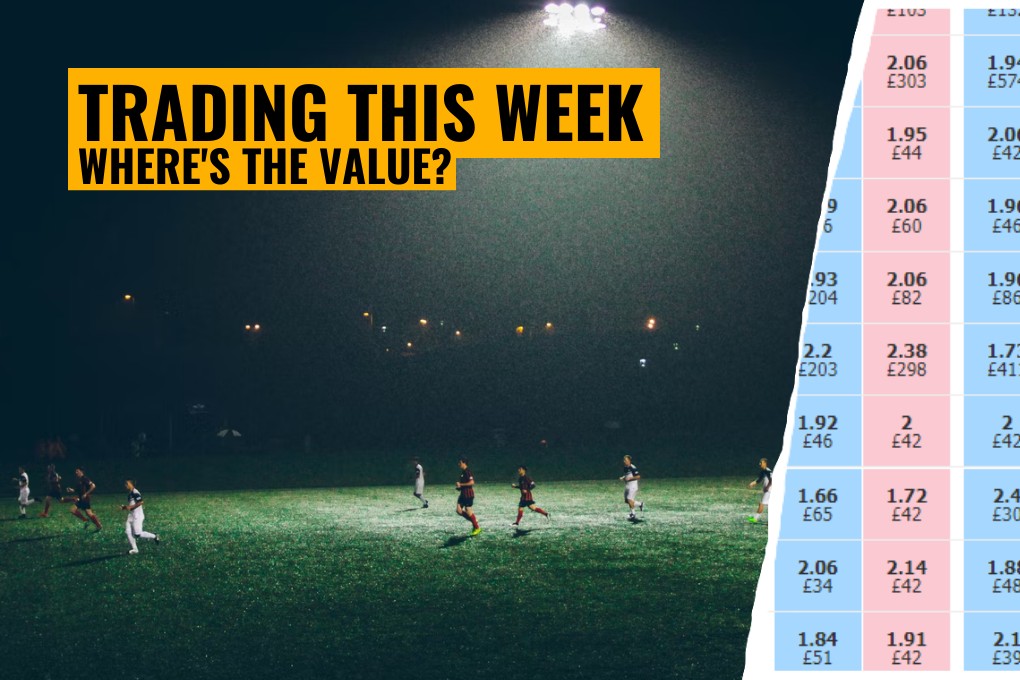 The Champions League Last 16 is upon us. You can’t beat some knockout football and regular readers will know it’s a point of interest, which is why there’s a whole Football Course section on it…

We have four fixtures on the opening week.

There are two obvious big games here, so they will suck all the liquidity. It’s wise to focus on PSG v Real and Inter v Liverpool but don’t rule out an opportunity from the other games, just factor in there will be fewer casual punters in those games, and it might take a little longer to close positions.

Having done my research on Monday, here are my pre-game trading plans heading into the two days:

I have no major angle on the Sporting Lisbon v Man City game. City is trading short at 1.31 anyway and over 2.5 goals is around 1.62. To be honest, I can’t see past City for the win here, but I’ve no interest in backing them at the odds. I view this game as a wait and see opportunity – leave a tab open in case something mad happens and we get some value on City but otherwise, I can see a straightforward win. City has scored most of their goals in the Premier League this season between the 61st and 75th minute. Maybe if we reach 0-0 there my attention will perk up but I doubt Sporting Lisbon can hang on for that long. That being said, they don’t concede many first half goals in Portugal, but comparing the standard in Portugal to the Premier League isn’t something to waste time on!

PSG v Real will suck in all the liquidity tonight. Every casual fan and bookmaker will be focused on this game. I think it will be really good for tick nicking, but you’re going to have to be careful what market you decide to do this on. The natural tick nicking tactic is under 2.5 goals and a slow start, but these are two of the most attacking sides in the world. I just don’t fancy having a large stake on unders here, not at least until we see how the first ten minutes goes anyway.

The angle I like here is the PSG lay. The pundits are going to say Real don’t come into the game in good form and have dropped points, but they have been playing top-class football. They created an xG of 5.24 in a draw against Elche and then 2.30 in a draw with Villarreal who have actually been one of the most in-form sides in La Liga lately. I think Real are on fire at the moment. The results might not reflect it, but they are playing excellent football. PSG, on the other hand, haven’t really put it all together yet. They have some amount of stars, but they aren’t really playing as a team. They have the French league won, but that standard is shit. Let’s see how they fare against a top-class side here because I think they’ll come up short. The 2.06 is too short for me and I’ll be looking to ride the momentum as they drift out – not too keen having a large stake on this early because the market won’t move too much, but when it starts going it will go quicker than usual IMO.

Wednesday sets up as a very similar day to Tuesday. Bayern Munich is heavy favourites in one game and Inter v Liverpool will suck on the liquidity. Bayern isn’t as short as Man City though and I’d be keen to monitor their price a little closer than Man City on Tuesday. Unfortunately, Infogol don’t cover xG stats for Red Bull Salzburg so it’s hard to fully commit to anything here. They won their three home games in their group against Lille, Wolfsburg and Sevilla but then again we’re talking about Bayern here. Salzburg played very well away to Sevilla in the group stage too, so maybe this won’t be easy for Bayern but again this is very much a game to only tune in if it’s 0-0 after 60 minutes. It might be worth watching the Compression Points section of the Football Course again before this game.

In the Inter v Liverpool game, I can see Liverpool winning but the best strategy for this game will be the under 2.5 goals scalp/trade early in my opinion. Although Inter are at home, they will start this game will classic Italian tactics of being quite negative. They know how dangerous Liverpool are, and I can see them just wanting to feel their way into the tie. There’s a long way to go with two legs after all, and conceding an early goal is a disaster. Not only that, but Liverpool haven’t been scoring very early in the Premier League this season. The 0-15 and 16-30 blocks have been their lowest goals. I should note their highest is the next block leading up to half-time, but I will be out of the market a good bit before the 30th minute! Over 2.5 goals are trading around 1.75 at the moment, and I can see this market flipping reasonably quickly. Everyone might be expecting fireworks in a top-class fixture, but I feel we’ll have a boring opening 20 minutes and the market will go quicker than usual towards unders.

Hopefully a good two nights ahead. Let me know on Twitter your best angle of attack each night! I reckon the under 2.5 goals early trade in the Inter game is the best option of the week, but let’s see what the two 90 minutes throw at us!