Well, the Cheltenham festival 2013 is over…. that went extremely quick!

I don’t think I’m alone but maybe I expected too much? Next year I’ll make a conscious effort not to get so over-excited. Without a doubt, greed left me short in the pocket this year.

I didn’t particularly enjoy Cheltenham this year, not like I should have anyway. It always seems to happen at once to me, but it’s just how it goes I guess. This week I was heavily burdened with personal drama, meaning I didn’t trade half as much as I should have. When I did the markets didn’t get my full attention. It’s a real shame as the week only comes around once a year. Although I’m happy enough to still pull an average kind of weeks result from Tuesday – Friday (I suppose it is only 4 days work when you look at it like that).

I traded only 66 races with 5 of them on Gold Cup day. My average return per race has increased drastically on previous years (+£25.63). 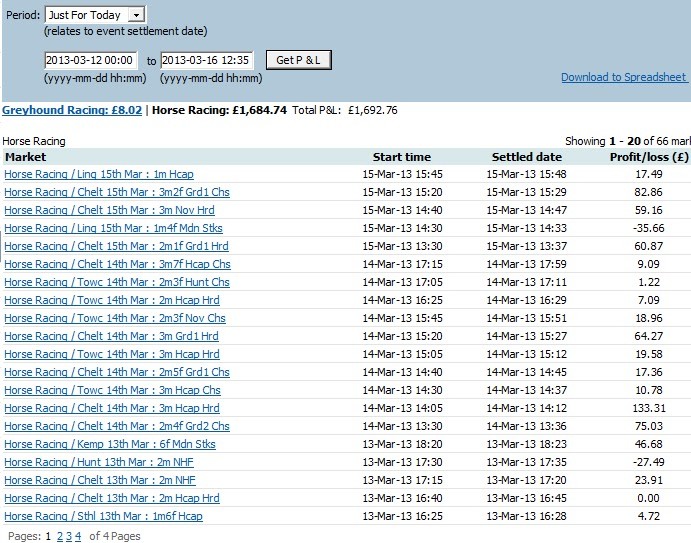 The Cheltenham Gold Cup race I found utterly frustrating!! Like, beyond belief…

Reason being; I just had to keep scratching my position on the runner I was trading. Possibly 3 – 4 times I found myself in a position with an entry 100% filled and the exit I could ‘feel’ was right on the cusp. Then the price would move away a tick. On the stakes I was using it just wasn’t worth taking a risk. In highn sight, had I been on smaller stakes maybe both sides would have been matched.

I don’t believe in taking un-necessary risk so I did the right thing, but it was really frustrating. I guess it’s only one race of the year, so if you have an ‘unlucky’ time of things it’s just probability doing its part. However, due to staking heavily it meant I didn’t have as much flexibility. Next year I’ll have a bigger bank.

If I’d have got them few fills matched the Gold Cup results would have been around the £300 mark.

It just wasn’t to be this time around though. Had I kept stakes smaller I may have gotten away with a little extra profit and less stress but I guess you gotta try these things from time-to-time. Especially if you want to try and pull some big results out of a single race!

Anyway a bit of good fortune was missing this time but things could have been way worse.

A similar thing happened on Wednesday. I think it was with an extremely short priced runner and a massive order (felt physically sick after that one). If that one order had been filled it would have been deep into three figures, but I guess there’s a lesson in this for me. Being greedy and trying to get one order through of a ridiculous size isn’t the best idea… if it goes wrong it could really hurt, but scratches aren’t all that exciting either. More patience required.

Anyway there’s always Ascot and other big meetings just around the corner. Should have my external life in good order by then and be ready to fire on all cylinders!

Hope everyone had a good Cheltenham! it’s always a bit of an experience for those on the first time around… like nothing you’ve seen before!

This week I have recorded plenty of the Cheltenham races I did which is always a good idea for anyone, a couple of which I may share at some point.

Related: How Handicap Racing Works – Beating it as a trader…