So the days are starting to get shorter and the evening racing has ended, its all looking a bit glum if you have to balance your trading with a normal job too! Just recently its played on my mind a little as its going to become a strain for me more and more, particularly as the racing starts to finish even earlier.
Although i’ve done really quite well this year i don’t intend to be in this position next year where i don’t want to quit my standard job as its not all that bad and the hours are good with it providing some degree of security for me should disaster strike with the trading. But at the same time with the results im returning trading it just dosent make sense to be working for far less than my betfair trading can provide me with… a bit of a crossroads really. I think over the coming months i’ll be squirreling away all that i can so i have a nicely sized reserve for 2013 that will alow me to go for it with both hands without having to worry about money to fall back on.

Over the last couple of days i’ve had a small amount of time to trade as the day cards end depending on when i get in from work, today i got in a bit earlier than usual although had to do a couple of other bits inbetween a few races. What has struck me over the last 2 days though is how much of a difference it really makes to results when i make a contious effort to sit down and really focus, concentrating on the task in hand rather than being a little blazay flitting from one race to another not giving it 100% of my attention!!
Maybe this is because i know i only have an hour or so to trade?? Either way its something i think i’ll keep an eye on more than before now as its probably more important than im giving it credit for. The markets felt pretty average from what i saw today which left me thinking also throughout the winter i could possibly manage without too much hassle…..  looks like i could be making some difficult decisions early next year!! 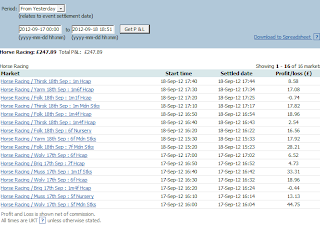