What a messy few days! in more ways than one way. Ridiculous.

Where do I start?…

Friday I had a complete mare trading. As usual started well and started to progress, the infamous ‘Bomber’ turned up and in once instance absolutely wiped me out.

I was high stakes scalping in the market when he took the price from 5.6 to about 4.0 in less than 20 seconds along with all my stakes at the same time leaving me almost £300 out of pocket in one race. I was absolutely fuming.

I carried on and there was more of the same, the end result being I finished down on the day to the tune of about £50, also I messed up on the Tsonga game once more… maybe learning the Tennis while doing this challenge hasn’t been the best idea but still I want to carry on, these things rarely come quickly! 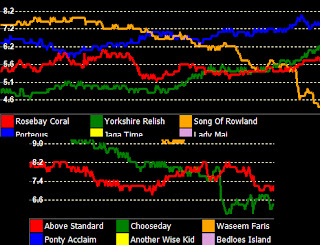 Two instances where I got stung hard…. Savage drops in price

Saturday & Sunday I took off to attend a wedding which I mentioned in previous posts, the wedding was really good. Probably one of the best I’ve been too!

However, I managed to stay up drinking till 3.30am with the groom which left me feeling slightly worse for wear!

Sunday trading was a definite no go, wedding breakfast in the morning but due to the good evening of drinking previous I deemed it better off just left alone!

Monday… again I didn’t feel great and the cards looked not so brilliant. I managed to drag myself to the computer to trade the evening cards a little which seemed pretty good.

The infamous ‘BOMBER’ shew his hand again, which this time was a lot easier to play as he was systematically dragging his oversized bets down in the market mainly on the favourite. This kind of behaviour makes it far easier to read and profit from…… hence my profit and loss below!

However, if you look to last race I had become a little trusting of this behaviour and got on for a considerable stake, just before he removed his bet… *heartbroke*

The market erupted into anarchy as you can imagine probably with lots of other traders thinking the same….. ‘he’s just going to drag this down’…… all I can say is ‘Ouch’ and computer off time, all in all its been a terrible, terrible week.

Looking forward to Ascot starting today although I’ve got my work cut out for me now if I’m to hit this £10k target and can’t have any more time off to get drunk!

Probably been doing that a bit too much.