Well, I thought Monday was a bit mental…. not even close to today if I’m honest.

I learnt a huge amount today, made a lot of mistakes of which some new and some very old (must stop those!).

All in all, I think its important that I sit back from this situation, really make note of what’s learnt, regroup and apply myself in a productive way. Only fools repeatedly make the same mistakes.

Something that’s not so well documented on the internet about Betfair trading – I find it can mess with your head, sometimes one bad situation or a few mistakes can really have a lasting effect…

I’m not going to let that happen to me, as it has many times in the past. I think a lot of it comes not from the loss of money but the thought of not being right, being a failure etc. Even if it’s on a subconscious level!

For example; today at points I really let things get to me that weren’t a big issue, well didn’t need to be anyway. I’ll try to explain…

I started the day with some Tennis trading. I can see there is a massive upside to this if you’re any good, and so I’m really keen to get my feet wet…

I can see clearly how to profit from it at times although not all the time! so then the challenge is not trading when there is no clear-cut opportunity! easier said than done…. look at these results….. (it hurts when you make the same mistake twice…. see Tuesday’s post) It may be considerably more time consuming to learn, although I should make a point in the future to do so.

Ok so couple little scalps for the first two results…. the ones after that I was continually applying my stakes only in situations where I deemed it the market would move significantly more if I was correct than if I was not. Also I was keeping it to the select trades where I actually thought it would happen most of the time.

It seemed there was more opportunities for that than you would realise, very interesting and really got my hunger for the tennis trading going! And then just like the other day I transformed into “Jonny-know-it-all”. Completely ignored my method of approach and staking plan, started chucking about bigger stakes, one minute I was going well, the next Boom red screens all around!

For all the games but the last I was using £25 backs and or £25 liability per trade, the last one I ended up on £150 liability at one point which was about £3k stake, ridiculous… this highlights the need for a staking plan too.

Also you will notice the times of the games, I was continuing to trade the Tennis in between the racing markets, something else I have come to realise is utterly foolish (what is wrong with me?! Why’d I do it?).

It takes my concentration away from what I do best at the moment (the Horses) and even worse I found when I had messed up on the Tennis I was left in a bad frame of mind for the horses races following!… again like I said not because the money, more because I felt I was making good progress with my application to the Tennis and then bam in the face epic fail. For this very reason I have decided from now on I’m either trading the horses or the tennis! not trading the horses and keeping an eye on an open position or a game point on the tennis at the same time! 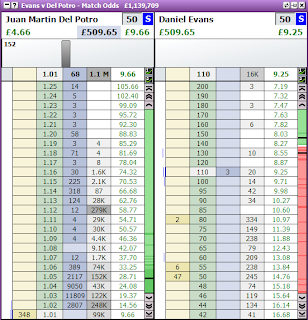 The odds on the Tennis I have come to realise are my friend.

I think I will be looking to evolve my strategy more and more for when this kind of situation arises! unfortunately today I missed out and lost a fiver as Del Potro won the game. However, at this point in time this was looking like a really good trade to me as Evans had seem to come alive in the game and started to respond well!

As I took this it was actually teetering on Evans breaking Del Potro’s serve in the last game of the match, had he broken it and then gone on to serve in the next game I could have seen a really good risk/return ratio pay me off…. something to think about at least!

Glad I came out on top but I really wasted a few pennies today. The racing quality was pretty good throughout the whole day and evening… it seemed to slow down a bit as usual towards the end but still.

I’ve highlighted my 3 little tantrums as it were or lapses in concentration… the first two I would say weren’t all that bad but needn’t of happened as they did, the tennis has a negative impact on what I was doing in terms of how I felt and I think that was half the reason it happened as it did.

The third however was ridiculous! I knew I was getting tired and a bit frustrated with the day’s labour (tennis and all) and tried too hard, once I got into a bad situation I entered again on a bigger stake still… with no good reason, I’ll add and got hung out to dry, being my stubborn self I carried on and continued to waste a few more quid, popped out for a bit and came back to salvage a little in the last few….. I think I’m better off-putting today behind me really.

I’ve got plans for this weekend so I’m looking short on time for the challenge at mo, I think I’ll have to put in a solid stint to the end of the month if I’m to manage it at this rate.

Has anyone else been doing the tennis? How have you found it ?