So the first day of Ascot has come and gone! the warm-up day as it were.

I fell foul of some of my own usual advice on the first day ”take it easy and work into it”.

I over-staked a bit early on and made a monumental cock-up when I was keeping an eye on the wrong racing channel for the runners going to the start.

Obviously, I realised when it went in-play and I was still happily scalping away! Rookie error but it didn’t cost me too much, although enough to hurt (see Stratford result).

All in all, I found the racing at Ascot to be ok although not as good as I hoped. I had a couple of decent ones although mainly mediocre, it seemed there was a lot of money in the market for the first day which I felt made it harder to get in and out of certain positions.

Still, come the end of the day it wasn’t a bad result.

I had a cock-up early evening too that cost me just over £150, I need to cut these ‘blips’ which have become a bit frequent lately out for good as it would have a massive effect on the weekly result. 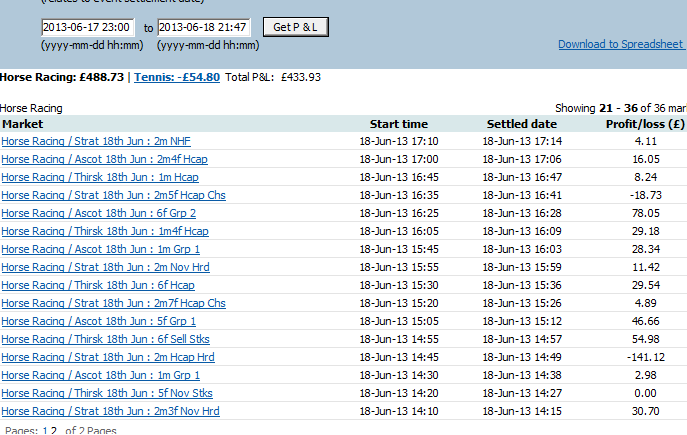 I was really unfortunate on the tennis front yesterday as the game I was trading was suddenly halted, by the time I realised what was going on it was too late and I lost my whole stake! it was called off due to one player’s submission through reoccurring injury, free money for the court-siders but these things will happen and I’m still determined to persevere with it!

Big Brother has recently started and although I missed the first few episodes I’ve had an eye on it, early markets always have wrong prices and I’ve placed a few speculative orders (very small at this stage) although I’m hopeful I can get some early green on it in the next couple weeks to play with later on.

My best order match so far seems to be on Sam when he was favorite at 4.9. The only other thing that interests me at the moment is Friday’s eviction where I wonder if it really will be Gina that goes.

For Betfair Trading Video’s – See This!