This weekend was a bit of a blurr as usual! had the last day of the month off but it was really worth it as I spent the day jet skiing on a friends boat… awesome!! Made me think at some point it would be wicked to have one, anyway that’s in the distance for now Ha!

I spent the latter end of last week focusing on the tennis once more, and although its cost me in learning this month I think them last few games I’ve started to see the light.

The -40 was carried over from a previous day, the -27 was me taking a punt on a match point that lost (stupid thing to do) and there afterwards I started to find a way in, patience is key in tennis for the longer term that’s for sure!!

So hopefully its the start of a new sport to profit from consistently. 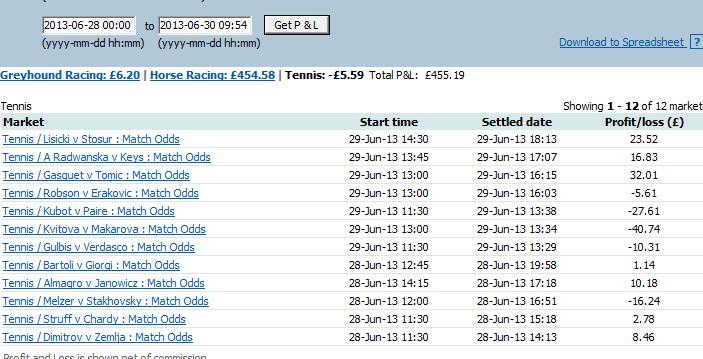 The horses felt pretty thin on the whole, but it’s not surprising the week after Ascot I suppose.
I have really enjoyed learning the tennis and probably need to kick on to get some money in the bank with the horses too but its hard burning the candle at both ends!

So, the month in summary…

I started the month with good intentions and the hope of having my first 5 figure month.

I still don’t think it was impossible at all although as the time went by, mixed with some silly mistakes with the bomber evenings down the pub and learning the tennis I realised it wasn’t to be this month but much like Anon said on previous posts im already winning and there’s no real need to be pushing myself for extravagant results at this point in time.

If I crack the tennis on a larger scale I would have thought along with all the big events and racing throughout the year it wont be so hard to pull them kind of months on a fairly regular basis.

I also didn’t plan to have as much time off this month but the good weather in the UK isn’t so frequent lately so felt I had to make the most of it! all in all it’s not a bad result as its more than I would have been making in a couple of months had I been at my standard job previously!! But there is still plenty of room for improvement! 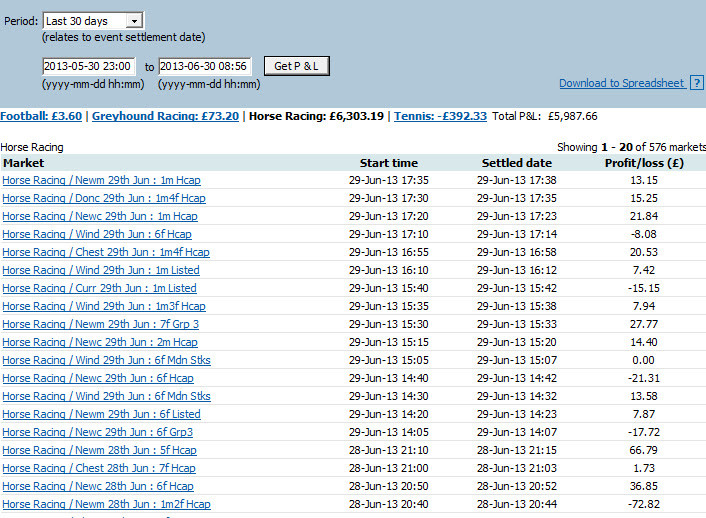 I’ll probably still update from time to time as its been nice to be blogging a bit more again, possibly ill chuck out a few pointers on coming posts for the horses and update with my tennis progress! hope you enjoyed this month even if I didn’t meet my own expectations! Comments Welcome!