Felt like it hotted up somewhat yesterdy and late on the turbo cheltenham fill rate was experssed at times, i was going pretty well from the start although much like tuesday i was caught twice and was pretty much game over, david pipes second string in the 3.20 caught me a right cropper, and from the reaction i wasnt alone either a couple of whoping bets come in late on and completely cleared me out taking my whole bank and a few ticks more.. my biggest red in a while, hey ho tho these things happen… i followed it up by being a bit frantic inplay on one the other races and that was £130 down the shitter. 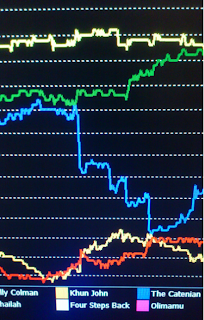 After bit of a break and fueled by utter boredom i thought id test out a couple of the kempton races of an evening expecting very little as the volume of bets this week will be drawn to cheltenham and then Boom! bombs away, the mad bomber must have had a good win on the cheltenham i would of thought as he was hell bent on throwing away wads of cash, first race i missed the boat, second i was a bit dubious and made a little off him and 3rd time around i nailed it… just shame he didnt show up after that, probably licking his wounds somewhere… hey ho thursdays a new day and likely to pick up somewhat before the big dipper on friday!