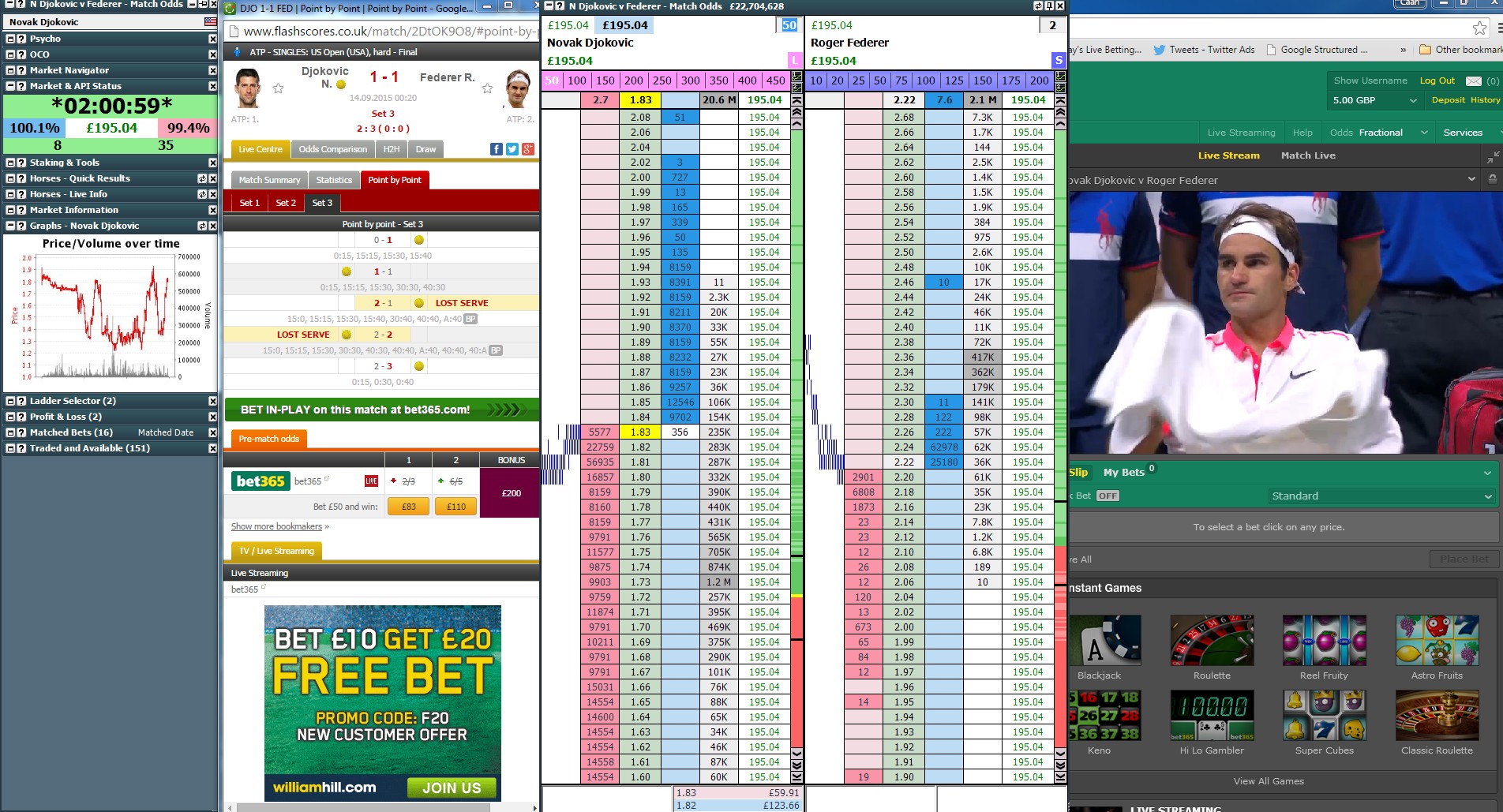 I don’t know about everyone else, but that wasn’t what I expected (at the start at least).

After what seemed like forever, the ATP US Open final was under-way. I nearly completely skipped it and went to bed with all the bad weather delays.

I’ve always enjoyed trading a little tennis over the bigger events. But it’s been hard to fit everything in, in-between the busy horse racing schedule.

Making a point of focusing on tennis over anything else this last week or so has been extremely valuable. I’ve built on some existing knowledge and angles into the market, and developed a couple of new ones.

The final got off to a bit of an unexpected start for me. Federer was slow to move, and didn’t seem with it at all to me. Once his serve was broken very early on I was left in a bit of a quandary.

The price was right, the match had only just started, but taking on Novak at short odds didn’t really appeal. Hesitantly I laid Novak, all be it at a reduced stake to normal. It turned out to be a good thing with the break back and had some green to play with quite early on… I wasn’t 100% confident though, had the odds of being much bigger I doubt I’d have entered at that point.

Much of the first set felt frustrating to me. Mainly because Federer seemed to be giving points away.

Toward the end there was signs of some enthusiasm at last, I still wasn’t completely sold on a drastic improvement. When Novak come to serve again at 5 – 5 I laid him up…. this ended up being one of the longest and most frustrating trades of the entire tournament for me. I was looking for the break, and wasn’t going to trade out before…. it’s tough to not allow those emotions to the surface at time, of not feeling like you missed out on the opportunity. Check it out, point-for-point below:

During the second set it became clearer Federer was finding his rhythm, and for a while seemed like a no brainer when laying Novak at short odds… it worked out quite well for me. In past tournaments I’ve found it harder to hold on to a position for so long… I know others do when presented with this problem. I guess im in a fortunate position on that front, as I know the horses serve me well if I make a hash of things. Not feeling like I have to perform is an asset.

The mens final was a thriller to watch, although over the last couple of weeks I think there are other areas I actually prefer from a trading perspective.

Womens tennis seems to throw up a lot more opportunities, and a hell of a lot more breaks in serve. Although the mens seem a little more stable when approaching a match with a longer term view.

One thing I want to pursue in the tennis markets is the use of more statistics (situation specific ones). Obviously they are only an interpretation of previous results and play, but it can be comforting to see various players traits through the numbers when it comes to pulling the trigger.

Before placing big trades in the market with big liabilities I think it’ll be a must. Emotions surge to the surface when there’s more on the line.

Looking at the point-for-point game above, I wouldn’t be able to sit the whole thing out on a £2k liability yet.

Still, I really enjoyed it, and it’s good to have additional sports to trade…. excluding the rain delays!