Keeping with the times…

After just over two years of trading Betfair. I have come to a point where I am doing rather well.

However, as longer-term readers will know. It’s not been a smooth ride, more like a journey riddled with potholes in fact!

So what’s been the main change, particularly over this last year?

….well as I’ve said before, nothing and a lot, a bit of a contradiction but then again that’s just trading in general.

Rather like the aptly named Adapt and Survive blog by Sam Wilson I have learnt quite quickly how to harness my different edges.

How to apply them, or more importantly, when not to apply them in each instance. For example you just can’t just turn up and trade a Monday afternoon race in the same way you might apply yourself to the Cheltenham gold cup, and if you did your probably just as likely to lose on one that you made on the other (if not worse!)

Applying yourself in the same same way can play havoc with your mind too, for a long time I think some of this was my problem. I would become very frustrated with making a nice sum in one race shortly by a loss trying to do exactly the same sort of thing in the next.

Simply, in the long run it just don’t work for the vast majority of edges I’ve have found. I only know of one exception to the rule although its likely there may be more, as they say there’s always more than one way to skin a cat…

I’d say not accepting and making a conscious effort to adapt to the market is what accounts for pretty much all mentality related issues while trading, it’s quite normal to constantly want growth and improvement as it’s in the human nature, although in the markets that kind of thinking can trip you up. For this very reason im already trying to prepare myself for when the winter racing starts and the evening racing stops!

Last year I hit a bit of a cold spell, as I did when I’d not long started around about November if I remember rightly. I struggled for a long period wondering why I wasn’t able to produce the same as previous months. In a way its a bit of a shame as I think I’ve probably already peaked this year, a bit due to the markets and their capacity for what I do… unless I suddenly discover another way of playing anyway.

Ascot was particularly interesting for me, with the biggest week of my life having made over £200 on one race and £398 on another when the infamous bomber turned up!

On another note it’s Glorious Goodwood next week which should produce a healthier return than normal. Unfortunately I won’t have as much cash at my disposal to trade with as I wanted due to writing off my car a few weeks back and having to buy another… shouldn’t complain though, trading this year has allowed me to have plenty of things I wouldn’t usually, of which a fairly new car is one.

Had a go today, felt it pretty frustrating to be honest got stuck with a 50 quid loss early on that just aggravated me to be honest and wasted some good opportunities. It felt pretty thin for a Saturday, probably because Goodwood is next week, anyway wasn’t so bad for a few hours could have been worse…… 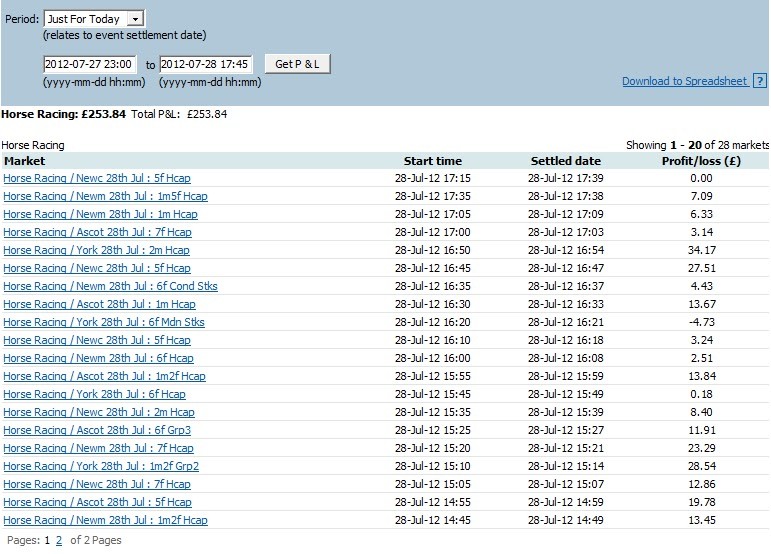 In my next post I’ll let you know what I thought of Goodwood’s markets… stay lucky!

2 thoughts on “Evolving Surroundings… Keeping With Them!”