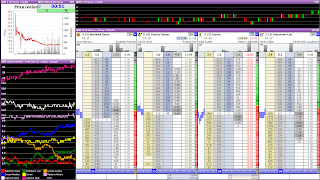 Another frustrating day…. i took this screenshot as it just about sums up my trading this last week, i think its most definately confidence related and more to do with my execution of trades than anything else, the red above was through getting an exit taken that i didn’t want before getting my entry in which then led to me jumping in to try and get some back making it a bit worse! … thinking about it now its just as one of the major problems with trading mark douglas mentions in his book – feeling like you missed out and being wrong initially.

I dont think its my decision making a such that is gone up the kilter but more the way in which im implementing it. To that end im going to go back through this blog to previous posts as this seems to be a previous problem that is mearly rearing its head again! I know i can get through this but its becoming very frustrating as the image above shows, these sort of situations seem to be happening alot lately and its often the type of thing that entices me to make a stupid move denting confidence.

Also as usual befair managed to make a complete hash of saturday, i stopped after a few as my nerves were shot to bits after previous outages and didnt want to risk it going down again…. all round one of the most frustrating weekends of a long time.